Sarah Kenyon was in London when this article was written, preparing for her interview for the Apprentice.  If there is anyone out there who does not know about this show which is now entering its 10th series let me enlighten you.  It’s a reality TV show where bright, creative people are all trying to do their best to impress Lord Alan Sugar and the prize is his investment to the tune of 250,000 pounds in their business idea.  This programme has developed from Alan Sugar employing the winner  as an apprentice in his company to today s version.  The tenth anniversary programme sees the continuation of the theme of Lord Sugar investing in the winners business idea and retaining 50% of the company.  A brilliant opportunity to have funding and advice from Lord Sugar and his dynamic team.  Of course all that depends on being the winner – or does it?  Many people enter this competition to give themselves and their business idea exposure and they often are not disappointed at not coming first.  Many of the ‘right’ people have seen them each week on the television and offered them business deals  way before the end of the series.  So if you are a bright, enthusiastic, entrepreneurial person you have nothing to loose.  If you are Sarah Kenyon who has already reinvented herself four times  plus had three daughters on the way – anything is possible. 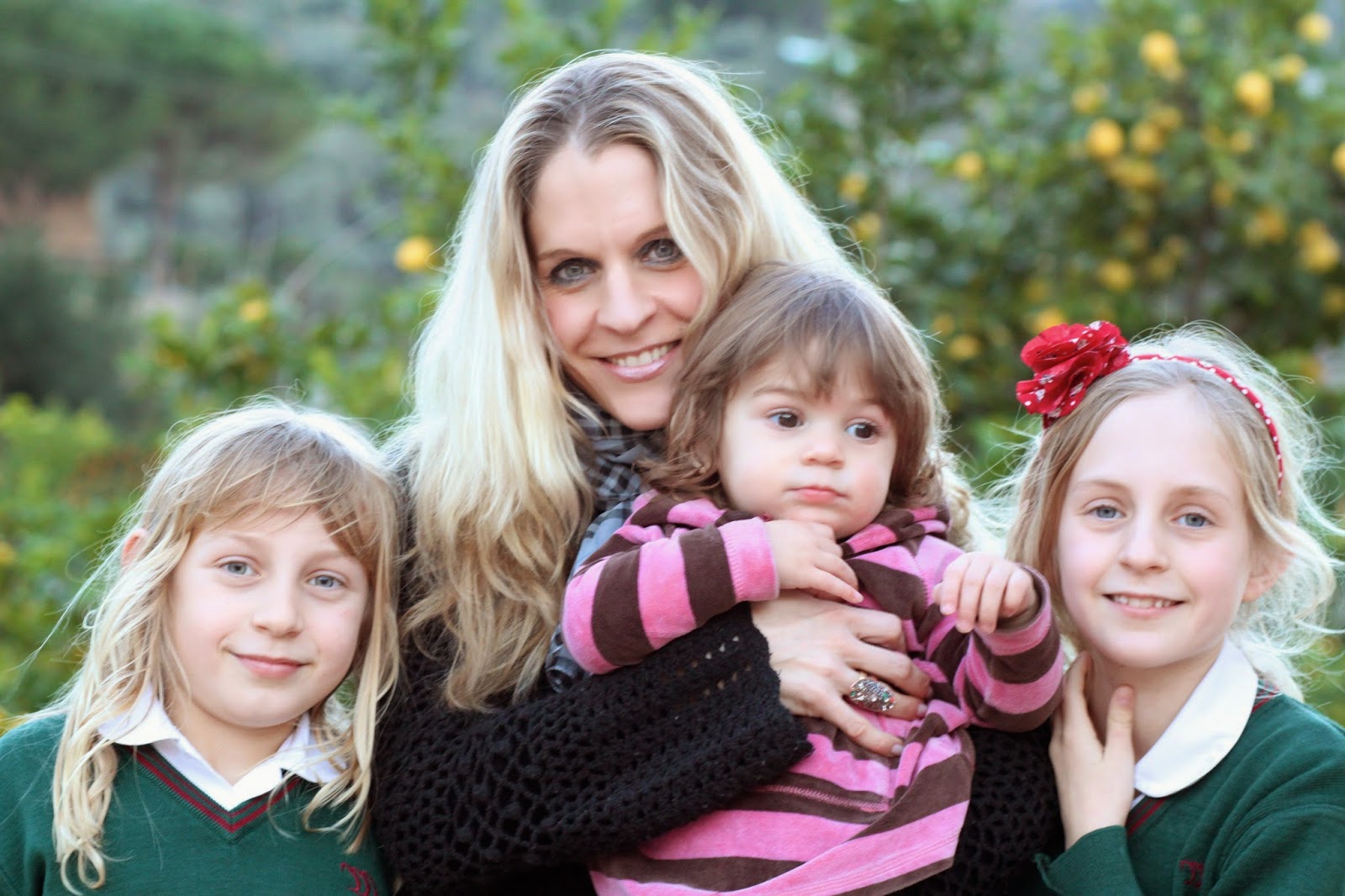 Let me tell you the story of Sarah – a gloriously eccentric English Speaking Solleric if ever there was one.  Sarah lights up a room and has a sense of style that is unique.  You cannot fail to notice her in the street, in church , on the dance-floor or in the supermarket.  She knows how to put herself together and everything always fits. The hair, the clothes,  the make up, the accessories – just a full package. She is self deprecating and doesn’t take herself too seriously and will tell you openly that some of her favourite fashion items come from Primark and from Soller’s favourite – La Boheme.  A Soller style Icon is how she is often referred to by others who would very much like to emulate her.  Her story of how she arrived in Soller and where she is going from here has been my pleasure this week and I am glad to share it with you.

Sarah is a musician, originally from Bath who had a childhood of music with her equally musical sister.  She started piano at age 5 and then the cello at 8 years old.  Music was her centre and it was not surprising that she won a Music Scholarship to a fine boarding school in Bristol.  An experience that she loved and didn’t want to end. Music wafted her through her final exams and into the Royal Academy of Music in London where her instrument of specialisation was the Double Bass.  If you know Sarah you will appreciate that a double bass must have been taller than her and certainly wider.  The image of her transporting this around London on the tube must have created many would be knights in shining armour ready to carry her instrument.  Her musical university journey took her all over the place playing and learning.  From concerts in the Albert Hall and  Kenwood to the many other venues that such a prestigious Academy was able to provide  – this was her musical world.  She got her music degree and her LRAM qualification to enable her to teach music and appeared all set for the world at her feet.  Her final recital, with her family, friends and university peers was a glorious moment and then she packed away her double bass and has never played it since.  She decided that she was very fortunate to have had all the wonderful opportunities that music had brought her but this was not going to be her career or her future.

A few false starts in the job market took her into the world of the Middletons -not royalty then but just children at the school that Sarah was a ‘boys School Matron’.  She reports that Mr & Mrs Middleton were lovely parents and a very happy family.  Then it was time to leave broken hearts – (love had got in the way) and head off to be taught all things Parisian.  In Paris Sarah thought she had found her spiritual home, class, elegance, a romantic language and the opportunity to write for an English Magazine aimed at the French people.  A wonderful time all round but her skill set was not refined enough for the future career she wanted so it was back to business college in Oxford to earn a few more qualifications.
The City of London was the next port of call and a stint with Goldman Sachs.  An all consuming role supporting the Pan European Sales effort.  Work and leisure became combined and she joined the many whose lives were taken over completely by their job and a burning desire to succeed.  The only holiday she took while working for them proved one that would change her life for ever.  A few city types went skiing in Andorra and Sarah fell for the Argentinian Ski Instructor whose next adventure was to run an Argentinian restaurant in Majorca.

Sarah arrived in Majorca in 2002 with two suitcases and a job with Engel Volks Estate Agents in Soller.  The Argentinian soon bit the dust but Sarah was grateful to him for the introduction to Majorca which she would never have had without him.  This was not somewhere she had ever been before and she had no pre conceived ideas other than to have a wonderful adventure and learn another new language. The ideas for a new business opportunity grew here and Sarah knew that her days as an employee would soon be over.  She felt too restless and full of her own quirky ways of doing things to ever be comfortable in a controlled environment.  The Soller Valley was (in her opinion) crying out for an Agency that would properly manage the holiday rentals market which was growing fast in Majorca. As a tax advisor’s daughter she followed the local advice and registered her intentions and her finances with the tax office in Majorca. She had no intention of doing anything other than working within the laws of the country she had chosen to live in.

Alongside the growing business came love and marriage with local English speaking Solleric – Chris Strickland.  Followed by the arrival of two delightful daughters who – would it surprise you to know  – play the piano and the violin.  Life was good for the family, the business thriving, the family well and happy and just the occasional niggle from the newspapers that all might not be well in the land of holiday rentals.  The ripple has now become a flood and there are invitations to discuss the ‘tax paid’ business with officials who have advised that things may not be quite as in order as she thought.  The Majorcan dream was beginning to turn sour for Sarah and a new idea was already forming in her busy mind.  One that would incorporate her innate sense of style and involve working with sustainable materials in a clothing venture.  Discussions into the night about the future for the family resulted in Chris encouraging Sarah to apply to the Apprentice and fly with all her new ideas.

To get an idea of just how radical an idea for the family this is I must fill you in on the stage of Sarah’s life I hadn’t got round to yet.  Sarah and Chris have split up and she has a new Partner – Danny and a third beautiful daughter.  They all live, together with Chris in a shared house and the children are very happy that all parents are there for all the children. Unconventional it may be but they all want what is best for their collective interests and their children even if it means closing up the home and business in Soller and settling back in the UK.

Sarah is a very unusual character and has determination, hard work and a certain vulnerability about her.  She is one of those single minded people that will make a success of whatever she sets her mind to.  The fact that she has even got an interview to be one of the Apprentice candidates is testament to that.  Thousands apply for this every year and as they need twelve people most are destined not to be successful.  So as you read this Sarah is heading for the Boardroom and the opportunity of a lifetime.

Sarah will succeed in this venture to develop simple, affordable, stylish maternity and baby wear leading on to a full range of sustainable  clothing.  It maybe with Alan Sugar’s help or if not she will do it another way.  This lady is not for turning – once she sets her mind to something!  I have a sneaking suspicion that she might be one of the ones that need to keep eight weeks in April and May free for this programme.  The combination of a business brain, a sense of humour,  capacity for sheer hard work rolled into an ultra stylish exterior and then you can’t do better than Sarah Kenyon from Soller.