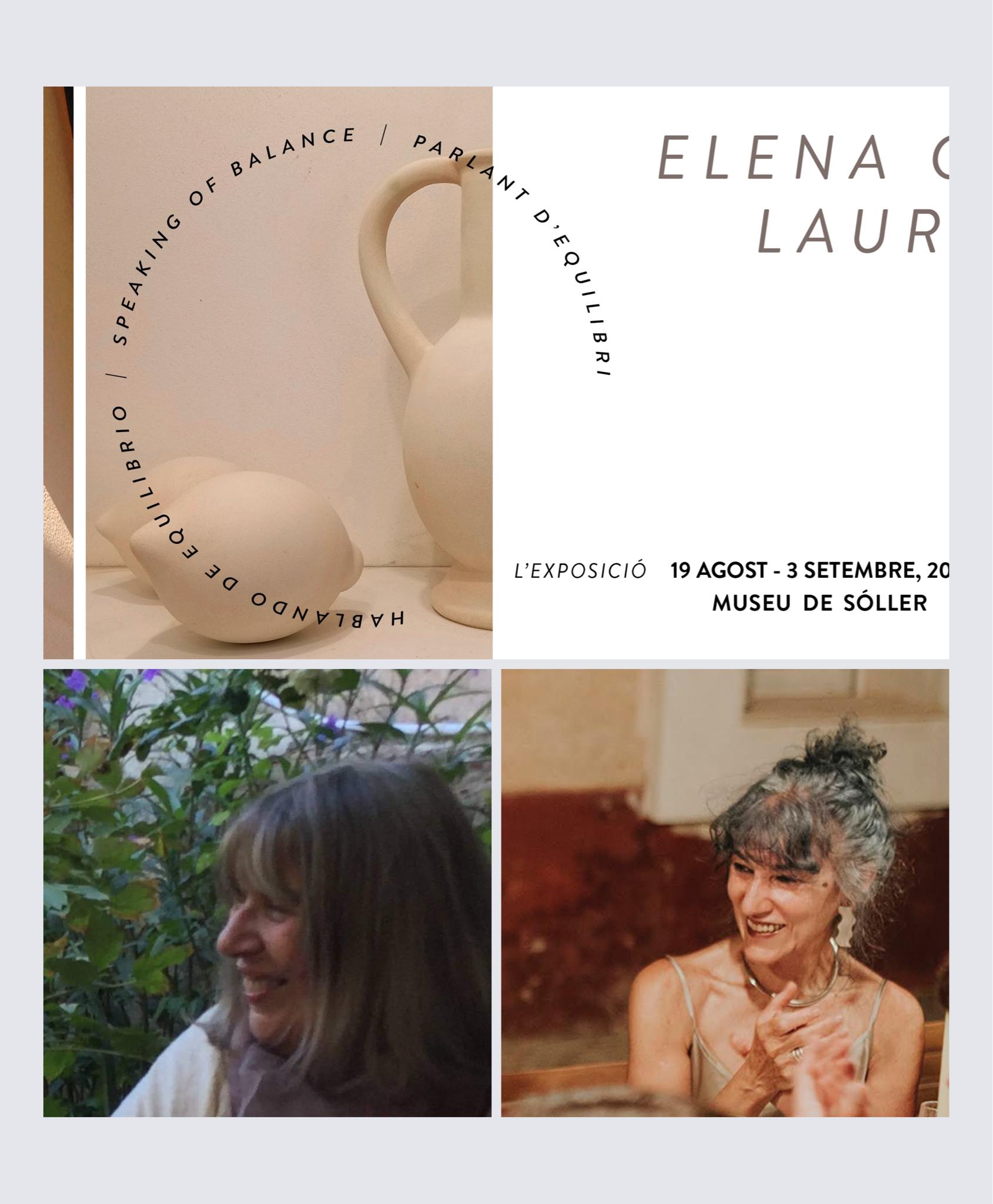 These two talents open a joint exhibition on Friday 19th August 2022 at 8 pm in the Museum of Soller.  Both famous in their own worlds, they work quietly in the Soller Valley emerging only when we shout from the rooftops that they must share their work.

We are so privileged they heeded the call and the Exhibition starts this week. A chat with them both reveals the depths they reach to find their true artistic expression.  This current work was born in unsettled times and speaks to us today.

Elena Castillo and Laurel Marx come from different parts of the world (Moscow and New York City), working in very different media, yet their artwork has a basic equivalence and symmetry at the heart of their practices. They each found a home in Sóller, and each other. Both have a minimal approach to their expression. Elena’s oversized objects from the world around her focus on their basic contours, highlighting the simplicity of form while achieving a deep stillness. Laurel eliminates extraneous information in photographic images, seeking to reveal a glimpse of mystery, and telling open ended stories in the process of reduction. Each artist seeks an ultimate point of balance before the work can be considered complete, the way a gyroscope can only balance when the axis is anchored.

LAUREL: Using photography as a tool, I explore layers, light and shadow. Since the narratives are suggestive, open-ended stories, it is the viewer who interprets the script. I am passionate about capturing the essence of a moment as light transforms the ordinary into something wondrous. I eliminate extraneous detail from the original image, seeking to reveal a glimpse of mystery in the process of reduction. As more is taken out, what remains is more charged. The line in the foreground is equivalent to a signature of intentions. It is the last stage of the process, providing a visible anchor and constructing a plane to slow down time.

ELENA: I love to sculpt, and have been doing it for as long as I can remember. I am still fascinated with this mysterious moment when a piece of cold clay, which becomes warm in my hands and becomes part of me, then suddenly separates and becomes independent as a newly born object, and even builds its own biography! My work is simple. I love the feeling of clay, I love talking to it as I work. I love the process. My objects are very simple because I see a lot of beauty in simplicity. I try to fill my sculptures with peace, which I seek in life but which I can only achieve in creativity while working in my studio. Everything in life is interesting to me. I love everything I see and I try to convey this feeling through my work. Each piece is filled with my thoughts, feelings and experiences. It is completed only when I achieve that concentration, that balance I am looking for. My still lifes are static paintings, my attempt to see and create my own world – a world of silence, peace, kindness and balance.

BIOGRAPHY – LAUREL Laurel Marx has always been moved by newness and wonder. Her constant reimagining of unexpected ways to compose one’s life has been an endless source of growth and excitement. In both her art and her life, it has been this inherent curiosity that has propelled movement forward. Laurel’s creative expression has taken many forms, and the bridge she found between art and career was graphic design. In her independent practice she designed many collaborative projects in the public realm, with a focus on the environment, historic preservation, and water resources. As an artist, she has participated in frequent group shows, co-founded 22 Wooster Gallery, curated First Look: Ten Young Artists from Today’s Cuba, under the auspices of the Center for Cuban Studies, funded by the Ford Foundation. Her current body of work is an intuitive combination of photography, with a graphic design sensibility of composition and balance. Laurel has had solo shows in Spain and the US, and has been in multiple curated group shows. Her work is in public and private collections in Spain and the US.

BIOGRAPHY – ELENA Elena Yazykova Castillo was born and grew up in Moscow, graduating from Stroganov State University of Arts. Since then, she has been an active participant in major State Russian Art Exhibitions and an author of numerous projects in public spaces, exhibitions and museums, in Russia and abroad. In 1989 in Fondi, Italy, she had her first exhibition of sculpture and, since then, she a has been working as a sculptor, exhibiting in both Russia and Europe, where her work has become internationally known and collected. In 1991, she founded the non-profit art gallery ROZA AZORA in Moscow, in which she is still actively involved as the art director.

Since 1997, she began a new international life beyond Russia. She married the Texan, David Castillo in 1999, and together they moved to Riyadh, KSA, where they lived for many years. It brought real happiness to the artist to find herself immersed in a mysterious, foreign culture, with the opportunity to study the complex traditions of this ancient world from within, and to fall in love with it. Mesopotamia, Byzantium, Egypt, Ancient Arabia, these have forever become part of her reality and her inspiration. The clay that she used for her creations was bought in the homeland of the ancient Sumerians, the very same clay which, according to legend, was used for creating the first human likenesses! Despite the religious ban on images in this traditionalist part of the world, her work was extensively exhibited in the Kingdom and neighbouring countries. She was able to open her own Gallery, the “Private Collection”, which hosted exhibitions of International Contemporary and Antique Art.

1999 was the time when Mallorca was chosen to be common home for the international, traveling family of David and Elena and since 2017, Soller has been their permanent home, where she takes pleasure working in her little studio in back street Soller. Elena Yazykova Castillo’s works can be seen in private and public collections and museums all over the world