The Hidden Valley is not so hidden this week as the eyes of the cycling world, TV and Film crews descend for the Cycle race of the year.  Team Sky and the training teams of cyclists are joined by more competitors as they race around the whole island in daily races.  Sir Bradley Wiggins is amongst the top names and we are in the middle of the Deia to Lluch leg of the race which happens today.  As you read this you’ve still got time to head up to Soller and watch the action as it will arrive here around 12.30.  The race starts in Deia and cycles the most beautiful mountain road of  the world (in my opinion – Amalfi coast road eat your heart out).  The entourage hits Soller and then disappears up the mountain road towards the Monastery of Lluch. Road closures to all but competitors is a feature of this race so avoid the mountain road this morning till they have all gone through.

The cyclists are racing against each other and their own personal best times the same can’t be said for the other race that takes place in Soller this week. The election (or fight) for the privilege of being the main player in the Moors and Christians battle which happens here in May is now on. The main players are Captain Angleats who leads the team of Christians and the leader of the Moors and the Valiant Women.  This is a very important election and brings together the prominent families in this place trying to secure a place for their son or daughter. It has to be said that there is more interest in this election than any political event that takes place here. Every year on the Monday nearest the 11th May this battle takes place and is an integral part of life and the psyche of this place. The elections are public and on the face of it democratic but I wouldn’t like to hazard a guess at what is going on behind the scenes. The sweetest event is always to do with the election of the Valiant Women – who after all were the saviours of this place. Young girls giving an interview to the local paper always say that this is the greatest privilege of their lives to be considered for election as a valiant woman. I just love the rhythms of life here and how these events and traditions are just so important. This is not a spectator sport for visitors and tourists it is an event that really matters to the people of Soller. 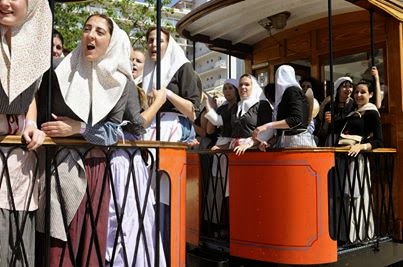 The young people who attend The Institute – Soller’s secondary school are an enterprising lot.  Under the guidance of the tutors they have opened the school restaurant on Thursdays to the paying public.  They have a thriving hotel and catering department in the school and every week they cook a three course lunch and serve it to all who book the 9.50€ experience.  This is under the auspices of ‘Bens Kitchen’ the name of the restaurant  of the school.  Open from 1 pm to 2.15 pm – they would be delighted to see you, serve you delicious food and practise their English.  The Institute is perched above the City of Soller and near the routes to walks to Fornalutx, Biniraix and beyond so it makes a great stop off point if you walking in our mountains on Thursdays.