How big was an English penny or a halfpenny come to that?    I can tell you because someone keeps dropping them on the entrance mat of our house in Soller.  It’s not difficult to identify us in our street half way between Soller City and Port.  We are the eccentric English who decided to live in the heart of a Mallorquin community with few other English speakers around.  Ten years later the people have got used to us and our ways as we have theirs.  We pass the time of day, exchange produce from our gardens, commiserate over illnesses and enjoy local gossip.  But now it seems we have entered a new dimension because there is someone round here with  a cache of  old English coins with significant dates on -such as the Queen’s coronation year ,that they keep leaving at our house.  We get the odd one here and there, they are not delivered en mass and we are not sure what the rules of this game are.  We’ve had pennies and halfpennies,will we get half a crown next? Maybe they are just pennies from heaven from someone who thinks about us and our
previous English life and thinks it is amusing to tease us as to their identity.  We are going to see how many more come and then get them valued – there is surely a charity that could benefit from this largesse.

Rachel Fox our great photographer for this page went off this week to take pictures of the work being done by the Red Cross in Soller.  Apart from the Food Bank, toiletries and clothes they distribute they also work in many other areas in Soller. We were gathering more information on the appeal that they put out this week for drivers.  There are many people in Soller who need to get to Son Llatzer hospital on a regular basis who do not meet the criteria to be picked up by the hospital transport.  The Red Cross asked for volunteers to give up half a day a week to take people to hospital and bring them back after their out patient appointments.  These are people with no families to help them and often without the means of paying for the journey via its four bus circuitous route.  This is a great opportunity for some of our new English speaking Sollerics to get involved with the community by putting their practical skills to good use.   The lack of fluent Catalan is not such an issue when you are driving a car and making small talk.  Rachel was no sooner in the door of the Red Cross with camera in hand when she was given an apron and asked to do the washing up!  The dynamic team that run the food bank and co ordinate other Social Services are an absolute inspiration and will not take no for an answer.  They only allowed her to leave after taking the photographs when she promised to do some laundry on a regular basis for people who can’t.  The skills of the volunteer co-ordinator were much admired – she could probably run ICI in her free time! 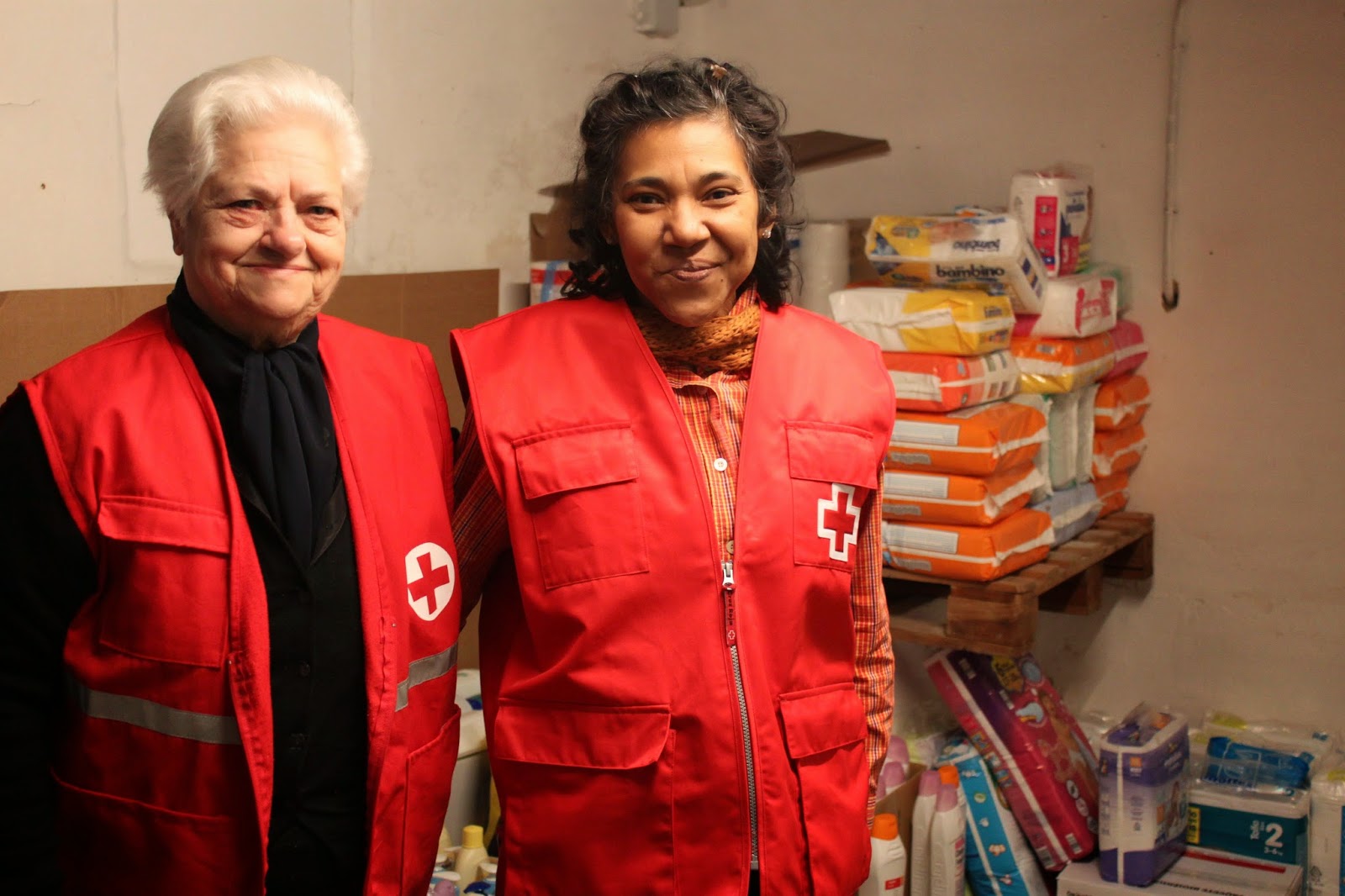 Soller divides up neatly between those who love to live very closely to their neighbours in the narrow traditional streets and those that want the expansiveness of the rural locations.  The latter group are a little nervous this week as there have been a couple of break-ins and the local police have issued warnings to those in isolated areas.  The increase in desperation for some people mean that easy access to a house can be a temptation.  The police have advised these owners that an alarm system that is linked direct to the police station is an option for them.  The response time to these alarms is very speedy owing the the general lack of crime in the area.  The police can be at the scene almost anywhere in the Soller Valley very quickly.  They are advising any Soller resident who is worried about this to go and have a chat  with them about the service they offer.

A policeman’s lot is a strange one if you are appointed to Soller, it is said that the highlight of their week are the car chases up the mountain towards Sa Figera on a Friday and Saturday.  What actually happens is that the police park themselves at the end of the tunnel that leads from Soller to the Port watching out for the transgressions of the tunnel users.  The cheeky boys that like to drive their cars fast often try and overtake the motorcyclists in the tunnel – strictly against the law.  The police give chase and the local boys, who know they are going to get caught, race up the mountain towards Sa Figera and see how far they can get before the police actually catch them.  They end up in court the next morning but have a tale to tell to their friends who are all comparing notes on how far they got before being caught. Fortunately this winter form of entertainment comes to an end when the clocks go forward and Soller is propelled into Spring and other pleasures.  A young man’s fancy then turns to love and seasonal work instead of mountain races.