To arrive in Deya in 1959 at the age of 21 was a waltz into a a world of poets, artists and people giving their lives to hedonism and pleasure.  Jackie left Los Angeles after completing her degree to go on an adventure after a boyfriend had told her of the delights of this Mediterranean Island. A return ticket in her possession and the blessing of her family to go and have fun was all it took to change the course of her life.  Deya at that time was a fishing village nestled in the mountains with a living being earned by the locals either on the land or the sea. Cafe Fonda was the centre of the village and above the bar were a few rooms that were rented to visitors for a dollar a day.  This included three meals a day and was full of those who were glad to have their basic needs attended to while they got on with the finer things in life.  Art, music, discussions and arguments about the mundane and the esoteric were the fabric of life in the Cafe Fonda. 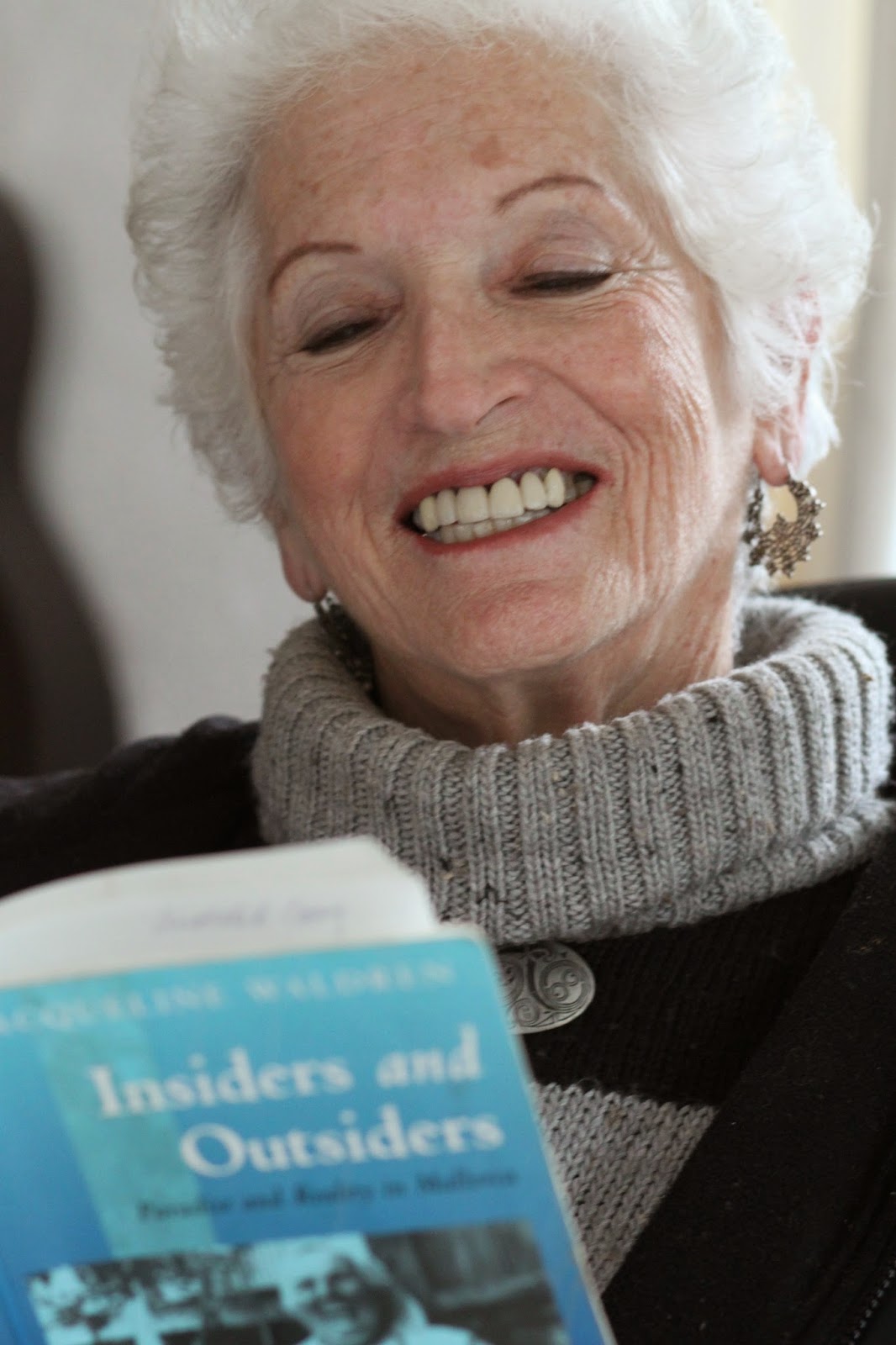 To understand how Deya and many other other European towns and villages came to be full of Americans at the time needs a little look back to what was happening.  Young people from the USA were being funded by the ‘GI Bill’ to pursue their education and it was a unique time to be a poet, artist or a writer  Never before or since has so much opportunity been given to a generation whose country was grateful enough for their war effort to fund education abroad on such a scale.  To the locals of Majorca this influx of people with money being sent to the Post Office every month   to fund their lives was a revolution.  Monthly ‘tabs’ could be set up in shops and bars and a system of bartering until the next check arrived became normal.  The money was not excessive but it did pay for a basic life while the art and music were pursued and in some cases actually sold.

Jackie’s first night in Deya introduced her to Bill Waldren who was also staying at the Cafe Fonda.  Bill was a ‘GI Bill’ Artist living mostly in Paris with summers spent in Deya for the light and beauty of the region.  His days of painting, walking down to the beach for a swim, entertaining his friends at Cafe Fonda and generally putting the world to rights soon became hers and they fell in love.  Bill was 14 years older than Jackie and had a string of relationships and broken hearts to his credit.  He was in her words ‘ the most exciting human being I had ever met’.  A run around Europe followed this two week introduction to his world with a marriage proposal in Paris after three weeks of meeting him Deya.  The family back in California were not happy and Jackie was summoned home to ‘get sensible’.  Who is this man was the question her family wanted answering.

Bill  Waldren at that time was an artist and was developing his technique enough to have sold a number of works.  He was also an Ice Skater and a Figure Skating Professional with the hugely successful Holiday on Ice shows in the USA.  He was a man of many parts with an appetite for life which was overwhelming.  Whatever he was interested in became a passion and he gave himself to it 100%.  Life with this man was never going to be boring, secure or conventional.  He trusted that the universe would sort the practicalities out if he worked hard enough and was true to his passion of the moment. Jackie stepped into his orbit, married and for over forty years shared a life that was an exciting roller coaster that she didn’t want to get off.

Jackie and Bill settled for a life in Deya delighted to be there for the art, music and blessed rural  and coastal life that they enjoyed.  This was an era of no electricity with all cooking done on charcoal amongst a  community who really knew one another.  Four daughters later and Jackie and Bill were at the heart of family life still managing from selling one painting to another and giving art lessons to make a living.  Like many people before them and since they did whatever it took to earn their money in Majorca.  Bill developed his art, sculptures, jewellery collection and at the same time became obsessed by caves.  Investigating the caves of Majorca particularly those around Deya, Soller and Valldemossa led them into a world that was to define the Waldren’s for many years.

The caves for both of them became the development of archaeology based in Deya that spread throughout the world.  A cave in  the Muleta area of Soller gave up the head of the myotragus – a hairy goat – which could be traced back to 3000 BC.  There are many areas of Majorca where treasures and relics of the past have been found.  Many of them found there way back Deya and to the museum which Jackie and Bill created.

What is now the Deya Museum started in 1962 as an old ruin and this was the Waldren home that they created for their family.  A cave like use of space with sympathetic curves and interesting family use for a growing family.  Jackie’s brood grew to incorporate the wider community of Deya and the building also became a Cultural Centre with an art and exhibition centre as part of the fabric.  Censored activities took place there – the local priest was the arbiter of good taste .  Silent films, poetry readings and a host of cultural activities happened around the Waldrens for years.  The ‘Hey Day’ of Deya has been written about with all the famous artists and musicians listed and photographed there but there is no doubt that the person pulling it all together at that time was Jackie and her charismatic husband.

How many women, when asked if they could convert part of their home into a dormitory and share it for twenty years with Archaeological students would have said yes?  Well that’s exactly what Jackie did  – she provided room and board in exchange for work on the Archaeological digs that were  organised from Deya. Bill was finding worldwide acclaim for him work in this field and for them to fill their home with enthusiastic young people to discover and preserve the past was such a pleasure.
The Smithsonian Institute sent students, Earth Watch sent teams and even the Time Team of UK fame sent their TV cameras to be part of a Majorcan dig in the Soller Valley.  With her house filled with her own and other peoples children she created the Deya that she had found with food, hospitality and people living very closely together.  The Earth Mother of Deya was a very apt title for Jackie Waldren.

A knock on the door in Deya one day revealed Desmond Morris of the Naked Ape fame.  He was there seeking out Bill and Jackie to discuss their work that he had been avidly following.  He became a true friend and sharer of their vision of discovering the riches of the Majorcan heritage for a new generation.  He was also Jackie s referee when life took them all off in another direction and fulfilled the Oxford academic side to their lives.  The Museum Lady of Deya was just about to step into another world courtesy of the passion for imparting knowledge that was her husband.  Bill had been invited to lecture in Oxford, his work and reputation had travelled before him and he was resoundingly enthusiastic about the opportunity.   A wife, four daughters, expenses of their Deya life all had to be covered out of a lecturer salary.  The only way that was going to work was if Jackie ran with the idea and made it happen.  Her family were all going together to Oxford and by hook or by crook  she would see test the universe and make sure it happened.  She applied for a job as the Warden of St Clare’s College in Oxford.  Looking after twenty students after doing all she had done in the with her students of Archaeology in Deya  was  no challenge.  Making a one bedroomed  flat into accommodation for six was slightly more of a challenge.   Her own charming persona and the reference of one Desmond Morris brought her and her family happily into Oxford academic life.  Term time in Oxford and long summer vacations back in their home in Deya became the next phase of Waldren life.

Jackie is a highly intelligent, articulate woman and the opportunities that Oxford gave her allowed her mind to develop.  A masters degree in Anthropology with a PHD in the’The truth of Deya’ is amongst the many published works of this inspiring lady.  She has studied and written about her local friends in ‘Getting to know the Majorcans’.  Her published book ‘Insiders and Outsiders’ makes fascinating reading for those of us who have chosen to live here and develop relationships with our neighbours.  It won’t surprise you to learn that during the Oxford years Jackie became a lecturer in her own right and ‘The Museum Lady of Deya’ has had a glittering career in whatever field she has chosen to pursue.

These days life is busy based back in Deya surrounded by her children and their children.  Bill died ten years ago and Jackie and her daughters are still running the museum and using the cave house as a cultural centre and exhibition space.  The Deya Museum has just celebrated its 50th birthday and is full of the relics of Majorca and the input of the Waldren family.  Jackie is a fount of information about her beloved Majorca and about many other subjects.  Her brain is on a hundred mile an hour journey at all times.  Jackie Waldrens life story should be written – I have only touched on it here and I have run out of space.  This is a lady who embraced love and let it take her into a world of family life and intellectual challenge.  She has touched so many lives along the way and is revered by so many.  To her girls she is their special mother but for many people in Deya she is simply the Earth Mother of the place.