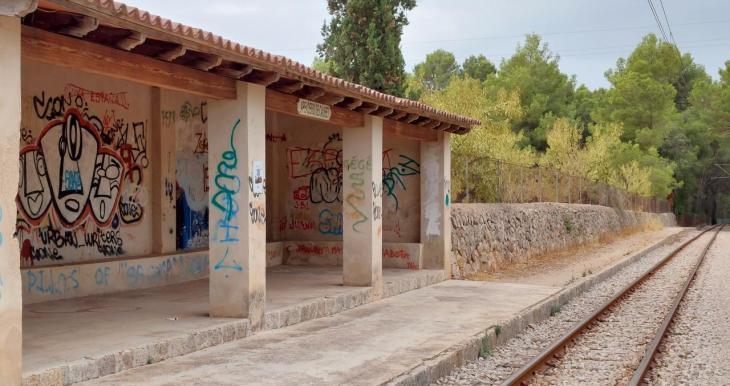 By Shirley Roberts with reference to Diario de Mallorca

The Joan March hospital is the building in the high distance seen from the Soller Road. It is often called ‘Caubet’ by locals which is the name of the estate where it was built. Caubet was the small village and the hamlet which housed the chapel, the school and the workers’ housing many of these are preserved to this day.

This hospital, was a gift from Juan March to the then government, of Primo de Rivera. The first stone was laid in 1928, but the works were not finished until many years later and it was finally inaugurated in 1945. Years before, in 1938, Juan March’s son had donated the building to the National Anti-Tuberculosis Board. He dedicated himself to the care of tuberculosis patients for decades. Today, going up to the old sanatorium provides a sense of peace, so it is not difficult to imagine the tranquillity that the sick must have had. The poet and novelist Blai Bonet was one of his patients and his stay in Caubet marked him in such a way that it was later reflected in his work El mar, adapted for the cinema by Agustí Villaronga.

The Daughters of Charity took care of them and in the 1960s there were many artists who, taking advantage of their visit to the island to perform, came to the sanatorium to bring joy to the patients.

In September 1969, the writer Bartolomé Suau dedicated his Mallorca page to the sanatorium, as a call for the repair of the road that led to Caubet. “It is less than two kilometres long and it has become a ravine. He said ‘we have become spokespersons for the prayers of health workers, patients, relatives and caregivers of the Sanatorium to find the money to fix that road. It would be a work of true charity.’

At the end of the 1990s, the hospital was converted into a social health and palliative care centre. In recent years, it added to its services the alcoholism treatment unit and the rehabilitation unit, in addition to providing care for respiratory problems.

The Soller train played a huge  part in taking staff to and from work and a station was built called ‘Apeaderode Caubet’.  The waiting room exists to this day and apart from the graffiti is used as a viewing place for walkers of the area.  They sit and watch the trains go by and rest their feet for a while.

Imagine if you will the opening of the hospital in 1948 with its employment opportunities for the people of the Soller Valley.  How would they get there and back each day over the Coll Mountain?  No tunnel in those days and buses were rare.  It was the train which jumped into the breach and built a stop designed for staff and visitors from Palma in one direction and Soller in the other.

This was a very important stop and this service carried on for years.  Today it is the resting place for walkers and graffiti artists.

The hills and mountains of our area give up their stories and I am so happy that I can ‘catch’ them for your interest.