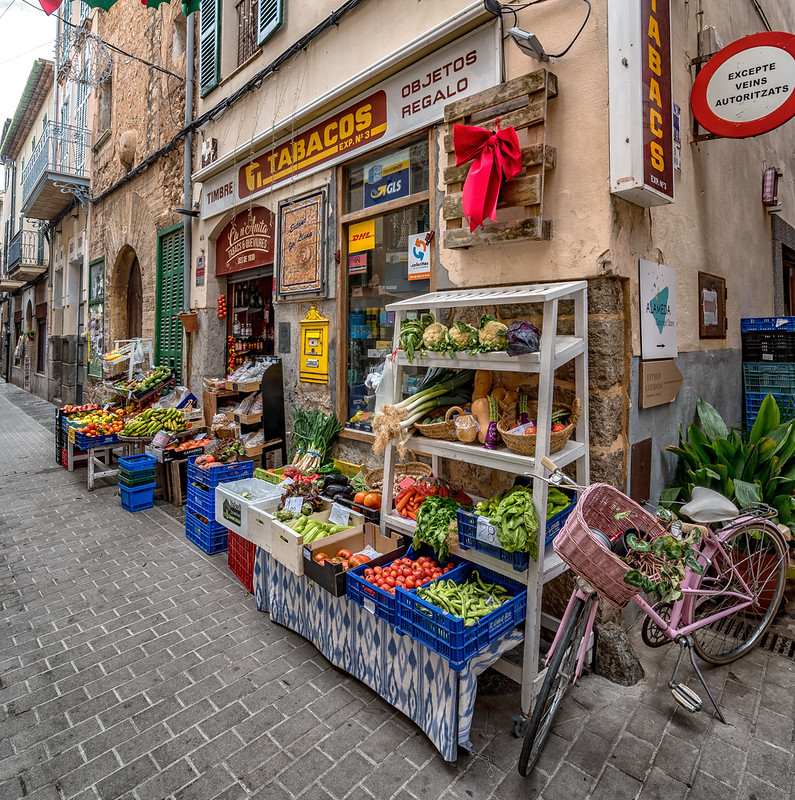 By Shirley Roberts on 17th September 2022

A market is a market is a market except when it a Mallorquin market.  At heart they are for local people to see and be seen and to conduct weekly business.  Mobile phones and computers on the go are a feature of life here as everywhere else but it is not the whole story.  The decision making amongst those who make the decisions happens on Saturday in the Soller Market and on Sunday in the larger Santa Maria market, which sweeps up the Soller Valley and the surrounding towns.

Add to this the decision times of the two major fiestas of our world at Firo in May and St Bartholomew in August.  Then there are the important people who return for Christmas and New Year celebrations and that is the map of the core of decision making life in Soller and the Valley.  Local elections elect those who govern us but they are influenced by those offering an opinion.  Houses and businesses are still owned by French people with a huge history here.  It is said that 70% of Sollerics have French in their recent DNA.  Those who returned after making a fortune in the Americas are also represented in houses and families here.  The influences of the past are very much part of today’s decisions.

It was to this world the markets belonged as the weekly gatherings on Saturday and Sunday market places continued the political discussions and decisions.  The Fiestas brought in the important outsiders and  Market Days were very significant in the process.

The visitors to our world see the Markets as shopping opportunities, and so they are. Locals also watch out for who is talking to who, and second guess what is brewing.

Soller is situated in the plains of the valley, surrounded on three sides by the majesty of the Tramuntana mountain range. The area is known as ‘The Island within an Island’ as it protected its insularity over the years.  Behind the mountain a vibrant, French influenced community which in the past thrived on factory life, music, poetry and citrus growing. Those days have moved on but the ‘Island within an Island’ mentality is still here.

The outside world visits us every Saturday and the market is in full swing from 8 am in the centre of Soller. The market stalls start from the covered market hall and wind their way up side streets and alongside the main square. La Lluna’s shops lay tables in the street and the market theme is everywhere. Arrive in Soller by train on a Saturday morning and you will not miss the stalls selling jewellery, clothes, toys, sweets and local handicrafts. The stalls selling hams and sobrasada are very inviting and you can taste before you buy. The ‘must have’ straw baskets with leather handles are usually alongside the hams and no self-respecting Solleric goes to the beach without their ‘market bought’ basket carrying towels and sun cream.

The market is a very important social occasion where business is done and meetings take place which oil the wheels and create new businesses for the community.

On Sundays the focus shifts to Santa Maria where a huge market takes place from early until about 2 pm. Soller’s market caters for the locals and tourists, Santa Maria is the market town of the north-west of the island and as such it encompasses the people and the produce of the area. You will find many Solleric who regard this market as the most important one they cannot miss each week. Everything is sold here including wonderful fresh fruit and vegetables from all the surrounding farms. Parking takes time but there are large car parks on the three sides of the town and walking to the market square is not far. There are a number of local cafes to sit and watch market ‘Santa Maria’ style happen.

Chatter, gossip and planning is what is going on in our markets. Local politicians talk the talk and ‘glad hand’ on their market trips.  They know the significance of the local mood. Markets here are all things to all people.  To shop, to meet friends, share a coffee, greet visitors, is at the heart of one level of the market.  On another level it is as if you are treading the inside of a very political building where matters of serious local interest are being discussed and planned.

Local markets are just not  what they seem on the surface…