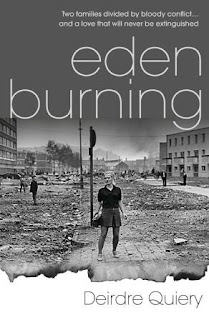 Deirdre Quiery is a testament to education, good teachers and a thirst for knowledge that enabled her to survive appalling sectarian times.  Deirdre was a child of the troubles in Belfast and was educated in Our Lady of Mercy School in between 1968 / 1975.  This was a catholic school situated in a protestant area.  Prior to 1969 her family lived a normal life in Northern Ireland with loving parents who worked and supported the family.  They owned their own house in North Belfast and were proud of their little palace.  They bought the best furniture they could afford and decorated the house from top to bottom every two years as was the norm for the aspirational working people of the time. Her parents worked diligently on the house and garden and were delighted with their home for their three growing girls. As a catholic family they regularly attended church and were often the early birds at the 7 am masses. The comfortable little house had a coal fire burning in the bedroom and the sitting room and they were a normal happy family. The nightmare for the family began in 1969 when the hushed voices of the adults in the house gave way to real fear that spread to the children.  The rumours were that machine gun posts were being set up all over the Ardoyne district and that Catholics could no longer sleep easy in their beds in this area of the city.
The British soldiers arrived in the summer of 1969 and everyone breathed a big sigh of relief. Deirdre remembers going to a 7 am mass in the Holy Cross Church and stepping over sleeping soldiers who were resting after the shoot outs of the night before on the Crumlin Road. It was an odd sight to see the sleeping soldiers with their guns beside them in the middle of the path to church. For two years this uneasy state of affairs ruled their lives but the talk was growing more fearful as ethnic and sectarian cleansing was next on the agenda for these people.  An accident of birth or fate had determined where they lived and this was now going to be in the hands of others.
In 1971 the ‘cleansing’ began with the visit of a gang of armed rioters who walked up the street they lived, shot through the windows of their house and told them they had 24 hours to leave or they would be shot.  Overnight their safe world collapsed never to return for the rest of the childhood of the girls.  The next morning, like the refugees fleeing war torn areas of the world today they left with their possessions hastily thrown into a suitcase. They also took their radio and the cat and headed off for the clearing station which was housed in a local school. Catholics and protestants were being forced to leave mixed areas and relocate to their own ghetto. They slept on the floor of the school where blankets appeared from nowhere and an impromptu barbeque was lit to feed the people. There were catholic scouts out in the streets looking for vacated properties for the displaced families and Deirdre’s family were given one of them. They were moved to a squat in the Crumlin Road on the ‘peace’ line. They took over the house of a Doctor and his family who had to leave in a hurry just like them. The Crumlin Road was the duelling point for both sides to fight and they now lived in a war zone. Deirdre’s father covered the front windows with chicken wire and put a bar on the door to give an extra couple of minutes for them to run out of the back if they were attacked at the door. In their time there the house was taken over by the IRA and they were taken hostage in a bedroom.  One cousin was killed in the crossfire of that attack and two uncles were murdered.   One uncle died trying to save his on.  His last words were ‘God save you son’.  The son survived.

The Crumlin Road was now how for the family and it was a world apart from where they had previously lived.  The children were escorted to and from school each day by soldiers.  When they arrived home the bolts went on the door and no one came in or out.  No freedom to play in the garden or in the street just life behind bars on the Crumlin Road. Every day there was rioting, shooting, petrol bombs and atrocities. The effects on this little family were enormous in every respect. Mum and Dad argued and were very unhappy.  The house was a basic shell with no carpet on the floor and none of the home comforts of their previous life.  The days of pretty wallpaper and the fresh smell of a newly painted room was gone for ever.
Deirdre and her sisters zoned out into a world of books and learning and studied till their heads nearly burst with the effort.  Everyone in that house could see that education, learning and application was the only way out of the horror story they lived in. Deirdre’s much loved parents were in a dispossessed world of their own with little hope that education was going to save them.  They were so far out of their comfort zone that they turned to their children for advice on how to live through it all.

The girls all found salvation from school success and university education.  Deirdre went to Leeds for her degree and freedom from the terrors of the Crumlin Road. For eight years she lived and returned there in holidays until she was ready to move into the high flying corporate world that claimed her and took her all over the globe.
Fast forward to the Soller Valley where Deirdre and husband Martin have lived for the past 12 years. The peace of their rural home is a far cry from the Crumlin Road and it is their sanctuary.  This is the place that allows their creativity to flourish and their courses in Mindfulness and Meditation to exist. These days Deirdre is an International Executive Coach working with senior business leaders. Her brief is to stretch team performances to exceptional levels, including clarifying vision, values and strategic priorities. She has to leave the Soller Valley and fly round the world with this work but increasingly schedules more and more time back here to write and be at peace with nature.
Last year her book Eden Burning was published which is a fictional account of life on the Crumlin road in the 1970’s.  It is a work of fiction that digs deep into the facts that she lived with.  The reactions to the story contained in it has been amazing.  So many of us know about the years of troubles in Northern Ireland without truly understanding what day to day life was like for ordinary people and their children. The sad realities resonate with so many dispossessed children living in sectarian ghettos today.
Deirdre Quiery is a very interesting Solleric who remains cheerful, upbeat and forgiving of her past.  She has many tales to tell some of which have got into the pages of Eden Burning and more are to come in the next book due to finish very soon.
The Soller Valley is her place in the universe these days but she has much to say and observe about the years she has lived through. Watch out for her second book – a fiction based in Mallorca – due out soon.