Loading...
Skip to content
The Tunnels of the Soller Valley
Written by Shirley Roberts
Photographs by Rachel Fox
Published in the Majorca Daily Bulletin
on Tuesday 28th February 2017 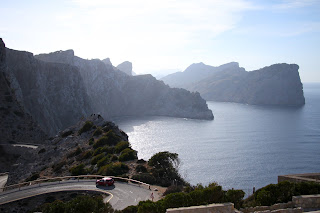 To live on the craggy coast of North West Mallorca is like existing in a secret garden of myths, stories and legends.  It is no secret to say that pirates did a roaring trade in these parts over the centuries and that some people alive today played their part.  In the years of deprivation when the Port of Soller was a Military Base life was tough for Sollerics. A pirate trade grew up to smuggle essential foodstuffs and medicines, particularly penicillin. The caves that are visited by boat trips today are testament to the caves leading to tunnels in the mountains and to tracks into the Port.  The smugglers stories are many and some of them have grown wings and will remain as part of the folklore of the Port of Soller for ever. 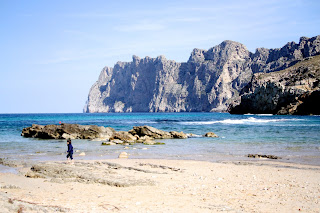 The tunnels that exist in the fishermen’s end of the Port of Soller are an altogether different matter.  They were created in the Military past and over the years’ entrepreneurs have sought to bring them out of the darkness into a commercial light.  The story was that daily sailings from France were once again going to arrive in the Port of Soller.  The lorries would be unloaded and sent on their way through the tunnels to the main Soller tunnel and then on to Palma.  A commercial and a passenger route was envisaged and certain infrastructure projects had to be completed before all this could begin. 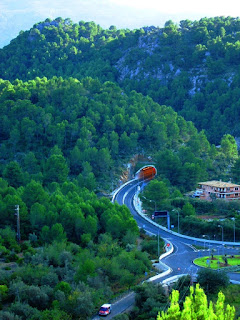 Ten years ago on 24th February 2007 the Sa Mola tunnel linking Soller Port to the main road to the City or straight on to the tunnel was opened.  This project seemed out of scale for a link route between city and beach and everyone at the time thought it was for the lorries that would arrive on these daily sailings. So far that has not happened and the Port of Soller has continued its beautification into a high end beach resort with a twist. The combination of a regular fishing fleet, mooring for high end yachts and all eyes being on the last piece of remaining land around the water that can be used for building is irresistible. The business people are here again and ready to build an expensive shopping and events area. Then, this week, out of nowhere the daily sailing stories have come out of the woodwork. It is now being said that the key to this becoming a reality was always going to be when the tunnel was free to all.
As a story teller myself I can spot a yarn so I am not convinced of this saga but it will amuse us between now and the time the Soller tunnel eventually becomes free.
It is the time of mayhem, madness and cross dressing and that occupied our Soller Valley weekend. Carnival is big business here and the people take the notion of playing with the alter egos seriously before becoming reflective again towards Easter.  The children’s carnival was sweet but speedy last Friday because of the downpour.  The Children’s entertainer was doing sterling work in the rain getting all the children on the Town Hall steps to dance but in the end we all went home.  The sun shone beautifully on the adult’s carnival on Saturday in the Port of Soller.  The rumba beat had us swaying behind the Sollerics in their great costumes all looking for a slice of the 3000 euro prize money.  The crowds came in their thousands and all the cafes and restaurants were open to welcome them.  The Port of Soller is fully open now and was celebrating the carnival together with the arrival of the 2017 season.
This week our direction turns towards Ash Wednesday which is also Balearic Day on 1stMarch.  This is a Bank Holiday and Soller is full of extra visitors for this week as families take an opportunity to travel for this mid week holiday. Some of them will take the opportunity to join the special Ash Wednesday Mass and Procession in Sóller. The faithful will gather at 7.00 p.m. at L’Esglèsia de l’Hospici on Carrer Hospici just off Sa Lluna.  Following a series of prayers, they will process from the Church following a particular crucifix kept in that Church,’The Image of the Blood’.  The group will then process into the main square and into the Church of Sant Bartomeu, where the Ash Wednesday Mass will begin at 7.30 p.m.  This will naturally include the distribution of ashes.  Everyone is most welcome to attend.