The Kings and Charity in Soller
Published in the Majorca Daily Bulletin
Tuesday 5th January 2016
Photographs by Rachel Fox
The arrival of the Kings in the Soller Valley this afternoon kicks of the true meaning of the season in the Soller Valley.  The Kings will arrive by sea to the Port of Soller this afternoon at 4 pm and assisted by their pages will distribute sweets to all.  They will sit in splendour on their thrones at the harbour and talk to the children about how good they have been this year and what their requests are for presents. This procession ends in the local church in the Port before the Kings get on their festive Tram for the next part of the journey. 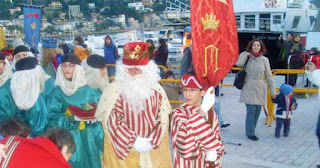 Awaiting the Kings arrival in Soller hundreds of children will be assembling on their floats.  There is intense (friendly) rivalry between the schools and the costumes and float designs are a closely guarded secret.  They all want to win the accolade for the best School Float of the Year. The parade assembles in the Market Place and consists of Kings on horses, school floats, the occasional donkey and many random individuals marching behind the Soller Band who are giving it their musical all.  The procession then wends its way round the City centre with the children throwing sweets from their moving floats and waving to all their family and friends who will turn out in their hundreds to support them. This is a great occasion in the Soller calendar and is very special to the children who know that the kings on their camels will visit their houses tonight to eat the goodies left out for them and leave the presents. 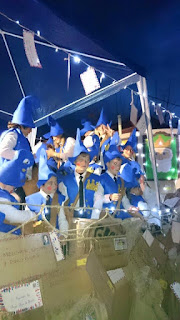 The elongated Christmas and New Year celebrations are a very busy time for the workers of the Red Cross in Soller.  All the events and special dates in the calendar cost money that many families in Soller simply do not have.  At the last count there were said to be 400 families in the Soller Valley who are off the radar for government assistance. This group of people depend on the charitable support of the Red Cross and the Social Services of the City of Soller.  At Christmas, collections and events take place to raise money for this work.   Toy donations are very important and the Red Cross are on a mission to make sure that all the children in our area receive a gift from the Kings.
The people of the Soller Valley are very kind and do look out for each other.   The Church is at the heart of the community and they also do magnificent work in supporting those who have little. It is when you think that 400 families actually mean around 1000 people that the scale of the issue becomes clearer.  In a total community of 15,000 to have 1000 dependant on charity is a salutary thought.  Majorca is an island of plenty but the distribution of wealth still means there are children who go to bed hungry. 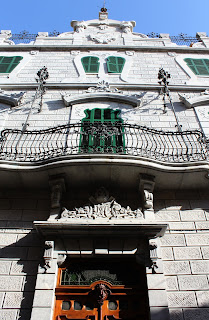 Can Prunera, the Museum of Modern Art in the Lluna, in the heart of Soller is the collection point for donations.   For the month leading up to the Three Kings celebrations its doors are open to receive bulky donations of toiletries.  The food bank here is well supported and consistently donated to.  The fact that people who have no money still have to wash, use toilet paper and clean their houses sometimes gets forgotten. This programme encourages donations of soap powder, bleach, washing up liquid, nappies, sanitary towels, toilet rolls, incontinence pads and anything else you use in your home.  There is a huge need for these donations and nothing is wasted. 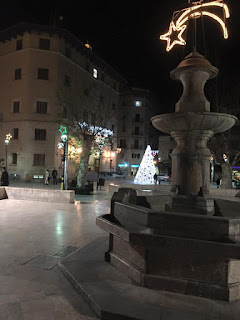 While we talk about solutions to problems to enable people to work the day to day life of those affected still has to go on.  Sometimes it takes a community to feed and nurture its children and I am proud that mine does just that with your help.
The children gathered last Saturday in the Church in the Port of Soller to listen to the Soller Band play all their favourite music.  They took us all on a journey through the instruments and it was a magic Christmas moment.  The specially decorated tram then took the children up to Soller to give their letters to the Pages who represented the Kings.  A queue of expectant children clutched their notes and made their requests. Everyone was smiling as the children received their sweets and were listened to by the Kings representatives.  How many parents left that meeting with a heavy heart I don’t know but thanks to the good work of all the charitable workers in the Soller Valley some help will have been given.

2016 is a new blank page and I join with you in hoping that many of the extreme issues that take families to the edge can be helped.  In the meantime, thank you for your interest and donations.