Published in the Majorca Daily Bulletin – 13th May 2014

The organisation of the Soller Firo has to be seen to be believed.  This is the major event of the year for Sollerics and the well oiled machine runs all year round preparing for these special dates in the calendar.  It was all change for this year as the organisers wanted to get far more organisation into proceedings.  Wristbands were issued to all registered participants and the inscription procedure was arduous.  In the end over 2300 people registered to join the battle and they paid for the privilege.  The Soller police prepared for a total of 8000 people to be allowed into the central square for the final stand off.  Special permission was granted by the Balearic Government to let off a total of 12,000 blank cartridges for the fighting and many extra trams were brought into use.  The footsore pirates had a lift up from the beach to the city on production of their wristbands.  I am not sure what the original pirates would have thought about that but that’s the reality of the battle in 2014. The photographers of the parish had a field day with all the photo opportunities and every minute of the fighting on the beach to the triumph of good over evil was covered by TV cameras and Facebook.  All over now for another year except its the post-mortem now.  Did all the extra security and organisation work?  Did the ban on alcohol till after the battle make a difference?  The results will soon be published and the planning will start for 2015.  All  agreed that this year will take some beating and a splendid  battle was had by all.  The Christians won again and the Valiant women saved the day. 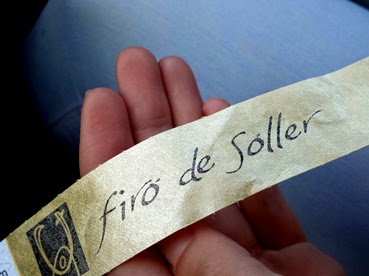 A house move for me into the centre of the City of Soller left me without the internet and a dead computer for 48 hours.  I became one of the users of the local Internet Café and joined their fascinating world for a brief snapshot of time.  The census for Soller lists  many nationalities that live in this City and the villages of L’horta, Biniaraix and Fornalutx.  The internet Café on a Sunday afternoon is to see the reality of that fact.  I was there typing away on as many people from different countries called in to make their weekly calls home.  There were Cubans, Colombians, Nigerians, Americans, Bolivians, Puerto Ricans and others that I couldn’t identify.  It was a regular event for these people who greeted one another and showed pictures on Facebook of their children and relations.  I was briefly included in their world and learnt about the jobs they did here in Majorca which enabled them to send money home.  There were phone calls with tears and many more of just catching up with the news of the week.  So many people live here so far away from home with all that means.  The melting pot of Majorca means that this is a scene that is replicated in internet cafés all over Majorca every week.  I found it very moving and the image of the rainbow nation spending their Sunday afternoons phoning home will linger in my brain for some time to come.

The Lluna – the main shopping street of Soller is changing before our eyes.  It is becoming just so chic with new openings that would not be out of place in trendy parts of London.  The local shops such as butchers , grocers, chemists and greengrocers are still there thankfully and they seem to co exist alongside the high end tourist shops that come in to fill every empty shop front.  The latest shop that has announced a ‘Liquidation’ sale is the local drapers/underwear shop.  This shop has been there and looked exactly the same for the last 38 years.  The dresses, nighties and bits and pieces represented a certain age and stage in a Soller woman’s life.  It has been run by a persistent saleslady who manages to convince you that what you really really want is contained in her shop!
She makes me laugh and I will miss her eccentricities in the changing face of the Lluna.  In the meantime bargains are there for all while she makes a speedy exit into retirement.  The jungle drums are already beating for that shop is a prime site corner position.  Watch this space – that shop will not be unoccupied for long – the lease has probably already been signed.

So this week in Soller the Moors and Christians have battled it out again.  The many nationalities that make up our community have called home and have the bitter sweet memories to keep them going till next Sunday.  The retirement of the best underwear seller in Soller has been met with ‘I don’t believe it’ by the wider community.  A little snapshot of our lives here in the Soller Valley to keep you going till next week.

More stories and daily updates can be found on www.sollerweb.com