Published in the Majorca Daily Bulletin – Tuesday 6th May 2014

There is something about the Firo that concentrates the  mind of the local politicians.  They know that Soller will receive thousands of extra visitors for the two weeks that encompass Monday 12th May when the battle kicks off.  Some of these people will be visitors coming to see what all the fuss is about but a significant number are the ‘returners’.  These are people who own homes here or have familial connections who always return to Soller at this time of year. Some of them live half the year here, others are looking after their property here until their retirement when they will return full time.  In any case the Adjuntement of Soller know that all eyes are on them and what they have achieved since the last Firo.  The politicians are also in re election mode as the elections are coming up in the next twelve months.  This combination of events is very good for Soller because outstanding jobs are being cleared at the fastest rate possible.

The site of the Hotel Rocamar is a case in point and the diggers arrived yesterday.  Not to demolish the hotel I’m afraid but to clear the debris all around it.  Dereliction attracts dereliction and that has been what has happened this winter.  Fly tipping of rubbish has taken place and the site has become a monumental eyesore.  This area is the start for so many of the mountain walks around Soller and we were all ashamed that visitors and walkers had to see this mess.  The complaints from the Soller Hotel Association and many others provoked the response we are delighted with and the rubbish is being taken away and the site tidied up for the season. The future for the site is very beautiful as there are fine plans to landscape it and make it wonderful – once the hotel is demolished.  I have reported for the past five years on the due date for the demolition and always at the eleventh hour there is a problem that stops it happening.  There is obviously a much bigger story going on behind the scenes than I am aware of. Maybe this year -just before the council elections – it will happen.

In the centre of Soller there is a lovely local neighbourhood of the Estiradors.  In the heart of the place there is a small swing park and the area for local barbecues and fiestas.  Soller people have asked for years that the area be fenced as it is just so dangerous for little children playing so close to the road.  This has been a huge issue for the area and the minutes of the meetings of the Estiradors Community Association prove how many times the Adjuntement have been lobbied on this matter.  This week the Soller Mayor posed for a photograph alongside the completed work.  A fine fence is now in place and the area is now safer for the children and looks very smart. The community is grateful but can’t quite work out why this very reasonable and obvious solution to this problem has taken over ten years to complete. 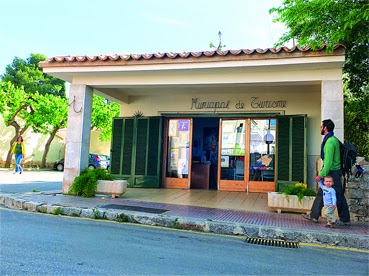 The Mayor has been very busy this week, no sooner as one photo opportunity was over it was time for another.  This time with the Balearic Minister of Health who was signing over the Port of Soller Health Centre to the Education Department of Soller.  This is a very significant story for the families in the Port of Soller who have been working towards this end as long as the Estiradors neighbourhood had been working for their solution.  The heart of the matter is the Pere Cerda School which is the only public school in the Port of Soller.  It currently caters for children from the ages of 3 till 8.  It is a one form entry school and they function beautifully as the caring school at the heart of the community.  Unfortunately for local parents when the children get to 8 they have no choice but to move to other schools in Soller before changing again for secondary education which starts at age 12.  The desire has been to enlarge the school to enable it to be a school catering for 3 years to 12 years. This was all thought possible because the building next door to the school is owned by the Department of Health and currently houses the small Health Centre of the Port.

The lobbying, meetings, challenges have gone on for years about this issue but finally resolution has happened this week.  The Health Centre will be re housed in the (due to be enlarged) Tourist Information Office.  The Tourist Information Office will move to the Pier in the Port of Soller near where the tourist boats leave from. The school will expand into the vacated Health Authority building next door which will enable new classrooms and general expansion all round.  The growth of this school so that it become a full infant and primary school is almost assured.  I say almost because the future depends on the families committing themselves to the growth of the school and keeping their children there when it has been traditional for them to move at 8 years.  It is all very exciting and the families that are involved in this situation (mine included) are very happy with this outcome.

So the Mayor and the politicians have had a good week, lots of plans have come to fruition and they can hold their heads high as they greet all the visitors and returners for Fiesta.  Well done Team Soller …