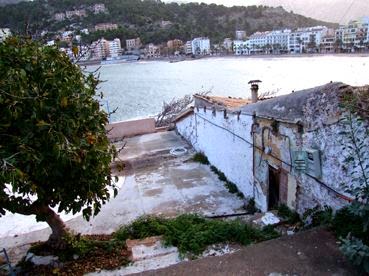 THE QUARANTINE HOUSE IS FOR SALEThis picture shows the space which was once occupied by the QUARANTINE HOUSE of Soller. In time gone by sailors spent 40 days here before being allowed to roam the rest of Mallorca. They had to be certified as free of disease before being allowed to go on their way. There were many of these places (also known as the Lazarets) built around the coastline of Mallorca.

The Soller version in its time became a bar and fun area on the beach that locals still remember fondly. These days the City of Soller have tried to make it part of the Museum of the Sea to commemorate its significance here. But, alas there is no money for this project and the City could do with some cash. So the decision is to sell this rare seafront location to the highest bidder.

Form an orderly queue if you are interested and contact the Adjuntement of Soller with your money and your plans for the location.

We will watch developments with great interest here.