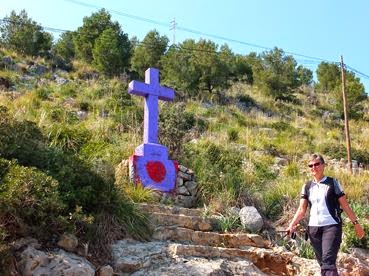 The story behind the PURPLE CROSS

A regular walk for Sollerics is the wonderful uphill cliff walk to the Lighthouse from the Repic Beach. As you climb higher and higher you happen by a simple cross – a memorial of the past. Except that this is no ordinary memorial and still makes some people in Soller very cross.

The story of the FALANGIST who was shot while trying to blow up the radar station that used to exist in the Muleta -near the Light house is very interesting and was shared with me by Andrew Rawson of www.mallorcadaysout.com.

In Soller’s military days in the 1930’s the special installations around Soller were targets and none more special than the Radar Station that existed where the Muleta Youth Hostel exists today. There were patrols and intelligence that was gathered on the movements of those likely to cause problems. The word came one day of a plot to attack the radar station and troops were dispatched and told to shoot to stop this happening.

Following orders the shot rang out across the Port and the death recorded of the member of the Falangist Party who was stopped in his tracks before achieving his goal.

Politics were very complicated in those days and although the Soller soldier was following orders he was arrested and eventually shot himself for carrying out this order.

The memorial to the Falangist soldier still offends today and is the reason it is often disrespected. Painting it purple has been the latest in a long line of abuse of this memorial. The City Fathers of Soller often discuss what to do with this cross and there are those that think it should be demolished.

This event took place just over 50 years ago – it is current history to so many Sollerics. I wonder how this will be resolved