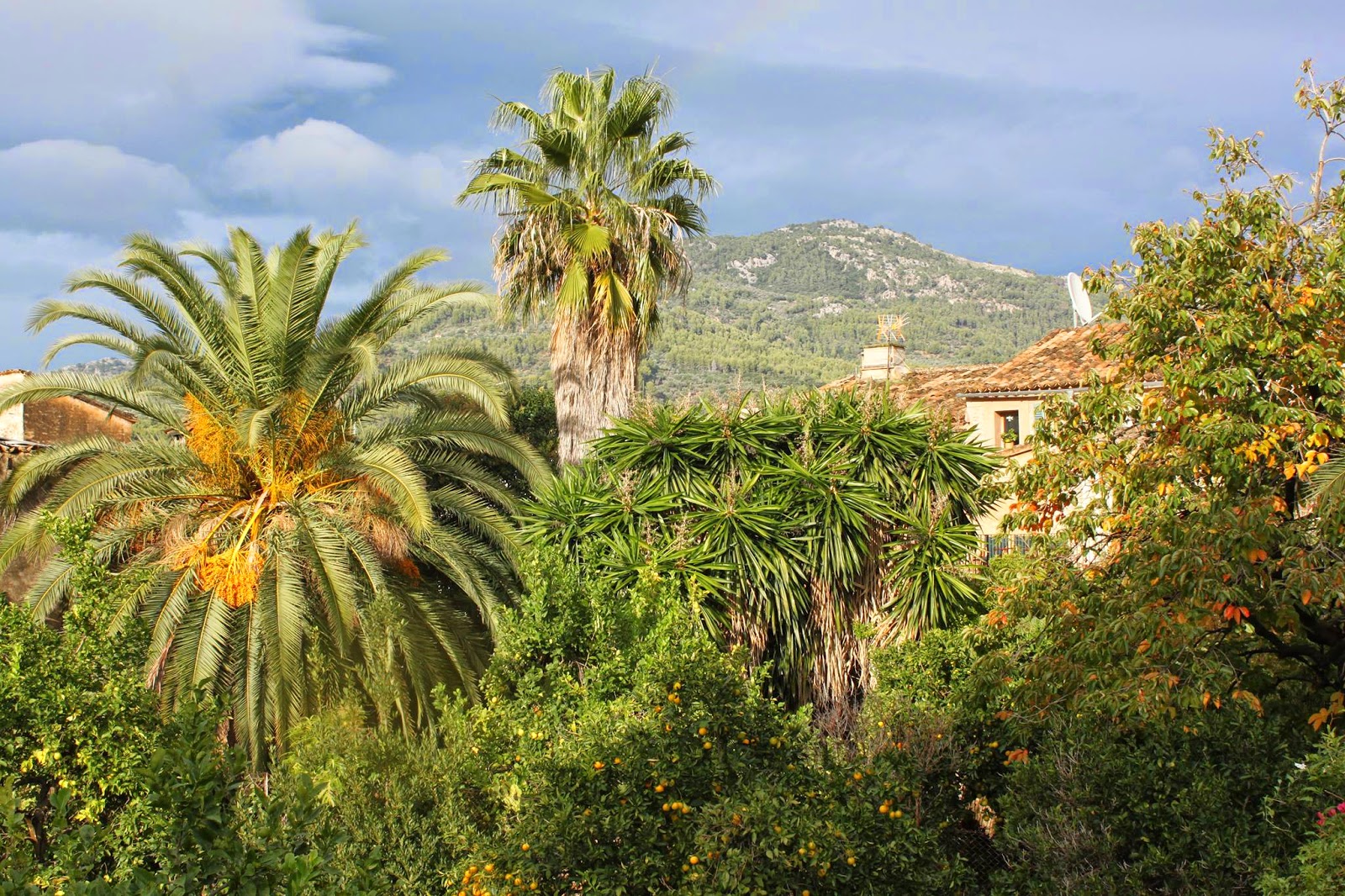 Valley View photograph by RACHEL FOX
I have been having fun with words this week and it all started with a visit to a special lady in Deya who is the subject of a future interview for this paper. We were discussing the ‘Hey Day’ of Deya and talking of ‘back in the day’ of Soller before the tunnel opened it up to the world. Every generation has its ‘hey days’ and it pleases me to think we are developing ours for our time and generation. Soller is in the midst of the Estate Agents last rush before Christmas and as one of the many people with a house on the market here I have seen a few of the current crop of potential buyers. They are enthusiastically discovering Soller for themselves in 2013 without the history or stories of back in the day when life was different. They are embracing what they see now and deciding that this is what they want to be part of. They are interested enough in my plans for downsizing and moving to a purpose built flat round the corner which opens up my house for sale. They smile politely at the story but their minds are already away with the beauty and wonder all around. The sea at the bottom of the road and the 360 degree view of the mountains from the windows has captivated them and it is the dream of 2013 and beyond that is carrying them forward.

Part of my mission in promoting all that we do in Soller is to update the ‘Soller Shirley’ blog on Face book a number of times a day. This medium tells stories and shows pictures of what we are doing here and how our lives develop. As you might expect a number of people comment on the blog, send messages and ask questions. One of the most poignant ones recently was
from a summer visitor who uses the blog to keep in touch with Soller in his absence. He said ‘I am jealous of your perfect lives. I would love to live in Soller’. The responsibility for representing a ‘perfect life’ weighs very heavily on all good bloggers because all we can do is tell our version of the truth and then it is down to others to work out if it would work for them. All I know is that right now there are plenty of people who have decided that in 2014 they will live either full or part time in the Soller Valley and the Estate Agents will be recording another bumper year.

On Saturday 23rd November in-between the sunshine and showers of a winter Soller Saturday market there was solidarity meeting for victims of domestic violence. November 25th 2013 is the International Day Against Violence and the people of Soller wanted to show their allegiance with this cause. The Maria Mayol Colum Foundation for the Solidarity of Women were the organisers of today’s demonstration and are the inspiration for the defence of women’s issues in Soller. Maria Mayol is one of Soller’s famous daughters and at the turn of the century formed the highly influential ‘Promotion of cultural Development of Soller Women’ organisation. The group share Soller’s museum and more can be learned of her there. She was made ‘An illustrious child of the city of Soller’ in 1992 some thirty three years after her death. Her work in developing women’s rights to read, write and be free from domestic violence was not popular at the time. These days she is considered a heroine and the people of Soller are proud of her stand and all that she inspired within the City. As the group stood in the centre of the square in front of the church making their point for the abused, normal life went on around them. It was to be hoped that some heard and spared a thought for the horrific numbers of victims of domestic violence there are said to be in Spain.

The statistics that were released today regarding the number of families needing food aid this winter in the Balearic’s make frightening reading. It is said that 25% of all households need help with basic food stuffs, medicine and fuel. There are fifteen local charities in Majorca who are working with families to make sure that children are fed. Another two food banks are being opened in Palma to receive donations and distribute food in the next month.

We do live in a wonderful place and our quality of life maybe the envy of many but we are not without our problems. Soller people like the rest of the people in Majorca are generous and anxious to help those in distress from whatever cause that comes. It is good that the solidarity days and the reminders of the needs of others are regularly found here so that we can return something to the community we enjoy living amongst. Giving back is as important as taking and this is what the 2014 newcomers to the Soller Valley will soon learn if they truly want to become one of us and join our Solleric lives.