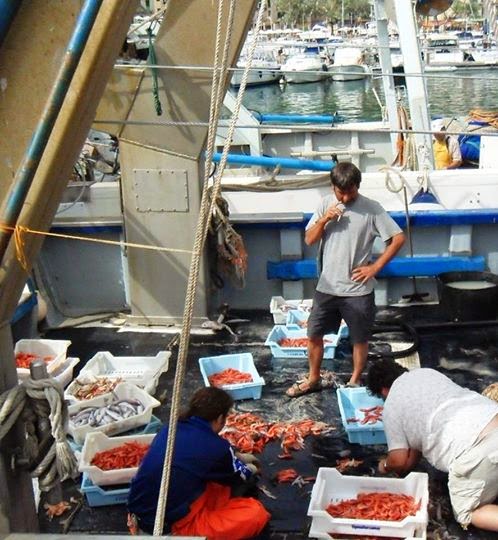 Soller prawns and lottery winners are in the news

Does the name Yotam Otolenghi mean anything to you? If you are a serious foodie and read his columns in the Guardian it will. Famous for restaurants all over London and cook books which are at the top of everyone’s Christmas list. In a recent Channel 4 cooking programme on Mediterranean cuisine Yotam Otolenghi announced that Soller prawns are the best in the world. He spent ten days here in the summer filming for the ‘Mediterranean Island Feast’ programme and has published his Majorca recipe on his website which includes the prawns. This chef has tasted them all from Dublin Bay to New England but for him there is no contest – he endorses our own Soller prawns as the best.

The fishing fleet of the Port of Soller is a commercial business. The boats don’t go out each day to provide a tourist backdrop but to earn a living. The Soller fishermen are well respected in this community and people listen when the group have something to say. They are shouting from the rooftops this week and making their protests heard at the Town Hall and to the Balearic Ports Authority. They are complaining about the cruise ships that have been visiting Soller this year. Thirteen of them have moored at the mouth of the harbour on different dates through the season. The passengers are taken off by Tender and spend their day exploring Soller and its Port or going off in coaches into the heart of the Tramuntana. This is business that the City is anxious to have and they hope to build on this number and have many more visits next year.

The fisherman say that the cruise ships are causing environmental damage to the sea around the Port of Soller. It is said that the cruise ships are dropping anchor far too close to the bay which according to them is one of the most important fishing spots in the area with an important ecological reef which should be protected. Even the Soller prawns are said to be at risk from this new hazard. The discussions about this are getting louder and louder as the decision makers protect their current interests. The feeling seems to be that the fish will always be here and the cruises bring much needed revenue and new interest in the Soller Valley. The fishermen say that we are just about to sell our birthright if the fish and eco systems are disturbed and the damage could take years to repair if ruined for the short term gain from the cruises. This debate is gathering momentum and will be one of the winter issues to occupy the politicians,the fishermen and the people of Soller who all have an opinion.

There is one man in Soller right now who everyone wants as a best friend – Lucky Juan the lottery ticket seller. He is the seller of the tickets for ONCE that netted Soller people 175,000€ this week. If that wasn’t lucky enough a group in Soller recently were the winners of 306,000€ in the National Lottery and the ‘luck’ is beginning to spread. Soller has become one of those hub places where people make a special visit to buy their lottery ticket. The El Gordo lottery which is the big Christmas one takes place on Sunday 22nd December 2013. As measured by the total prize payout, the Spanish Christmas lottery is considered the biggest lottery worldwide. For instance in 2012 if all the tickets were sold the total payout of prizes was worth 2.52 billion Euros which is 70% of all ticket sales. The El Gordo tickets are selling fast and furious in Soller outlets and there is a feeling that Soller will be the place this year that will take the big prizes. From Lucky Juan to the Lottery ticket outlets and kiosks around the place they all say thank you – they are having a bumper year.

Soller’s love of music is well known and here in the Hidden Valley we enjoy concerts, choir performances, the Town Band and a host of musicians who visit us during the course of the year. The patron saint of music is St Cecilia and Soller celebrates her input into our lives every year. On Sunday 24th November 2013 at 19.30 there is a St Cecilia Concert where many of the musicians, children and singers of Soller will perform. This is to be held at the Church of the Sacred Heart – the convent church by any other name. This local event is for many people the start of the Christmas season of music and a promise of all the good musical moments we enjoy at this time of year.
All are very welcome to this performance and support for all the local musicians who give their time and efforts so generously will be appreciate