Almost ten years ago Mark Armstrong, his wife and three sons found their way to the Port of Soller to start a ‘trouble free’ life in the sun and beauty of the Soller Valley.  Their children had been brought up thus far in the once troubled province of Northern Ireland and they felt it was time to give the family a different perspective on what life could offer as a European.  Mark’s experience of Majorca was on a family holiday twenty years ago and he couldn’t remember much about it.  They decided that Majorca was the place for them because of the frequent flights available back to their roots in Ireland and Sheffield.  The research into the weather, lifestyle and potential for an outdoor family life was all here. So armed with that information he was on a mission to find their location in the sun.  He took a car and drove everywhere on the Island looking for the place they could settle in.  One drive through the tunnel and down the mountain road into the quirkiness of Soller’s City and its Port and he was hooked.  He knew that this was the place it would be easy to call home.

Mark and Jackie are urban people who live in the heart of things in the Port of Soller.  You can wave at them when you get off the tram at its terminus in the Port.  They love the bustle of the place with its millions of summer visitors and the beauty of the beach front at the door. The children  are at the local schools here in Soller and live a life of the Solleric which they embrace to its core. The relocation brought them everything they could wish for in the quality of their family life except money and that was the key that opened the most exciting, bitter sweet career path that Mark could have hoped for.  Mark arrived in Majorca hoping the he could make a living from local opportunities but soon found that it was impossible.  To earn what he needed to fund the lifestyle that they wanted was never going to be possible in Majorca so decision time beckoned as it does for so many many people who make the move here.  Once the move is made, the family settled and all business opportunities have been explored it was time to face the reality check.  Could they really afford to stay in the utopia they had created for their family in Soller?  This conversation and decision was made all the harder because the children had made the transition and become so much part of the landscape of life here that it was cruelty to even consider moving them.

Mark Armstrong is a journalist and radio and television broadcaster.  He was born in Sheffield some 50 years ago and began a career for the BBC in Northern Ireland via a circuitous route.  He met Jackie when they were students at Newcastle University and she introduced him to the delights of Northern Ireland which was her home.  After college days were over Jackie returned to Omagh to open a business and Mark followed not sure at that time where his degree in ‘Agricultural Marketing’ was going to take him.  Mark loved Northern Ireland and was fascinated by the people and their history.  The conflict was the backdrop to their lives and he wanted to know more and more about the situation and was inspired by all he learned.  An introduction to the world of the BBC in Northern Ireland gave him a temporary clerical job there where the most exciting thing he did was to make the tea for the presenters Wendy Austin and Conor Bradford.  These were ‘names’ at the time in the broadcasting world and he was in awe of  their skills and deep understanding of all things Northern Irish.

One day a reporter was missing in the newsroom and Mark walked in with the tea as this was being discussed.  ‘I’ll do it’ was his offer to do a radio slot on Belfast’s International Flower Show.  This was where it all began and he was thereafter a reporter, broadcaster and journalist.  The BBC were great employers and pushed him off to the London College of Printing in London to do a post graduate degree in Broadcast Journalism.  Then it was back to Belfast to begin a career with the BBC which lasted for sixteen years.  To be a reporter and journalist in Northern Ireland at that time required a special touch as so many people involved in the programmes were hurting so badly from the troubles and the effects on their families.  His  work brought him into daily contact with the decision makers, the grieving and all that goes with reporting from a virtual war zone.

Greg Dyke – the then boss of the BBC was concerned that his reporters were too white, middle class and out of touch and encouraged them to take sabbaticals to enhance their experiences.  Mark took this opportunity twice and relocated his family for stints in Atlanta for CNN and to Madrid for  a couple of years with the British Council.  These opportunities expanded the families horizons and sowed the seed for an eventual family move away from Northern Ireland.

Marks family life was to be affected by the Omagh bomb in 1998 .  Omagh is too small a place for everyone who lived or worked there not to be affected by the tragedy.  This was shock wave time and Mark was in the thick of it living, reporting  and dealing with the personal aftermath.  Jackie’s business, like many that day was blown up. Presenting the Politics Show on TV after that was as a journalist with direct experience of what day to day living in Northern Ireland was like.

So time to move to pastures new and have an adventure in the freelance world of international media.  First Mark signed up with Euro News and was one of the voices of the channel based in France but broadcasting all over Europe.  Two weeks on and two weeks off back to Soller and family life.  Not quite what he joined for but it paid the bills and enabled the family to live where they all wanted to be. Then the British Army came knocking on the door – they were looking for professionals to assist them in teaching soldiers how to win the PR battles of a war zone.  Huge exercises and mock battles are created in different locations in the world and part of the exercise is to teach the squaddies how to deal with the media.  ‘Careless Words’ have always been known as the chink in the security forces armour and this training was designed to enable all to understand the importance of managing words and who they are delivered to.  This adventure meant many visits for Mark to Kenya and Canada to work on a large scale with the troops.

It was the army introductions and experience that has led him to the life he lived  in Soller and the other half in Kabul in Afghanistan.   He found many similarities between his experiences of living in war ravaged Northern Island in the height of the troubles to what he is experienced then.  Kabul is a dangerous place and the ordinary people are sick of war, they just want a peaceful life.  There is  a layer of life that just goes on as normal as the war rages in hot spots and planning meetings behind closed doors.  The military withdrawal in 2014 meant that the NATO forces had to leave Afghanistan in a better place than they found it.  There is great work going on to enable the people to carry on their lives and find a sort of democracy.  Mark’s role in this was as an International Civilian Consultant running a Radio Station and News Room which would be a cross between radio 2 and 4 as we know it.  He taught 25 local journalists to run their own station which is called Radio Bayan.  This is a 24 hour channel and the staff are very keen to succeed.  At present the station is the third most popular in the region and a most sort after training to acquire for the young Afghan team who just want to be journalists.

The life expectancy of an Afghan man is 46 years because of war and the risks that are evident every day in Kabul and any other town in Afghanistan.  Because of this there is little talk about the future amongst the average person in the street.  They want their fun and their life and they want it now.  Mark found this mentality refreshing as well as sad and hopes that his work contributed to the long term future of the place.  Managing a news team and controlling the careless words is a challenge on a daily basis in a volatile region.  He has learned so much about the country and all the stories of its past and is fascinated about where it will all go after the withdrawal.

Mark’s life until the pull out from Afghanistan was to keep his staff on track to become the effective face of news in that region.  He is back in the Port of Soller now and his life  on the military base sharing a tin shack basic army accommodation for the duration on his 3 months on and 1 month off regime has come to an end.  This was not glamorous ex pat colonial life but as basic as it gets.  Afghanistan is either mighty hot or mighty cold with the snows to go with it.  In spite of this he loved the experience, enjoyed the learning curve and earning enough money so that his family can stay in Soller where they want to be.

The word on the street in Soller is that Mark is a spy and that is why he is always off to exotic locations with the Army.  I don’t think that is the case but I do know that he has a unique take on life because of the world he inhabits.  Now that  the natural end of this contract has taken him out of Afghanistan – where to next?  We listed the worlds trouble spots from Somalia to Peru and his eyes lit up.   He is an adventurer who seriously misses his family when he is away so perhaps he’ll be home based for awhile .  Then it will be back on the trail for an interesting opportunity that will pay the bills for three sons to go to university and for him and Jackie to continue to live in Soller. 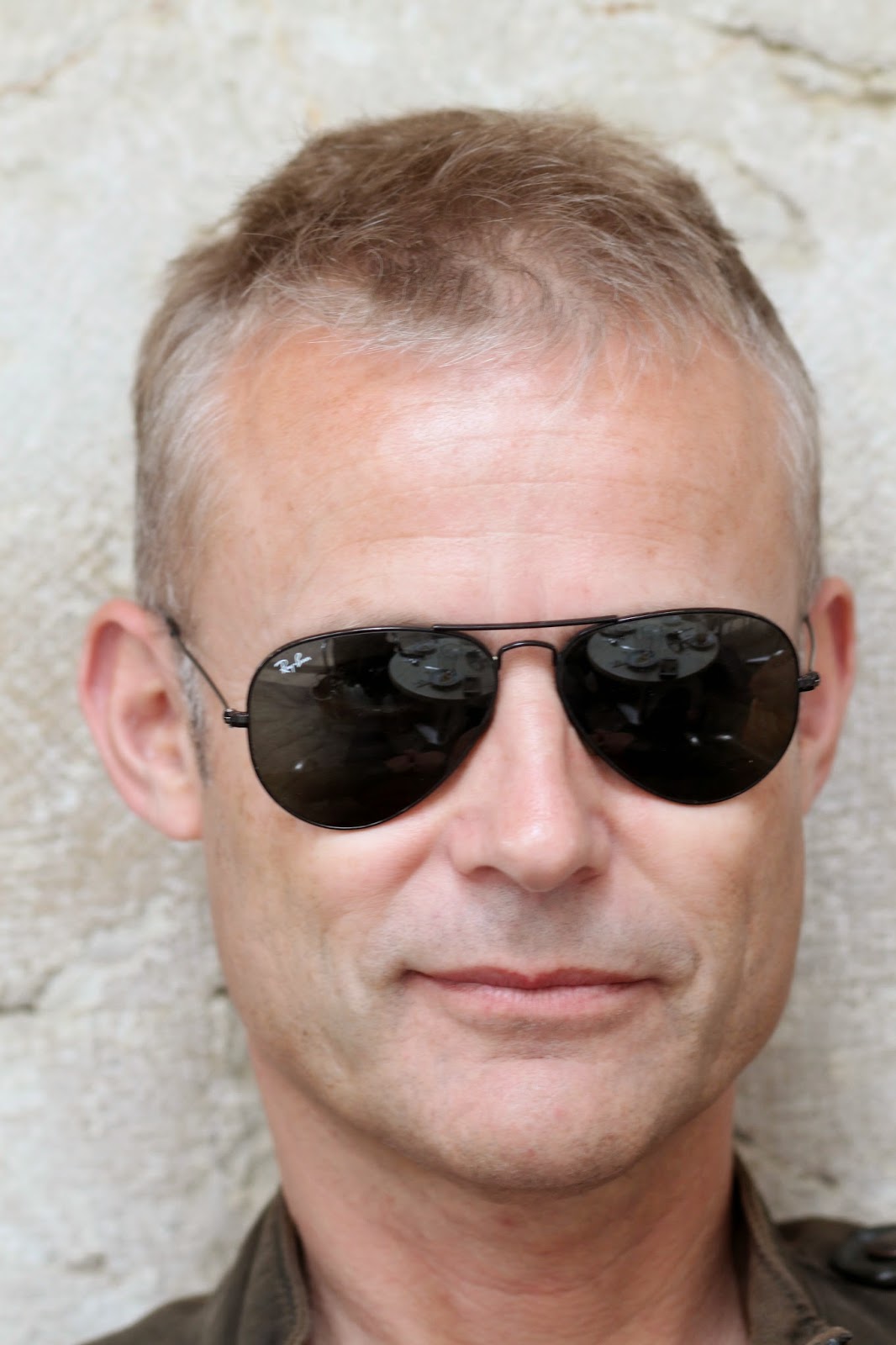