The art of the Soller Valley is what Judy Swaffin specialises in.  She was seduced by the light and glorious artistic opportunities when she first visited in Majorca in 1979.  She arrived with sculptor husband and teenagers in tow to visit a Poet friend in Deya.  He had told her that it was ‘heaven on earth’ and sure enough she agreed with that description.  One day during that holiday they caught the bus down the mountain into Soller and knew they  had found ‘their’ place.   They picnicked in Olive Groves and decided there and then to move to the Hidden Valley.  It took 28 years for that to become reality but now she has a half life here and the other half in the Isle of Wight. 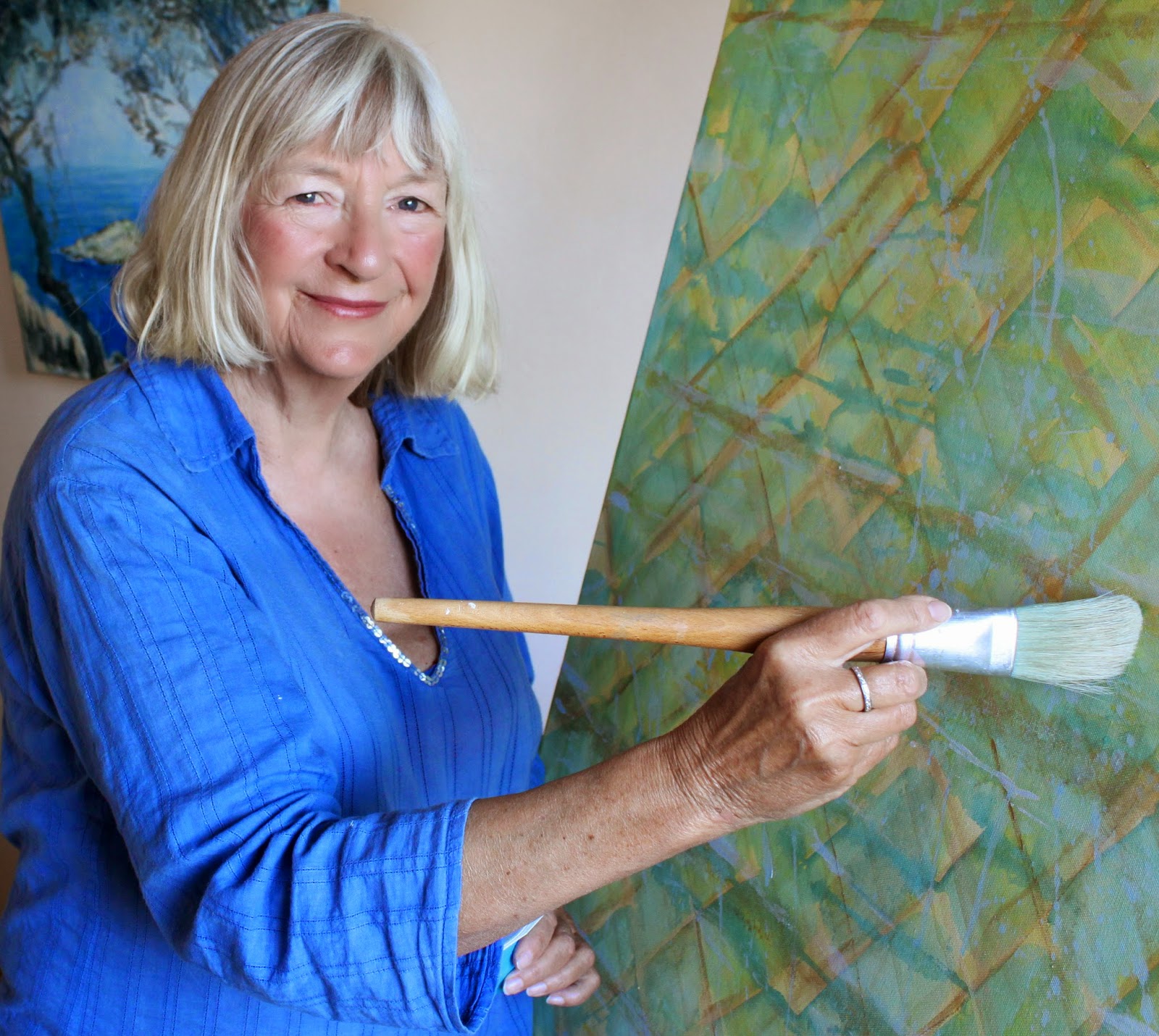 Judy grew up in  East Africa and south west England. After studying art history and theory
as part of her degree she worked as an arts journalist while freelancing as an illustrator and designer.  In the mid 70’s she became a full time artist for two years and moved from
London to the Cotswold’s. After further training in the 80’s she embarked on a career as a
painter.  Examples of her work have appeared in prestigious galleries in London including the Mall Gallery and the Royal Festival Hall.  The list of her exhibitions is  too long to mention here and takes you from the Isle of Wight via The Malting’s in Snape to the Port of Soller. 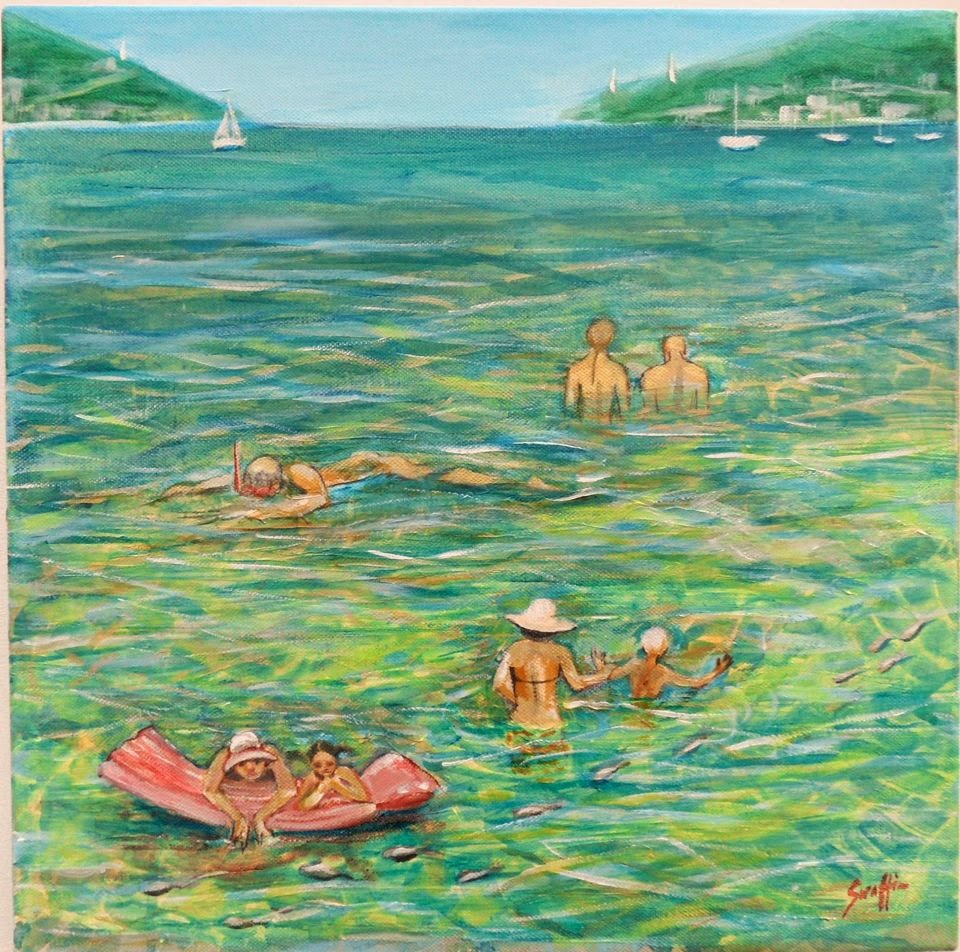 Judy says ‘I paint in series which develop an idea or theme, so usually produce several or many
related pictures. Aiming for a readable image with a strong focal line to lead the viewer
through the work and with an intricate paint surface to reward closer attention, I use
traditional oil-painting techniques such as glazing and scumbling, and also more
contemporary mark-making with apparently free brush strokes.
Recently my colours have become lighter and more reflective, my paint surface thinner
and my textural detail more subtle, possibly as a result of living in the pearly light of the
Solent for three years.
Every year I spend many weeks in Soller, a mountain-ringed bay in northern Majorca where the
age-old hillside terraces and their thousands of olive trees have triggered a series of works
moving from representation to near-abstraction through many intermediate phases.
Living and working by the sea, I am constantly aware of the beneficial effects of beach life
on people of all ages. My light-hearted series “Playtime” attempts to capture some of the
pleasures of relaxation in and by the water.’ 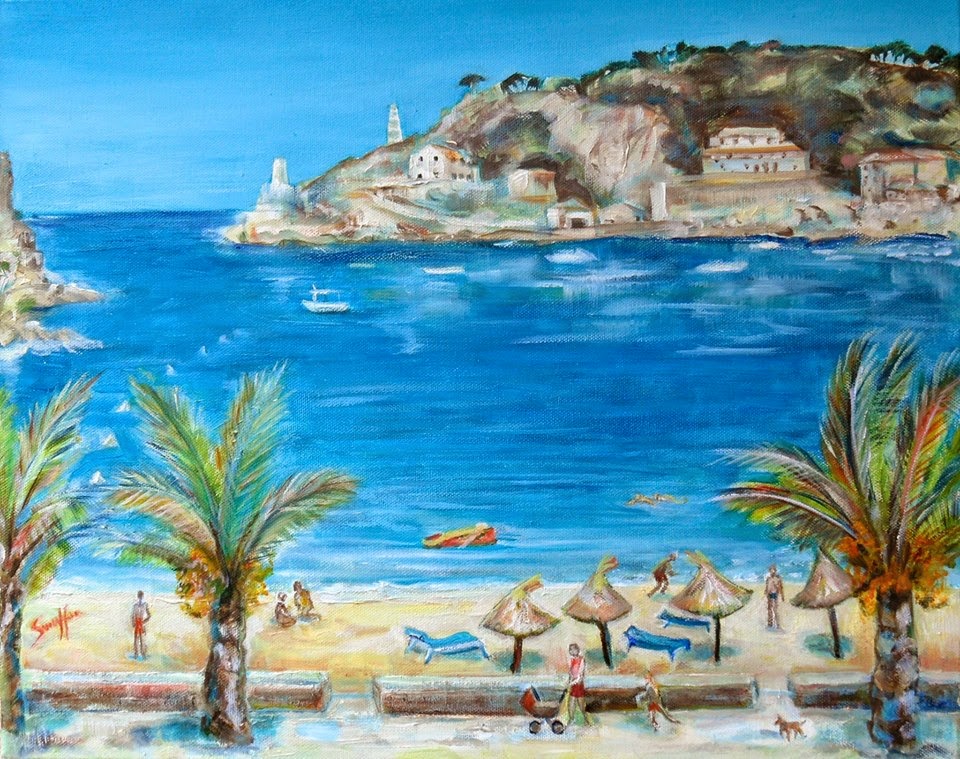 The pictures featured on this page today are examples of this style of work.

Judy is a true Solleric – she embraces the lifestyle and culture of the place and appreciates everything from the market to the mayhem of the fiestas. She loves that her paintings reflect the lyricism she tries to communicate  that  reflect the landscape and pleasure and joy she feels when she is in the Soller Valley.

She is often to be found swimming in the Repic beach of the Port of Soller half planning her next picture and half giving herself up to the experience. Her early life in Africa prepared her for the dryness of Majorca in the summer and the relief of the heavy rains of winter resulting in the richness of vegetation.  The Mediterranean light gilding silvery olive trees on their fabulous terraces makes her very happy.  She is also entranced by the sunlight illuminating the sand through the sea water and the golden effects this produces.

Judy is content with her lot in life and amazed at having achieved her ambition to be sitting on the Repic Beach in the Port of Soller painting wonderful pictures.  She sees she has much work to do and is constantly enthused by the new developments in the Port of Soller.   The new beach and the new amenities give more opportunities to record it all for posterity.

Her work is currently being exhibited with Russ Barson in Soller – phone for viewings.  The people of Soller have taken her paintings to their hearts because they welcome a true lover of the area into their midst.