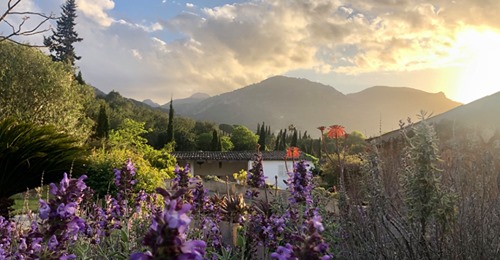 For the Humans of Mallorca

Social History writers chronicle change and raise our antennae to developments.  So it was in the lockdown days of the pandemic.  All writers wrote regularly without knowing how it was all going to end.  The act of writing and recording was a world of its own.  The ‘all in it together’ plus, the time to read the offerings, have contributed to today’s world and stories.

As one of the writers who wrote daily in the pandemic  I continue to make my own personal observations of the changes unfolding in the Soller Valley.

I believe the  introspection of that time has not left us.  Most people I know are very personally invested.  Lockdown gave them a unique opportunity to concentrate on ‘self’.  For some this meant making big changes to their relationships.  Some marriages strengthened or began the slide into separation. Serious diets were undertaken and weight loss was a way of managing the time. After lockdown some weight loss success stories became fitness enthusiasts and the ‘body’ and ‘self’ were intertwined.

To pick up life and relationships as time reverts to how it used to be has been a hard call for some.  They are finding they are just not as interested in other people anymore.  The investment in ‘self’ has become all-consuming and there is little brain time left over.

We now have the  choice again as to whether to engage with people, the community and the wider world.  Some still prefer to remain behind their mask or their front door.  Depression is the buzz word of conversations and we are only just beginning to understand the effects this has had on young people and children.

In the Soller Valley world the trend had already started for some new arrivals to build a big wall around their properties. They chose not to engage much with what went on outside their compound. Security guards and home deliveries meant that some never walked the walk to the village or town centres. This, as a trend, is now having a knock on effect to those who hate this idea.

Some are moving from the villages into Soller centre because they want  ‘real life’ action. This in turn is making the buzz of Soller and the Port even more attractive to those in search of connection and interaction. They want to live in a working town where people leave their houses to go to work.  The children fill the streets on their way to school and coffee time chatter between people who barely know one another is the norm. They respect the work ethic of the people and the traditions which give form to the year.

As a Social History observation I am well aware that this can change overnight.  The pandemic taught us that much and our progress is tentative. The financial implications of the cost of living crisis will change all the base lines again and rethinking and rebooting of ‘self’ will be inevitable.

This article is written in a ‘snapshot’ of time on 13th May 2022 and allows for the concept of fluidity and change.

How will all this read in 6 months’ time?…