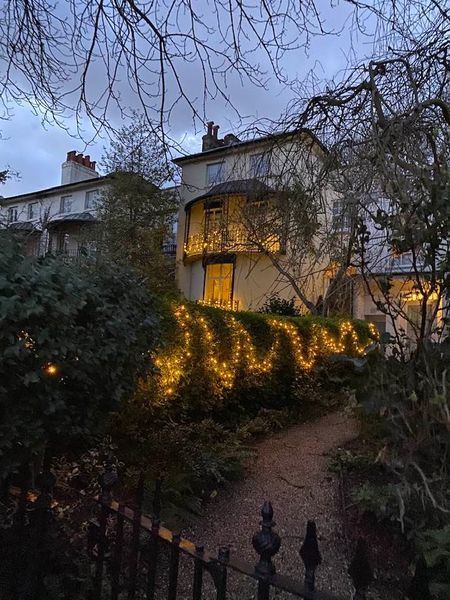 A little nod to Social History by Shirley Roberts

Urban planning has immediate and long term effects and changes the course of history for many locations.  If I take you back to the North London which existed before I arrived in the world you would find mansions and servants.  The leafy lanes and fields of Kentish Town and Tufnell Park, the lower slopes of Highgate and all the areas around Hampstead Heath and Parliament Hill were very smart and monied.

The planners had their wider perspective and a vision for the railways which would link London to all destinations north.  This meant over thirty years of ‘demolition, digging and dirt’. As this all began, the affluent left in  droves, leaving their large palatial homes no longer occupied by one family.

This began the change for this area where multi tenanted houses became the norm.  The workers building the railway and the road infrastructure of London needed somewhere to live. From the 1940’s onward, my bit of North London changed its population.

The incoming workers from Ireland and the Caribbean lived alongside the Londoners in our streets and life spilled out onto the pavements.  The houses were overcrowded with many sharing one room as they lived frugally.  Many sending  their wages ‘back home’ to support their families .

In a few short years all that remained of the past was the huge, crumbling houses which no-one could afford to maintain.

The next bit of Social history began the change where slum clearance, social housing and an even wider vision was evident.  This started the next phase of ‘demolition, digging and dirt’. In the North London that I grew up in, our saving grace was our proximity to the lungs of London, in the shape of Hampstead Heath and Parliament Hill Fields.

In 2022 this area has a mixture of the large houses, now fully restored to one family living. Plus some social housing run by the local council and housing associations. Many of those homes were purchased by the tenants at the time the ‘Right to Buy’ scheme came into being.

This is a very desirable area once again and it is as if the 50 years of ‘demolition, dust and dirt’ never existed.

In our Soller world the planners of the last hundred and fifty years were also very busy.  The reality for the railway to connect Soller with the rest of Mallorca was the dream.  This was worked on by a group of visionaries who would not be put off by all who resisted change.  The Soller world, behind the mountain was one of young migration to France and the areas once colonised by Spain.  If the harvest failed the people were hungry.  Their children sent money home from their lives in other places.

Lack of funds meant houses fell into disrepair and the villages were in decline as the young people left to find their work on the mainland and further afield.

The ‘demolition, dust and dirt’ started plus the explosions to blast the mountain to prepare for the train.  The number of tunnels the train goes through up the side of our mountain tells you how much blasting had to go on in this era.  The vision for the future was unstoppable no matter how much resistance was endured.

The train started a revolution in the Valley and now anything was possible.  The Tram linking the Port to the system was absolutely essential.  Tourists, using the tram today can have no idea that the tram, in its time was used to transport, oranges, torpedo’s and livestock up to the train for their onward journeys.

The derelict houses and multi occupation  by workers was a feature of life in the Soller Valley.  This changed as some of the returners from early years migration, came home with money.  Beautiful houses emerged and the street infrastructure was improved.

In 2022 this is a most desirable area to live and every day deals are done with incomers who buy here.  The last 50 years has seen the Soller Valley being discovered by a new wave of friends from Europe.

The ‘dust, dirt and demolition’ goes on all over the place as houses are pulled to pieces and then restructured as the rules allow.

We can look back and admire the progress made in London and Soller. I admire those with the intelligence to have seen it through.  Nothing stands still, and right now, in both places there are those who are putting the finishing touches to the next 50 year plan.

I am impressed by the work of the past and very excited to see what the future holds for both locations.