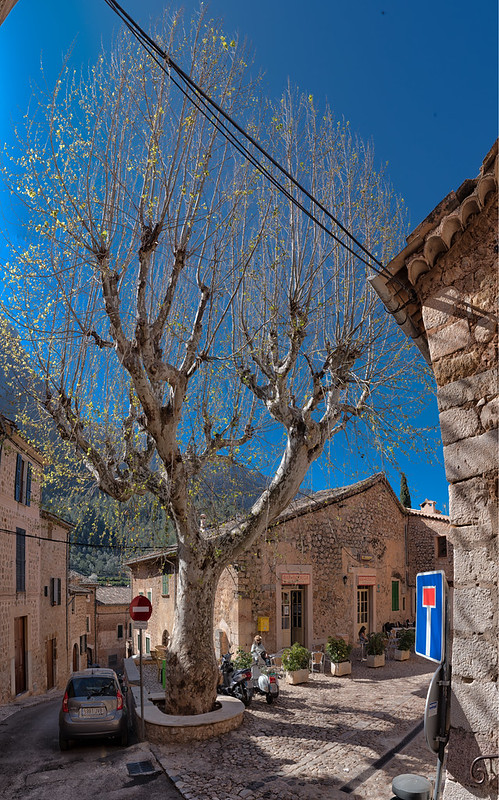 The tales of the people who live and visit here are many and varied.  Some are obviously here to make money in whatever way works for them. Scams, criminality and opportunism exist in Majorca just like anywhere else in the world. We all like to think we live in a world where kindness and light prevail and mostly that is true.  However for the sake of residents and visitors I will tell the stories which I have been involved in this week.  They all have much the same theme.

Pickpockets love crowds and when our Saturday morning markets take place we know they join them.  Indeed in Soller and other market places, plain clothes police are out and about trying to prevent anything happening.  Even so, every week some lose their purses, phones and wallets and there is a steady stream reporting to the local police station their problems.

Most people are very aware this can be an issue and organise their purses and such like in different pockets.  Some have everything in their backpack and make it easy for the light fingered to lift. Some visitors carry everything with them at all times. Passports, credit cards, cash and these are often found discarded by the roadside or in a local rubbish bin.  What the thief is really after is, immediate, ready cash.

Our beachside cafes and restaurants are on the ‘sprinters run’.  A fit person runs by and lifts from a table what he has already identified.  A purse, a bag or a phone on the table is easy pickings if you can just run and go. People have been known to give chase but these people have done their training and can be gone in seconds.

Every victim is traumatised by what is taken.  The cash is the least of their problems but all their identity and credit cards mean hours of phone calls and replacements. The sour taste in the mouth of the experience has ruined holidays and made some determined never to come back.

This week Sollerweb were contacted by victims of the 2022 scam and the story is told like this by one of the victims.  The location is on the quiet road between Biniaraix and Fornalutx.

I opened my wallet to the coin section and scrambled to find some 20 cent coins and found 4 and my wife found a 50 cent coin in her purse
The guy tried to help by putting his finger in my purse to sort the coins and eventually accepted 1 .3 Euro in return for giving me 2 euros

He then asked us to take his photo with his phone camera which my wife did. He then left and  asked which way it was to the centre. I pointed but he went the opposite way.  This didn’t make sense  to me i.e. he gets less than his 2 euros worth and goes in the  out of town direction.

So I checked my wallet to examine his coin and found I was 250 euros less i.e. he’d very skilfully removed over 250 euros in banknotes from under my nose! Wow!’

The next story came from Deia where friends were approached in exactly the same way by a man in a German registered, silver colour, Golf. Friendly chat, no hurry, engaging in conversation about change for a parking meter. No money lost on this occasion just loitering looking for an opportunity.

Then the Fornalutx version of the same story.  The man was in the car park again asking for change for the meter. He was chased away by a resident who had heard this story before and was suspicious.  He ran away and disappeared very quickly.

The moral of the story is obvious but this script is obviously working for our thief.  He engages in plausible conversation and is a highly skilled operator. Once this story began to circulate on Sollerweb Facebook, people contacted us to say they were embarrassed, that they too had lost money by helping this man.  They felt stupid at being taken in and had not reported it to the police.

We live in a wonderful world and the visitors are flocking back to Majorca.  Sadly those who make their money as pickpockets and thieves are also returning.  Holidaymakers have cash and sometimes they carry it with them. Holiday islands are not a huge part of the cashless society which now exists in many cities. Maybe the moral of the story is ‘flash your card’ and not your cash.

Humans of Majorca come in all guises and generally are genuine, great people. We all have to be a little discerning in day to day exchanges and if something seems ‘a bit odd’ it generally is…