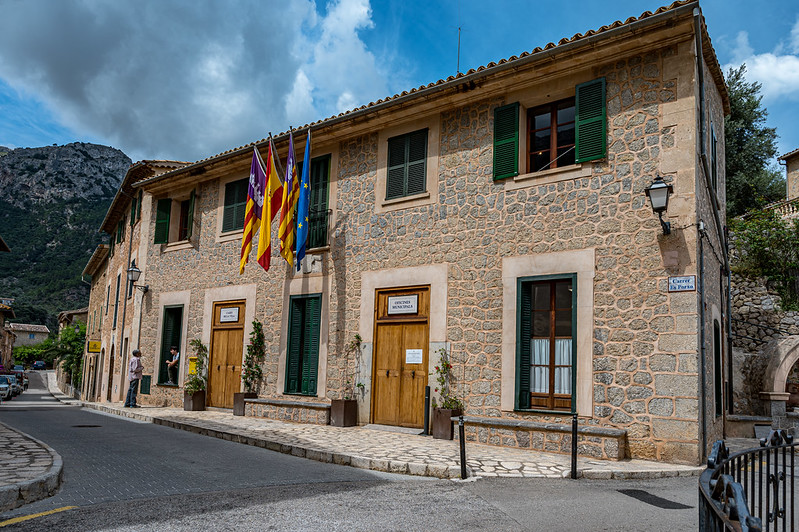 The North West coast of Majorca holds many treasures.  From Valldemossa, the coast road to the Port of Soller is a journey of the world.  Take that turn and the delights which Arch Duke Luis Salvador of Austria found here all those years ago remain and have been extended.  The Archduke was a remarkable man he arrived in the area in 1872.   It is said he spoke almost every European language. He had a love affair with many and left a legacy of blond haired children along the coast. He alone formed the landscape we still enjoy and the lack of deforestation.  He had a passion for trees and would not even use local wood to heat his own home.  This mind set was to cost him a huge amount of money because local landowners were not slow to take advantage of this perceived weakness.  They realised that whenever the woods within sight of his home were threatened with the axe, the Archduke, to save the trees, would buy the land on which they stood. That meant that he became the owner of thousands of acres of mountain wooded lands along the North West coast.

This vista sets the scene for Deia but doesn’t give you a feel for the ‘Marmite moment’.  Deia is a village enveloped by the Teix Mountain. It curls around on three sides making you either feel safe or too enclosed and hemmed in.  The latter group visit but don’t tarry.  The rest, spend their whole visit working out their lives and finances in order to live here. The enchantment of Deia is contained in its past, present and future.  The Mediterranean village with one street and hike up the hill to the church could be replicated in many parts of Spain.  It is here in Deia it comes to life as a ‘state of mind’ and not a location.  Certainly one of the most beautiful villages in Spain with a story around every corner. As long as you believe in what Deia represents, feel the magic, embrace it, then Deia is for you.

The Archduke set the scene and parked his boat in the Port of Soller.  Aristocratic visitors from Europe made the trek up the mountain to Deia in carriages and on horseback.  They brought with them the expectations of the rich and a panoply of life that local Majorcans could never have envisaged.  In those days, highly religious Majorca, lived a feudal life of church and farming. There was something about this which really appealed to the Archduke. Sometimes he would dress as a shepherd and stay out with his sheep for days on end. In time, the rich and peasant world mingled, and all felt the effects.++

Deia’s farms gave way to a hostelry or two and early visitors followed the Archdukes entourage up the mountains to this place.  Sa Fonda, beloved of so many, emerged and became whatever you wanted it to be.  A guest house, a restaurant, a bar and a long term residence of many paying guests.  Today it is the music venue of choice of the village and a cafe. Sa Fonda is the starting place for many relationships and was certainly where Jackie met Bill Waldren in 1959.  They arrived in Deia like so many, at the time that America was on the move.  The generous USA, to thank their citizens for their war effort, encouraged them back to education.  The artists, writers and poets of the time spent much of that time abroad and a colony of them settled in Deia.  An artistic, poor, paradise with no electricity and the most basic of amenities.  Live like the locals, was the only way this group existed this, in its turn fed the souls and lifted the lid on talent.   Many articles and books have been written on Deia and the one that is a ‘must read’ is ‘Insiders and Outsiders’ by Jackie Waldren.  This tells the story of the place and develops the theory that Deia has been much enhanced by the arrivals of the eccentric Outsiders who chose to live amongst them.+Bryn Hughes

Deia has people whose life is intertwined with the place and brought thousands to have the same experiences.  Robert Graves pitched up in 1929 and lived in the village for most of the rest of his life. He was followed in the 1950s with all the creative types whose lives were paid for by the USA. Then there were the hippies who fell in love with life in Deia in the 1960’s. After that came The Residencia joining the Es Moli as the hotels of the area.  The sheer luxury of the hotels plus the history and the charm of Cala Deia and the coast road made this an ‘in place’.

The stars and the moneyed came and the Deia we know and love today was born.  What they had in common, at that time, was their participation in village life and respect for the tradition of the place.  The fiestas and celebrations were enriched by the likes of Andrew Lloyd Webber and Bob Geldof pitching up. These changes were welcomed by local people who truly thought that incomers had saved their village.  No longer did the children of Deia have to leave to find work.  The hotels were an absolute lifeline and many, many locals found their careers in hospitality right on their doorstep.

Now, what will you find when you call into the Deia of 2022? The one road through the village remains with all the side roads and paths not for the faint hearted.  They are all ‘side of the mountain routes’, with some being wider than others.  The heart of Deia is contained on the route to the St Johns Church at the top of the hill. A dense area of traditional houses built on the slopes all leading to the church and the most magnificent Valley view.  Trained eagles often soar that valley and it is great to watch the beauty of nature.  The Church itself has many claims to fame and the graveyard is a literary delight. The Church has wonderful acoustics and is used regularly for classical concerts.  It also has to be the most popular location in Majorca for weddings.  At Christmas people travel from all over Majorca to see the Belen.  This traditional Christmas scene is added to by craftsmen every year and is a significant part of local people’s celebration of the season.

The Museums of Deia are fascinating as you can wander Robert Graves and Jackie Waldren’s houses.  Jackie had the Archaeological Museum just off the main street.  The Robert Graves House is slightly out of centre in the direction of Soller. The Hotels are supporters of art and music and hold regular concerts.  Son Marroig – the Archdukes house of the past also has a world famous series of concerts every summer.  This place is out of Deia in the Valldemossa direction.

The many that holiday, or have houses here, enjoy their own cove in Cala Deia and their only complaint is its popularity.  After the Night Manager was filmed here the whole world wanted to eat fish at the restaurant in on the beach. Deia has always been on the map but in the last couple of years many have discovered and fallen in love with it.  The sea joins the mountain walks for the active holiday maker.  Many others just want to sit and soak up the ambience and see what Sa Fonda and the Robert Graves mind set has to offer.

With extra visitors Deia has begun to change.  Car parks have been built and village houses have undergone expensive renovations.  Deia has always changed and always will, nothing stands still.  Local and incomer will always co-exist and become Deia people when they are together.  The real people of Deia have no time for any incomer who builds a mansion in the hills, encloses it with a gate and flies in staff to look after it.  Deia still is a ‘state of mind’ and the real people of the place still want to mingle, create and co-exist in a squashed together kind of way.  They are content with the mountain which surrounds them and keeps them safe.

Deia is a unique place and the only way of knowing if you are ‘one of them’ is to turn up and visit.  You will be welcome, of that, there is no doubt.  You will return again and again once it gets hold of you.  Many say that they only feel their real self when they are here. With the music, the muse, the mountains and the vibe, Deia’s future is assured. This place has enabled talent to be the best that it can be.  What a wonderful legacy…