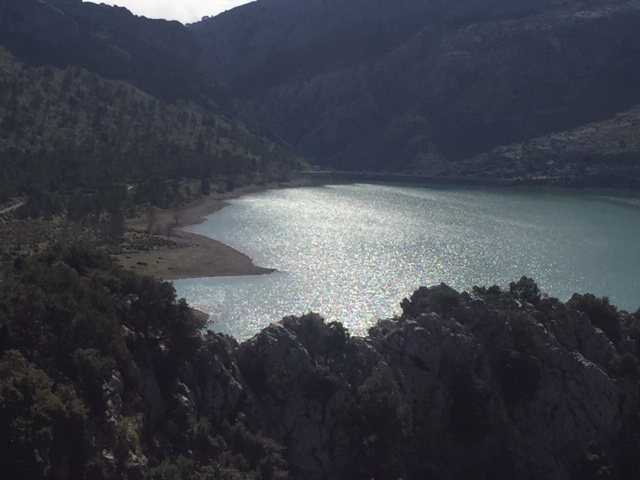 To get to the beaches of Caribbean level in Majorca, I have to drive, for half and hour, to pick up the motorway.  Muro and parts of Alcudia are stunning beach favourites but sometimes they are just too far.  With a nippy hire car this week I decided to get on the mountain road which is five minutes from my door.

My journey was up the American Road in the direction of Pollensa using the scenic route.  It’s the American road because they built it for us in their years of presence in Mallorca.  Many were stationed at the top of the Puig Major listening station and others in the 6th fleet based in Port in Palma.  The Americans have played a big part in the last 70 years in Majorca.  A whole infrastructure was built round them including American schools and Clinics.  That is not to mention the young people of the time who had a great time with the lads.  The stories of the parties in the buildings on top of the mountain are legendary.

The military followed the artists, poets and painters who were sent here on the Military Bill. Deia knows all about that era when many artists lived and worked in Majorca and were financed by the grants in honour of their military service in the last war.  The 6th fleet were the sailors on patrol round the Mediterranean who had their R & R base here together with some of their families.  The USA is a significant part of our history and one of the reasons so many of them live here in retirement.

I used their wonderful road to go up, up and away this week. Passing the turn off for Fornalutx and then the Mirador I was just climbing towards Monnabar and the tunnel. I have to describe my companions on the road as they were all four legged.  No cars just me and some loud ‘George Ezra’ kept the animals company.  It was like ‘Animal Farm’ as the goats and sheep wandered the roads as if they have forgotten what cars are.  I almost expected to see a tea party of rabbits or a meeting of lambs having a chat.  You had to have been there of course, but it was mighty strange.

Through the Monnabar tunnel with its new lighting and then the road goes down to the Base Station in the mountains. A village behind barbed wire for the Military and they are still looking out for the tennis ball on top of the peak which listens in to Europe’s secrets.

Then the stunning view of the Cuber reservoir come into view and explodes into majesty.  The sun, the shadows, the glory of our beautiful island is encapsulated in this place.  A few cars parked indicating some walkers around but not a soul was seen.

On to Gorg Blau next which is another glorious reservoir.  I stopped to take some pictures alongside a couple and their picnic. We were the only people in the world and the Cava cork popped.  A celebration of life in all its glory.  I moved on and left them to it and then the Escorca taxi in front of me became the pace maker.  He knew the road and he wasn’t going to let me or anyone else behind him move faster than allowed around those bends.  We were companions until the turn off for Lluc. By that stage there were at least 10 cars ready to roar!

Lluc and all its glory waited for me and allowed me to park for 2 euros.  What an eerie place it was in its glorious isolation.  I wandered the gardens and used their facilities and in total saw four people.

I loved the new sculptures and installations by artist Joan Bennàssar. Entitled ‘Refuges of Love and Offering‘, the exhibition of sculptures and large paintings is being installed in the Plaça dels Pelegrins (Pilgrims’ Square) and in other emblematic parts of Lluc. The public is being invited to visit and to reflect on human values.

They invite reflection about the times we are living through and the crisis of values that humanity has long had to confront and which has been exacerbated by the Covid pandemic.

The exhibition arrived in December 2020 and few have had the opportunity to see them yet.  Not only I have Lluc to myself but also these wonderful sculptures just for me.

A coffee in a flask and then down the mountain and home.  The animals had cleared the road and nothing blocked my way.  I had been to the top of the world and back and it was good…