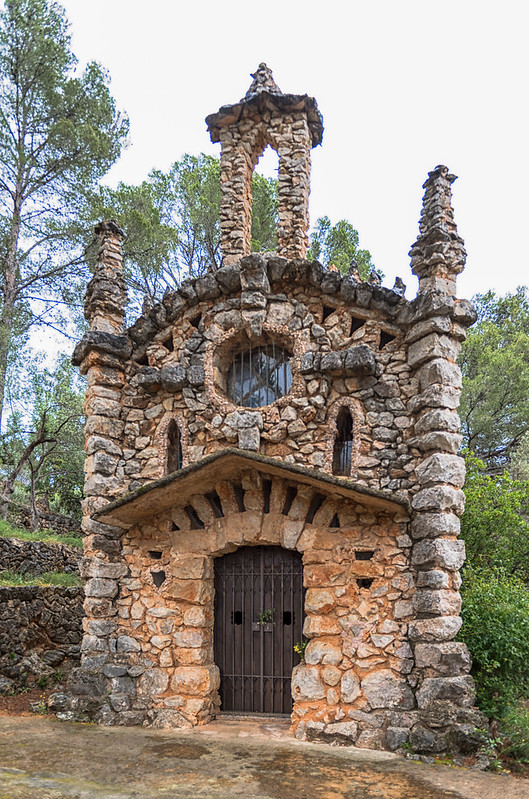 A family meander to the heart of our Soller Valley world this week.  Under the rules of our restricted lives I can go for a walk with my family because I live alone.  So no breaking of the rules or the moral judgements of those that raise an eyebrow or curl their lip. This is one of the favoured walks which always remind us of other times and other people.

Sa Capelleta Santa Maria de l’Olivar is a hidden church situated on the road between Soller and Fornalutx, three kilometers from Sóller. The sanctuary has a fairy-tale architecture and it is unique. It is a popular trail – you will find the signpost from and to Soller for walkers. Sa Capelleta Santa Maria de l’Olivar was built in 1915. The complex also includes the pilgrimage chapel “Sa Capelleta”, which has the architectural style of Antoni Gaudí.

The Sa Capelleta is supported by four pillars made of stones. The interior has the style of a grotto with stalactite formations. In the chapel there are figures of the Virgin Mary and Saint Bernadette. Sa Capelleta Santa Maria de l’Olivar was a favoured venue for the weddings of local people.  Many friends tell us of their weddings their and the huge gatherings which gathered in the courtyard.  The Church itself has space for 4 people.

This is one of those visits which can be made by all ages.  Access from the main road towards Fornalutx gives the entrance to a great car park.  Older group members who do not want to do the walk can drive and easily join the fun.  The Soller walkers will often pass this place on their way to higher altitudes and others just stop when they get there.  In my family this is one of the picnic places to sit awhile and explore.

In the Church life of Soller, this location is used in the larger church nearby, as one of the centres for young people as they prepare for their first communions.  The sound of a guitar and young people’s voices can often be heard in normal times.

We all describe this building as gothic but of course it can’t be. It wasn’t built between the 12th and 16th century for a start.  Why was this roughly hewn church built in this location in 1915 is the question? I have been hunting for the story and I bring it you courtesy of local historians…

‘In 1904, the marriage of Na Catalina Verd Mayol and Damià Canals i Bernat ceded land near the Camí de Bàlitx, in the Olivar des Fenàs, so that a chapel dedicated to the Immaculate Conception could be built.

The great devotion of the people of Soller towards the Virgin of Lourdes led to the chaplain of Sóller, and a son of the same population, Pere Lluc Ripoll i Moragues (known as Don Perico de Can Gordo) promoting the construction of the hermitage. Both he and his sister, Mary Magdalene, financed the works with the help of the collections made by the members of the conferences of St. Vincent de Paul.

The whole church was designed by the sculptor Miquel Vadell, as well as the sculptures, although they were removed due to lack of polychromy. There were two sculptures, Santa Bernadeta and the Immaculate Conception, the latter with the addition of two wings is now the angel next to the cistern.’

So many stories are told of this place including local builders involvement but I think today we have got nearer the truth than ever before.  The nearby L’horta district of Soller have a special affinity to this place and they claim it as their own. Many weddings of L’horta friends have taken place here.

My Nan’s Days Out and family meet ups often end here with a picnic in the shade.  If you have never been I recommend it to you.  A gentle arrival by car or a hard man walk up or down the mountain is your choice.

How to get there – Drive to the Monument roundabout between Soller and the Port.  Take the right turn in the direction of Fornalutx and Lluc.  Well before the Fornalutx turn off a right turn marked Santa Maria d’Oliver is signed.  Follow the cobbled lane into the smart car park. You have arrived…