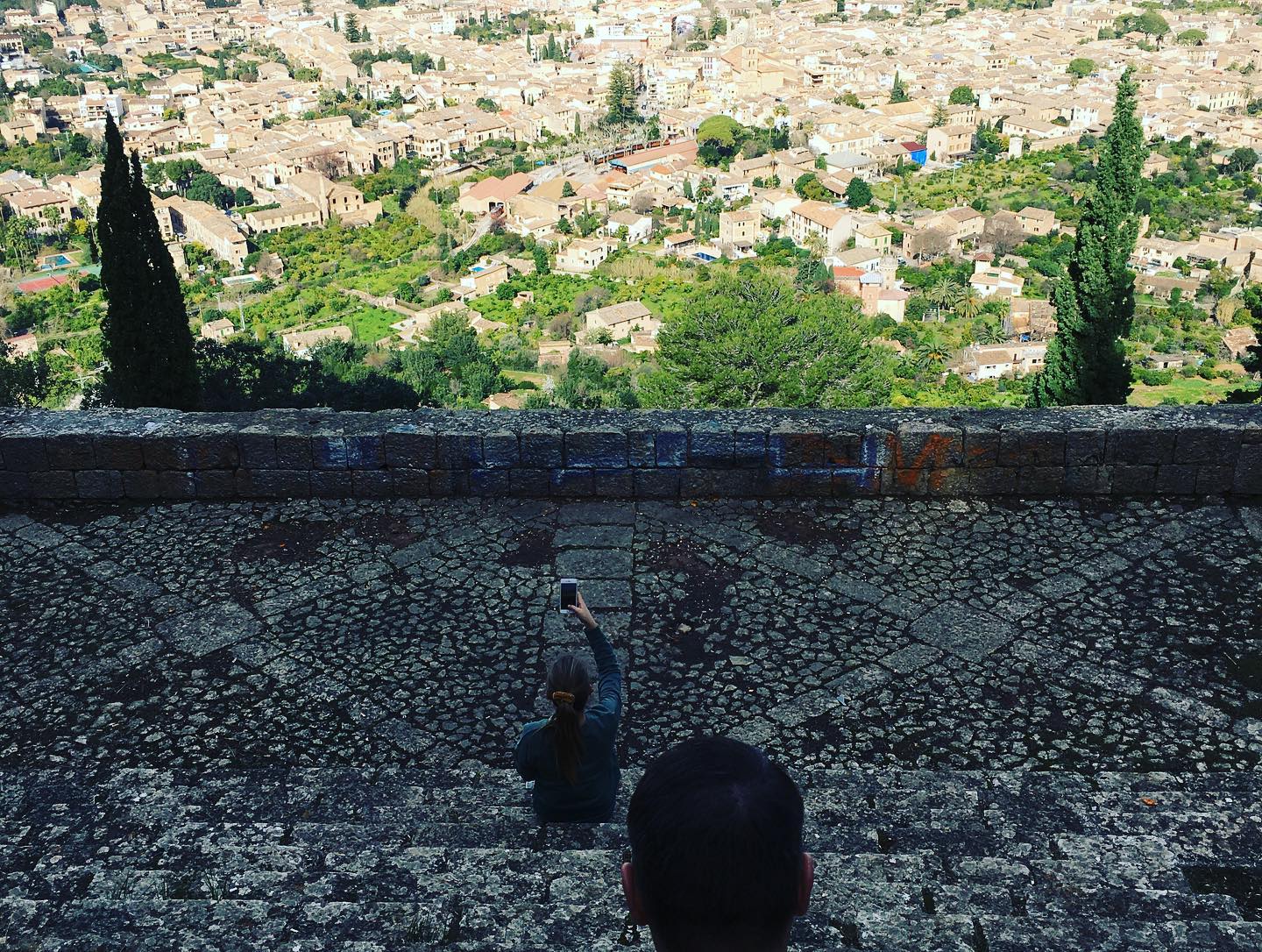 Under the current rules I am allowed to go for a walk with a member of my family.  This week we didn’t get in the car but just walked the walk of the faithful towards the Cemetery and beyond. This is a much loved walk when you know where you are going.  The view of the Soller Valley looking out to sea is just glorious.

This walk starts from Soller station where you turn right up the alley past the El Guia Hotel. The climb is above the station and is through the streets of that end of Town.  The Cemetery is signposted and just an uphill climb on tarmac roads.   These streets are a very densely populated area with the Estiradors community at the heart.  Each area or barrio of Soller has its name and its traditions.  Estiradors is one of the few who have a traditional annual fiesta which lasts over three days.  Karaoke and line dancing are features of this party and lots to do for the children. Of course, I am talking of normal years, which we hope will come back soon.

The children’s playground at the bottom of Calle St Pere is the focus of the party life and bonfires of Estiradors.  The nearby car park becomes the outdoor theatre occasionally and the cars find somewhere else to park.  A thriving, committed community is how I would describe this area in the foothills of the Cemetery.

As we wandered up, we past friends houses, and smiled at them over our masks.  What a funny old world when you can’t stop for much of a chat.  The Cemetery covers a huge part of the lower mountain.  Layered and beautifully designed it is an architectural, historical museum in my opinion.  The graves are well kept and the flowers and trees beautifully maintained. Our quest on this day’s visit was to find the protestant Cemetery and to understand the story that goes with it.

There was a time when to be buried in the cemetery of Sóller the deceased had to have a mandatory license issued by the Catholic Church. If the person who had just passed away was in mortal sin for some serious cause, had been the victim of suicide or simply professed a religion other than Catholic, then he did not get approval for his body to be buried along with the rest of his fellow citizens.

Sóller City Council solved this problem in 1884, after the Civil Governor ordered the construction of a civil cemetery, also known as the stinking cemetery or Protestant cemetery. In fact, in Soller there are two Protestant cemeteries, because on the upper side there is a second strip of land, the result of an extension in 1965, which was created. The first Protestant cemetery is in front of the moat house. The architect Joan Guasp Vicens is the creator of one of the first extensions of the cemetery and the rehabilitation of this strip of land in which there are currently about twenty graves.

In the 1960’s this was a big issue as more travellers and residents died in the Soller Valley. The consulates of both the UK and Germany pressured for a non catholic cemetery.  In 1963 approval was obtained for the construction of a second civil cemetery. The architect Antoni Coll drafted a project to build 42 tombs on a terrace which is located at the top, still separated from the rest of the grounds. In 1967 the Vatican laws on this matter changed and burials are open to all.

Every grave tells a story and represents a life lived.  This is a beautiful place to understand some of the names and the social history of the Soller Valley. Our glorious day then took us out of the gates and up to the Three Crosses Memorial.  This is a very important landmark for those who want to understand the history of this place.

Frequent pirate raids of the past forced the faithful to hide their Church gold and artifacts in the caves above the Cemetery. In time the Three Crosses memorial was placed there to thank God for looking after them and their church in times of trouble. This is a frequent walk for Sollerics and apart from the exercise the views are just spectacular.

Our Soller Valley world is full of adventures and walks.  The Cemetery is not a depressing visit, far from it. So much of the past history and secrets are buried here. The headstone messages transport us back to a different phase in the life of this place.

Nan’s Day Out is always worth the chat and the walk, this is one I highly recommend to you today.

Thanks to GM for Cemetery history info…