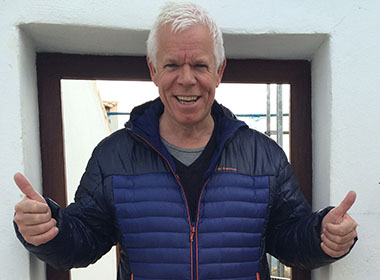 Ronald was an adventurer from the Netherlands. I say was, because these days he is to be found in downtown Soller living a busy productive life. Even adventurers have to find their place in the universe in the end. He left his native Netherlands when he was 23 and headed for the world of South Africa.

His background in Construction and Engineering was put to good use as he discovered the magic of the South African life. Regeneration and development was as much a part of South Africa then as it continues to be today. Ronald Wit started his career as a civil engineer in South Africa in the 80s and 90s and managed large construction sites (building and civil) as a site agent. He was responsible for quality control, costing, design and daily site management.

The weather, the vibrancy and the life was a magnet to him and many like him. His South African years were a huge formative part of his life but eventually the game plan of life required more training and he went back to the Netherlands.

He furthered his studies in the 90s as a property surveyor in the Netherlands. Ronald carried out property valuations for banks and building societies. As well as building surveys of residential property for the provincial government for insurance purposes. So now with experience of large and small projects plus qualifying as a surveyor he scanned the world for the next part of the life plan to unfold.

What he understood most, coming from the flatlands of Europe was that South Africa had taught him his need for sun and blue skies. This quest and the skills he possessed was the game plan. A holiday to Majorca in 2006 introduced him to a whole new world. The combination of his vast language skills (Dutch, German, English, Spanish, Afrikaans) and his property renovation experience meant that the job offers were soon on the table.

Biniaraix was his focus as he bought a house there and set about the renovation of his own property. This was the biggest local learning curve of all. Nothing in any other country had prepared him for the planning and bureaucracy of the Soller Valley. He knew he had to fully go through the process himself before offering his services to anyone here. Mission accomplished and mistakes learned along the way and then Ronald was ready to fly.

Since his arrival in Soller 15 years ago he has overseen the renovation of over 60 properties. He is a guide and confidante to many because his relationship with his clients starts in the early days of their property search. He is called in by clients directly or via the Real Estate Agents who work with his expertise.

The early meetings outline what is possible and what the likely time frame and costs will be. Ronald deals in reality and often the client’s plans have to be adjusted to take into account the rules on renovations in Mallorca. He spends his time managing his client’s expectations

As Ronald speaks many languages, clients understand the discussions and can take an active part in making sure the professionals understand their dream. Ronald also has testimonials to his work on most street corners of Soller. After the initial meeting clients often go with him to visit completed projects and those under construction to see the standard of workmanship they are buying into.

Ronald’s world has included civil engineering, project management, property valuation, real estate sales, accountancy, architectural design and pool building. This gives him a unique perspective on Soller Valley properties and why many arrive as clients and leave him at the end of projects as his friends
.
Ronald has managed to find the time to move from Biniaraix into the centre of Soller. This time the renovation was not done by him but by the team he employs to work with him on all his projects in Majorca. Without the expert team of all the trades his work would be just words. To coordinate the timing of all the other trades people and experts is the key role in his working life.

He has now found the time to move into the next part of his creative life here. He works with many clients who buy in to the whole experience of Majorcan living. They want paintings and photographs for their homes and sculptures for their gardens. They are interested in art from the simple to the Avant garde to enhance their beautiful finished homes. These days a visit to Ronald’s home is like visiting a pop up gallery with works of artists to view. This was never part of the plan but just a consequence of the people he works with needing just one more professional service which he is happy to provide.

Ronald has now lived in Majorca longer than he has lived anywhere else. His projects take him all over the island but Soller is his home. There are many houses in Soller who have had the Ronald Wit touch. In fact, I have a number of new friends who are undergoing the major house renovations with him this year. They all say the same, what you see is what you get and there is no-one better to fight your corner with the authorities than Ronald. Planning and permission negotiations and a highly skilled workforce is his thing!

South Africa was a vast training ground for this Human but Majorca works for him now and he can’t see that changing anytime soon.