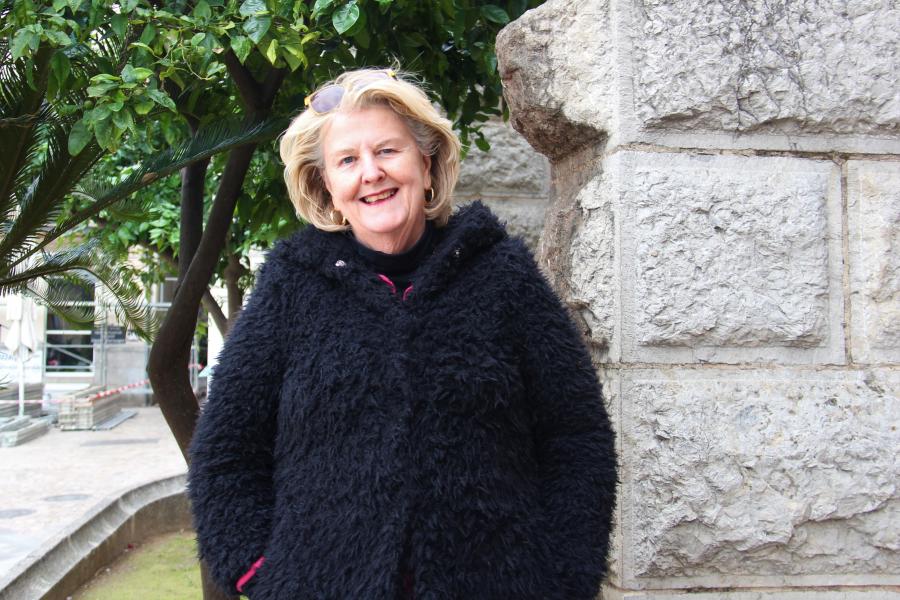 Shirley Roberts is a British woman in love with Soller. In 2003 she moved to the village, where she lives near her daughter, son-in-law and three granddaughters. She, along with Tracey Ivell, is the creator and writer of the “SollerWeb” website, read by thousands of people daily. It is an online resource aimed at English-speaking people where they publish a lot of up-to-date information on the different events happening in the village. “We wanted to give everyone the opportunity to see this fantastic, beautiful, diverse, quirky and fascinating area,” she says.

Roberts’s career in London led to the writing for the “Times” as a copy writer. Then came a career as the General Manager of a big city hotel for 15 years. After which, she started her own business specializing in real estate contracting . In addition at this time she had a long career in the magistracy, in the adult and family courts. She is currently a writer for the “Majorca Daily Bulletin” specialising in the Soller Valley and its stories.

Now her daily working life includes updating websites such as “SollerWeb” and “Humans of Mallorca”, writing for the Bulletin and participating on local radio stations. She conducts wedding ceremonies during the summer as a Wedding Celebrant . In her her free time she likes to sing a choir, walk, go to the Teatre Principal in Palma to enjoy the opera and she also likes flamenco.

Question.- Last week the United Kingdom’s Deputy Consul in the Balearic Islands, Lucy Gorman, came to Soller to talk about Brexit. What conclusions did the attendees draw?
Answer.- All the attendees had their personal questions and although the Deputy Consul was very good at explaining, she could not answer the sixty people there. We learned things we didn’t know about the health card and its validity in the UK for those who live in Spain but are British. We also learned that residents could use Spanish driving licenses in the UK.

Q.- And what about those British people who are semi-permanent residents in Soller?
A.- The residents were divided in two. There were people like me who have been here for a long time and they always live here.  Then there are others who own a house both in the UK and here. Therefore, the rules are different depending on whether you are a resident or not. People who live here semi-permanently, who we call ‘swallows’ in English, have more problems than those who are residents and have all their papers and documents in order. Their issues are mainly about taxes.

Q.- What about your maximum stay?
A.- If a Briton decides he does not want to be a resident of Spain and has a house here, in the future the rules will say that he cannot stay here for more than ninety days. That is, having spent this time, he must leave the country. But it will have to be out for another ninety days, not enough two weeks, for example. Therefore, during the year you can only come to your house in Sóller for two separate periods of three months.

Q.- Were you happy with the explanations given by the Deputy Consul?
A.- People were not completely happy because they received information they did not want to hear. The main reason is that there is still much that the British government has to decide. We are leaving the European Union next week but there will be a transition year where many issues will be decided.

Q. – Were there any outstanding issues?
A.- One of the problems was that some people had requested information elsewhere and it was contradictory to the Vice Consul’s explanations. However, it is noteworthy that Lucy Gorman gave an hour’s talk and then she and her assistant stayed at the Escolapies, where many people could ask questions. People, in that sense, were happy to have the opportunity to ask their concerns to someone who really knows the subject.

Q.- Does the departure of the United Kingdom from the European Union worry the British residents in the Valley?
A.- Not to people like me, registered residents who have all their roles in life and live here long term. But the rest of the British have to rush to update their documents. Everyone who has a house here or who lives here should be signed up with the local Town Hall.

Q.- What was the message of the British ambassador to Spain, Hugh Elliot?
A.- That all will be well and the rights will be protected for the British who are in Spain, as long as they are registered. There are 385 registered British in Soller, but we are convinced there are many more.

Q. – Did the British in Soller want Brexit?
A. Most British people I know of Soller did not want Brexit. I know very few people who were in favor. The people who come here consider themselves European. If a person thinks that the UK is the only place in the world, he will stay there and not live here. I think we are all disappointed with Brexit, but in democracy, if this is what most people want, we will have to make it work.

Q. – What requirements does a British person need to become a resident?
A.- It depends on the age of the person, but if for example a middle-aged person, one of the requirements requested by the authority is that they have enough money in the bank account to start a life here. You cannot come with less than 8,000 or 12,000 euros in the bank. You also need to have health insurance and put other papers in order, such as registration and tax related documents.

Q.- Will there be more talk about Brexit in Soller?
A. Yes. The Vice Consul will be re-arranging it in the future

Q. – Do you miss living in London personally?
A.- I love London and its theatre. I have many friends and family. In fact, my older granddaughter is there studying journalism. I visit London three to four times a year for a week and it gives me what I want. Then back home.

Q.- Is it considered sollerica?
A. Yes, although I am not very good with the Mallorquin language.

Q. – Finally, what words would I like to address to all Sollerics and Sollerics?

A.- Thank you for my life here. I consider Sóller my place in the universe.