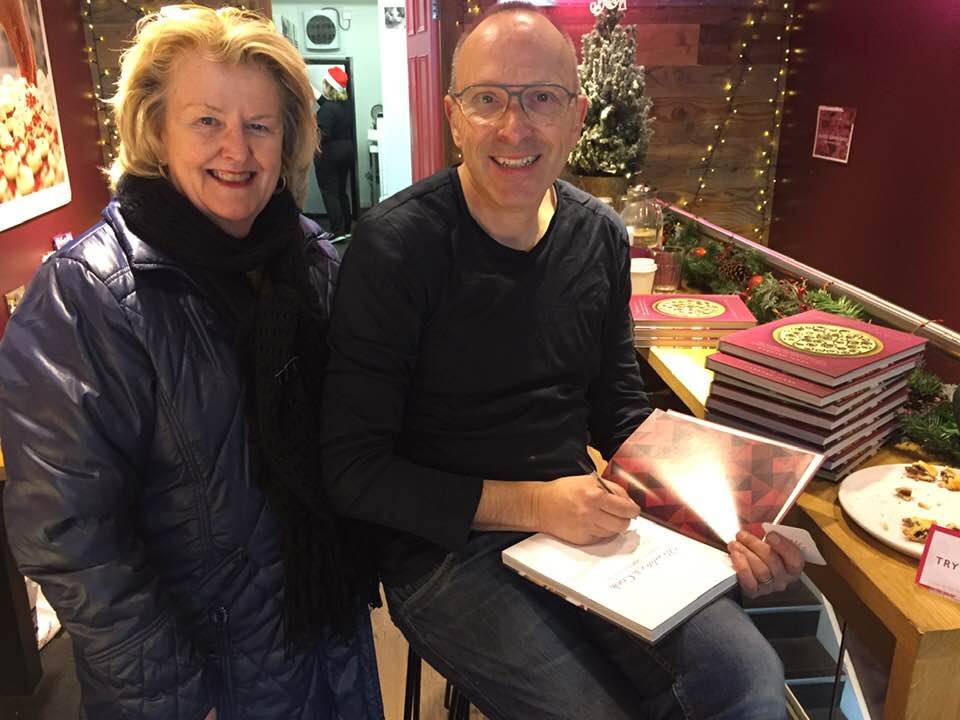 A trip to London and a coffee in Goodge Street, introduced me to whole new CAKE world. Christmas music played and a few guys up a ladder were putting up the decorations.  It was then I noticed the CAKE.  Beautiful cakes displayed in a refrigerated unit tempting us all.  But much as I was impressed by the incongruity of fine cake in a small café round the corner from Goodge Street station I knew there was a story there.

Sure enough when the decorations were twinkling a pile of books were put on the next table and the signings began.  Gerhard Jenne, cake maker to the stars was signing his beautiful cake book ready for a Christmas launch that day. He was also the man up the ladder and could probably put his hand to anything. We talked as he signed and it was obvious I was in the presence of the ‘cake whisperer’.

Gerhard Jenne grew up in Freiburg, Germany, licking the bowls and spoons after his mum had made her delicious Apfelkuchen. She must have been a fantastic cook because he was later inspired to train as a Konditor, or pastry chef, in Munich. That’s where he developed a taste – and a knack – for fine and indulgent cakes.

After qualifying, Gerhard moved to London and began working for society grocer and baker Justin de Blank, one of the pioneers of the foodie revolution. Here, Gerhard made a name for himself creating cakes for the rich and famous, including, amongst others, Tina Turner and the Rolling Stones.

In 1993, Gerhard came across a small bakery for sale on the corner of Cornwall Road in Waterloo – and so began Konditor & Cook. Waterloo was a different scene back in the 90s with the railway arches behind the store used by scrap metal merchants, car repairs, and scenery storage for ITV. They even used to have the set of Blind Date rattling past the shop front several times a week.

At the time, it felt as though the retail and food offerings were stuck in the past and Gerhard saw potential. Following the closure of the GLC at  County Hall, thousands of office workers lost their jobs and businesses lost customers. Yet, since then (mid-90s) the development of the Waterloo area has not stopped. The London Eye, Tate Modern, the extended Jubilee line, and the Eurostar Terminal have all brought people into the area. With retail and restaurants thriving they were in the right place at the right time.

The Waterloo shop is still going strong more than 25 years later. Along with a string of others from Goodge Street in the West End to Spitalfields in East London, Gray’s Inn Road in Bloomsbury to Borough Market south of the river.

After 25 years of spreading joy through cake, London’s favourite cake shop, Konditor & Cook is saying goodbye to Cook & its infamous sausage rolls & other savoury delights.  Now it is simply all about the spreading of joy through cake.

Konditor meaning baker in German aligns the company perfectly to its mission; to spread joy through cake. Gerhard’s vision for Konditor was that it would be a ‘democratic’ environment for people to come together, and that’s exactly what the Waterloo store created. Most of the original customers were office workers with a sprinkling of local residents, but soon the shop became filled with builders rubbing shoulders with fashion muses and Oscar winners – Ben Kingsley, Martin Childs and Jessica Lange all visited in one day!

Their Cornwall Road location allowed them to reach a new demographic, and bring two sides of the river together over a joint love of cake. Their mission was and remains simple – make someone’s day. Serve them a cake so good they’ll still be talking about it in a week. Make it feel like a delicious indulgence that will make them feel good about themselves or the friends and family they will be sharing the cake with. And then do exactly the same thing for everyone.

Sir Terence Conran, in his preface to the book described his first visit there.  He is Konditor’s biggest fan and has commissioned spectacular birthday cakes from them, often.

He says ‘Baking might be all the rage at the moment but this marvelous success story began many years ago on a charming little street in the Waterloo Conservation area. This was a shop that smelt deliciously of coffee, chocolate and caramel.  It was like entering a fairyland imagined by Hans Christian Anderson. Filled with the most wondrous cakes and pastries that not only looked magical but tasted divine too. I was hooked from the start’.

The book is intended to share the magic with cake lovers and bakers everywhere.  I came away with my signed copy and I am so looking forward to getting into the baking mode for the winter. It is called Konditor & Cook and available on Amazon.

The story was a fascination and the artistry involved in the cakes has to be seen to be believed. Local offices send in for their Brownie fixes of the day and all of a sudden the idea of a fine cake shop seems absolutely right.

Gerhard has visited us in Majorca and found the Soller Valley.  Deia, the Port of Soller and the City itself holds an attraction. A cluster of shops in London plus deliveries to the London area is the formula right now but, the right place at the right time, could be a temptation. ‘Konditor’ in Soller has a ring to it don’t you think? There is no doubt that the Majorcan world plus all the fine yachts looking for excellence in the cake world could be the magnet.

The pleasure of the meeting, plus my very special new recipe book, was a serendipity moment.  How lucky was I…