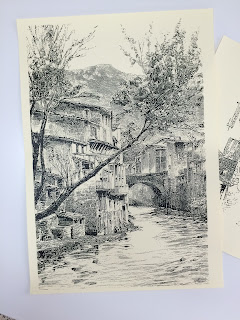 Early photographs of the Soller Valley are a source of endless fascination and we love to see the way we were. Soller was privileged to have the skill, talent and sheer inspiration of the famous architect Joan Rubio who lived and worked among us for fifteen years.  Rubio was a disciple and colleague of Antoni Gaudi and he worked with him on the design of the Sagrada Familia in Barcelona and also on the Cathedral of Palma.  In 1904 he designed the current façade of St Bartholomew Church, our Cathedral of the Mountains which sits in the heart of the City of Soller.  Our Church is Gaudi influenced but it is just one of a number of significant buildings in Soller and the surrounds which received his touch.  In 1912 he designed the Banco de Soller with its rounded balconies so emblematic of Gaudi’s work. The Church is overlooked by the Bank’s building and give two major works in our central square.  The visitors who come to Soller just to see these buildings and follow the steps that Rubio took are in their thousands each year.  Rubio is on the syllabus of many Architectural students and they take time to study right here in Soller. 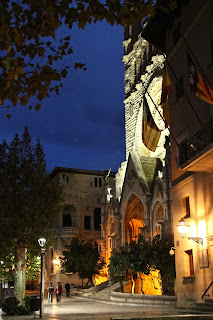 Other buildings which owe their look to Rubio are the Museum of Modern Art in the main street of the Lluna. Can Prunera is open year round to visitors and is a fine example of the time and place that Rubio worked in.  The Hotel L’Avenida is another spectacular example of the work of this prolific architect who gave us 15 of his best years before going back to Barcelona and Toledo to continue his work until he retired. 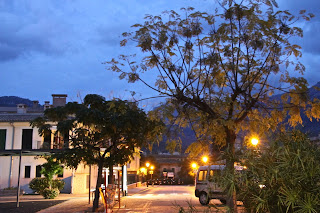 More recent decisions were taken on town planning when the Calatraves area of Soller was ready to be redesigned.  The demolition of many of the old factories of Soller from this site gave the planners of the time an opportunity to be visionary.  This land mass in the heart of Soller was envisaged as a true community incorporating all age groups and income levels.  The first area built was the largest underground car park in Soller.  The planners knew then that parking would be an issue in central Soller for ever.
From the giant hole in the ground that produced the car park a new village emerged.  Modern, comfortable apartments with tiny gardens and balconies appeared which many thought were not in keeping with Soller’s image at all. The City is full of old, charming buildings which have been restored to high specification homes and these apartments were a real shock.  Then the playground and parkland appeared with swings and a community café and the place began to buzz with the sound of children playing and teenagers using it as their meeting place. 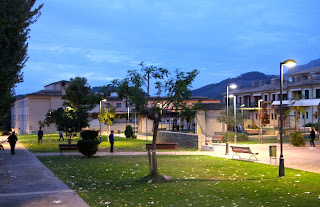 Meanwhile at the end of the park, alongside the Soller Tram line a new large building grew and grew.  This is the Bell Entorn building which houses the Home for the Elderly and a Day Nursery for young children.  The nursery is one of the favourites of the area and is well used and loved by local families.  Every day the lives of the youngest and the oldest in our community co exist.
This week it has been all change for the work with the elderly in Ball Entorn.  It was announced that the home will be full with an influx of new residents by the end of the year.
The organisation of this place has been complicated in the past because of the lack of cash to subsidise the fees for those that needed this facility.  The home has private customers who pay their own fees and they also have those who receive a subsidy from their local authorities on the Island.  I do not have all the facts about the complications that has caused but suffice it to say that they have all been resolved.  A new influx of residents is underway and the anticipation is that Bell Entorn is on its way to being fully occupied by the end of the year. This is great news for the area and for the dedicated staff and volunteers who help out there.
From the days where the influences of Gaudi and Rubio were evident in this place to the modern work under the name Calatraves there has been iconic design here. With the benefit of hindsight and history it is a great time to wander the streets of Soller to see where all this fits in to the 2016 landscape of this place.  It is a fascinating winter excursion and I do hope you will come and see all this for yourself.