Loading...
Skip to content
On top of the world at Can Topa
To meet Paula and Damian Murphy
By Shirley Roberts
Published in the Majorca Daily Bulletin
on Sunday 20th November 2016 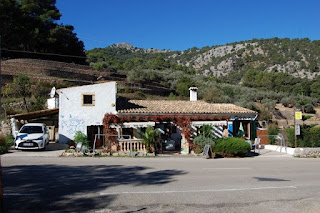 The Tramuntana mountains of the Soller Valley enclose the City in its heart.  The journey always begins with a decision to either go through the mountain and pay the toll or take the climb.  The Coll mountain stands at the entrance to Soller and was the one that was blasted through twenty years ago to create the Soller road tunnel.  The mountain road and all the history it represents is there for all to see.  Twenty years ago this was a busy thoroughfare and local Sollerics thought nothing of driving the 57 hairpin bend road to get to the main roads to Palma and beyond.  The mountain climbs 500 metres and twists and turns its way into Soller.  On the top of the mountain a couple of restaurants looked after the travellers as they stopped for coffee on their way to work and for something more substantial on their return.
These restaurants evolved from the staging posts of history when the road was a horse track and coach and horses were the only way out of the Valley.  These places were inns where horses and people rested before continuing their journeys in true wild west style. The restaurants on the top of the Coll have seen change and gone with the flow.
In 1997 the Soller Tunnel opened and overnight the trade at the top of the Coll ceased.  The Solleric delight in taking the tunnel has never wavered and there was no contest for the scenic route. The Coll had to reinvent itself and do it quickly before the centuries old watering holes were swallowed up into holiday home dreams.
The traditional Mallorquin restaurant of the Cas Mariner restaurant relocated themselves to new premises in the Port of Soller and their loyal clientele followed them from mountain top to sea front. The top of the Coll was now a new page waiting for the future to be written on it. 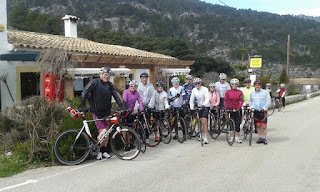 Today in 2016 the Coll is a road known the world over by the extreme sportspeople of the cycling world.  This a pace setting road and one that groups and individuals use to get into match fitness for competitions.  The famous people of the cycling world are frequent users of this space and the hobby cyclists arrive in their hundreds every day.  The general statistics show that this road is used by over 2000 cyclists a day in the main season between November and April.  The road is also used for car rallies and races and every year brings a new sport to the mountain.  Cars still make the drive and they park up so that people can enjoy the view, walk and take in the clear mountain air. 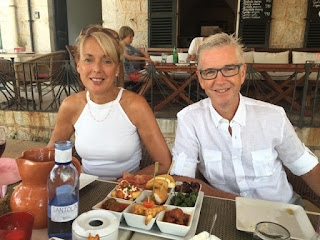 Let me now introduce you to the new kids on the block with their own ‘Place in the Sun’ story to tell.  Paula and Damian Murphy were living their family life in Northampton with Mallorca being a favoured holiday destination. They were at the stage in their lives when their children were making their own way in the world and leaving them with enough time to consider what they wanted to do with their future.  Paula and Damian are into running and cycling and they knew that an outdoor life in a great location would be high on their list of priorities.  Paula nursed a dream that one day she would own a tea shop and make cakes.  This was a far cry from her Systems Analyst career and days spent in front of a computer and not a baking oven.  Damian spent his Northampton days teaching others how to operate heavy machinery and he also fantasised about tea shops in the sun or maybe to start with a holiday home. 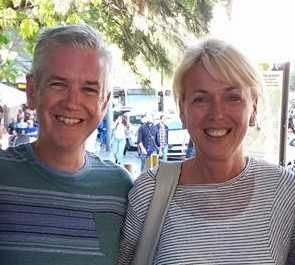 The internet was used by both of them to see what properties were currently available in Majorca and they came across an advert for a Café at the top of the Coll Mountain.  Paula and Damian knew parts of Majorca very well but had never been to the Soller Valley and didn’t know what to expect apart from what they read.  Bear in mind that at this stage they were not looking for a business but a holiday home.  They decided to be bold and take a trip to see this mountain café that seemed to be calling them from their computer screens.
The rest, as they say, is history. They took the journey with the Estate Agent and knew as they negotiated the hair pin bends that they were entering a very different world.  Just two houses on the top of the mountain and the only living creatures around were donkeys. Love, hit them both immediately and they knew that this was the place they could fulfil their ambitions.  No longer a holiday destination but a full life changing decision. It was back to Northampton to sell their house, give in their notice on their jobs and tell the children.  The time frame for all this to happen was very small and last February they arrived to take possession of their mountain retreat and café.  The cats came too at great cost and immediately went missing.  City life Northampton was a different world for them than exposed mountain top Soller.  Eventually they returned and are now the kings of all they survey and their urban lives seem far away.
The top of the Coll of Soller is always at least 5 degrees cooler than the Valley so the first shock in February was just how cold the nights were.  The roaring fires in the house were put to good use and the first guests arriving for hot chocolate and a warm by the stove were very welcome.  The next surprise was the sheer beauty of the night sky with no light pollution they viewed a sky they had never seen before.  The stars became their friends and the birds their frequent visitors.  The transition from urban Northampton to the magnificence of living on top of the world was an easy one to make and Paula and Damian were soon too busy to think about what they had done.
I caught up with them last week and we laughed at what a difference a few months have made.  They now know where they have moved to and they just love it.  Soller and the Port hold endless delight for them and they pinch themselves each day to believe that they really made the move and are getting on with their Soller lives.
Paula makes cakes every day and has a huge following for her special recipes.  The food for fuel for the sportspeople is what they do most of so energy bars are always in stock and plenty of liquid for rehydration.  Sometimes people arrive at the stop in bad shape after pushing themselves too far in the heat.  Some have been known to need a lift down the mountain because it has all become too much. Walkers often ask the times of the next bus only to be told that there is no bus that comes up this road.
The plans for next year are very exciting for Can Topa because they are going to do English Afternoon Teas.  Think cucumber sandwiches, homemade scones and cream and an endless supply of Paula’s cakes. This is at the end of a scenic climb up the mountain arriving in whatever way you like.  This is all going to start around Easter and is already being booked for groups who want to put this great experience on the tourist map.

Starting from November 2016 a Traditional Sunday Lunch is on the menu and yorkshire pudding on the mountain top overlooking Soller will be a reality.
Paula and Damian have changed places into our Soller world and are content.  Why don’t you take a drive up the Coll on a winters day and have a great trip.  Tea and cake English style waits for you at the top and two very happy incomers to our world who are looking forward to meeting you.