Loading...
Skip to content
Soller and the ‘Saint of Impossible Causes’…
Published in the Majorca Daily Bulletin
on Tuesday 8th November 2016
Photographs by Rachel Fox and Debra Reynolds 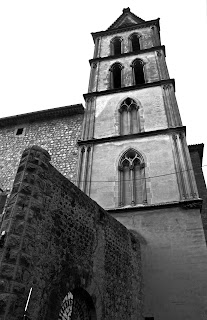 To learn about this place in the universe is such a pleasure.  No matter how long I have lived here and how many stories I unravel it all leads on to another. My nosy Solleric life is a journey of discovery and so it was this week when I was introduced to Rita. Rita has been doing good work for generations and hangs out in our Hospital church.  Did you know that Soller had such a place?  You could be forgiven if you didn’t know because this Church of the Sacred Heart, also known as the Hospital Church is on a side street off the Lluna which is the main shopping street of Soller.  It was rarely used except for its role on Ash Wednesdays at the beginning of Lent each year. This is when Mass begins in the Chapel and the Crucifix of the Blood of Christ, housed there throughout the year, is carried from the Chapel to Sant Bartomeu in Sóller’s main square. It is left here until His crucifixion on Good Friday. 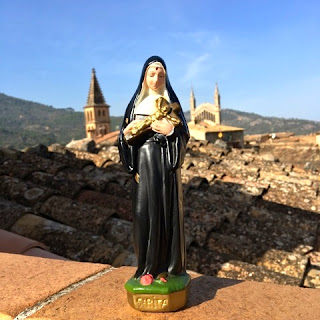 The powers that be have bowed to local pressure for this Church to be pulled back into regular use for the community and now it is to be used for Thursday evening services. This marks a new chapter in the life of the Hospital Chapel, which has played an important role in the history of Sóller. The Chapel was built by the people of Sóller to commemorate the victory after the Moors invaded the City on 11th May, 1561. A statue of The Mother of God of the Victory is kept here and plays an important part in The Firó, the reenactment of the battle that takes place here every year. 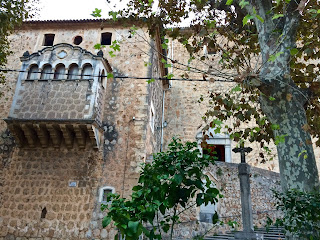 The Chapel is dedicated to Saint Rita. She is recognised for her remarkable qualities as a Christian woman and has been given the title of the ‘Patroness of Impossible Causes’. Her feast day is celebrated each year in the Chapel on 22nd May. Rita is known as the saint for abused wives and heartbroken women and she and St Jude are said to the ones that intercede for all impossible causes. It has been a matter of concern to some of the faithful of Soller that she doesn’t get the interest and veneration that she deserves.
The Church is also called the Hospital Chapel because there used to be a hospital/care home attached to it, which was run by nuns who did a wonderful job caring for the elderly and thus imitating the work of Saint Rita. For the people of Sóller, the Hospital Chapel holds much importance and the Church’s decision to open its doors on a more regular basis is greatly appreciated. Saint Rita’s work continues! 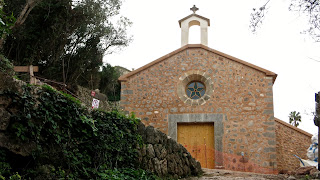 The Churches of the Soller Valley are all fascinating and very important to many local people. This year has been the first time in many years that the Capello de Castello has been able to be visited by many people. This was a largely derelict small church just off the Deia road on the walking route 221. Last year work was undertaken that proved controversial because the walking route 221 had to be suspended around the building work. Negotiations were tried with local landowners to allow walkers through their land for a temporary period till the works were finished. They were not happy and that didn’t happen. That is all in the past because the walking route is now open and the newly renovated Capella de Castello is a beautiful reminder of the chapels that are a feature of the mountains. In the highly religious community of the past it was difficult for people to get to church. A tradition of a few big houses getting together to create their own chapel grew and some remain and are a feature of the walks in the Tramuntana mountains. As the weather changes and makes exploring more comfortable it’s a great time to go on a Church visiting trail.   The two new ones just mentioned are important and the gothic Capelleta is a firm favourite for all those who have found it. You can find this gemon the road from Soller to Fornalutx where a right turn takes you to the gothic church of Sa Capelleta. This hidden gem is signposted Santa Maria de S’Olivar and you can drive down into a car park from the main road. The church is a fascinating example of bare knuckled building by local people who wanted their own local place of worship. The stalactites and stalagmites in the interior give it an eerie feel and the whole place is a delight. It was the favoured place of weddings by many Sollerics and these days there is an ecclesiastical training centre nearby (which is why there is such a good car park)
Do come and visit us soon and take a trip round our fascinating buildings which contain such history of this remarkable place and its saints.