The Hospital Chapel and the work of Saint Rita in Sóller 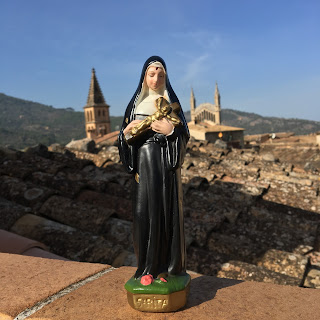 As Sollerweb reported earlier this week, as of Wednesday of this week, there has been a change in the Mass timetable at Sant Bartomeu in Sóller.  All weekday Masses (i.e. Monday-Saturday inclusive) will now be said at 7.30 p.m. and not 7.00 p.m.  Furthermore, each Thursday Mass will be said at the Hospital Chapel on Carrer de L’Hospici off Carrer de sa Luna unless there is a funeral when it will be said at Sant Bartomeu.
This marks a new chapter in the life of the Hospital Chapel, which has played an important role in the history of Sóller.  The Chapel was built by the people of Sóller to commemorate the victory after the Moors invaded the town on 11thMay, 1561.  A statue of The Mother of God of the Victory is kept here and plays an important part in The Firó, the reinactment of the battle that takes place here every year.
The Chapel is dedicated to Saint Rita (who is depicted in the photo above).  She is recognised for her remarkable qualities as a Christian woman and who has been given the title of the Patroness of Impossible Causes.  Her feast day is celebrated each year in the Chapel on 22ndMay.
It is called the Hospital Chapel because there used to be a hospital/care home attached to it, which was run by nuns who did a wonderful job caring for the elderly and thus imitating the work of Saint Rita.
The Chapel also plays an important role on Ash Wednesdays at the beginning of Lent each year.  Mass begins in the Chapel and the Crucifix of the Blood of Christ, housed there throughout the year, is carried from the Chapel to Sant Bartomeu in Sóller’s main square.  It is left here until His crucifixion on Good Friday.
For the people of Sóller, the Hospital Chapel holds much importance and the Church’s decision to open its doors on a more regular basis is greatly appreciated.  Saint Rita’s work continues!
Written by Debra Reynolds
Religious Affairs Correspondent and Sóller Resident