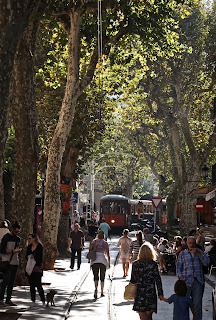 St Ursula has a lot to answer for but she gives us the Day of the Virgins in October and the bunuelas to eat for the winter.  Story has it that Ursula was so unlucky in her choice of love so gave it all up for virginity and sainthood.   She and 11,000 other virgins went on a pilgrimage and met a grizzly end. This day in our City is one marked by love struck young men carrying a rose and a guitar and singing under the window of their true love.  Mum and Dad are looking out of another upstairs window and if they think he will be suitable for their girl they invite him in.  Sweet wine and bunuelas are given to him and he has to explain his credentials to the future in laws.
This year in Soller the Town Hall steps was given over to industrial vats of hot oil and bunuela cooking.  These tasty mini donuts are made from potato flour and fried in very hot fat and then sprinkled with sugar.  The hole in the middle has an earthy significance. The microphone was alongside the cooking so that the boys could sing their love songs. So for two hours romance and the smell of hot oil assailed us in Soller square.  Tradition has it that weddings are fixed in November and churches booked before the tourist season gets underway again.  This is time for the local people to catch up on their lives and weddings are at the top of the list. 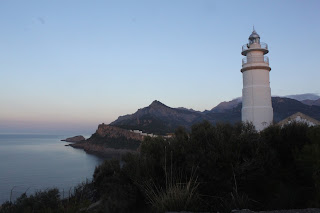 Change and renovation is the main theme of November and no more so than in the Port of Soller.  The gentrification of the whole place has two undeveloped remaining areas and they are now under the spotlight.  The Marina end of the Port of Soller, past the fishing fleet and almost out to sea is about to get the beginnings of the promised refurbishment. The fishermen are the beneficiaries of the first phase as a new Fish Market is to be built right there.  This building will also house the refrigeration unit for the fish and the sales areas for commercial and individual purchases. The architect outlined his plans at a meeting in the Port last week and now everyone knows that this development is on its way.  The rest of the plans for the area are being rolled out gradually and are far more controversial that the fish Market. 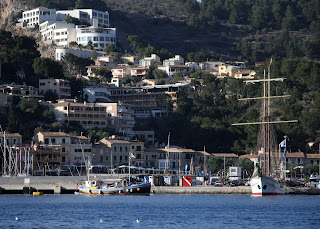 The Moll of the Port of Soller is a blank space which has been developed into a pop up bar and a venue for live music.  We all knew that this was temporary until the developers decided the plans but we’ve grown to like it. The idea of Port Adriano mark 2 being rolled out in the Port of Soller is not finding too much favour.  The stories of high end shopping and expensive brand labels being sold from this area is a step too far in the mind-set. The argument against this is that shopping is a feature of life when you arrive on an expensive yacht or stay in the most expensive hotels in Spain.  The Soller Valley has a few establishments that fit these criteria and they are said to be the lobbyists for a more expensive shopping choice.
Meanwhile right round the other end of the Port of Soller is the rough bit where the Repic Beach turns shingle and looks a bit unloved.
As the perfect horseshoe bay of the Port of Soller becomes more beautiful this area is the thorn in the side.  The neglect of the area is now under the spotlight and there is a plan for full gentrification including new sands and smart infrastructure. At this rate by 2018 the works will be largely done and the new Port of Soller will be ready for its brilliant future.   In the meantime, those here who would rather that change did not happen sit sadly and contemplate. Sophisticated travellers and local residents can see the charm of no changes but also the many advantages and pleasures that fulfilling the potential can have.
The Soller Valley is in the spotlight and this week’s award to Fornalutx illustrated that it is not just the coastline that people love. Fornalutx will be represented big time at the up and coming Travel Trade Fairs as befits its status as the only village in the Balearics to become part of the network of the most beautiful villages in Spain.  Fornalutx is the only village in the Balearic Islands to be awarded this title at this time. Fornalutx was once a small local hamlet in a glorious location.  The decision makers worked hard at the image and this award is the result of years of planning and labour.
As November kicks off the decision makers of the Port of Soller must be hoping that their work will one day be appreciated too.  In the meantime, lets just enjoy a bit of November romance.