Soller is not closed – yet…

As the season changes and the colours of autumn dominate our mountains and valleys there is a danger in thinking that everything is closed. For some parts of Majorca that is true and resorts resemble ghost towns but that is not true of the North West coast of Majorca in the Soller Valley. For another couple of weeks – until the end of November at least – ten hotels remain open and a sprinkling of good restaurants. The local bars and restaurants who cater year round for locals and visitors never close apart from their regulation two-week holiday twice a year. The laws on holidays are very strictly enforced here and many establishments close down for the required weeks and all the staff have a holiday at the same time. The reason the Valley stays open is because it is a working place with many reasons for visitors. In my opinion Soller is second only to Palma in this regard as it is a City that is no longer seasonal but has Hotels open year round to welcome all. The events calendar speaks volumes about why we are still busy here and the shops are doing a roaring trade. 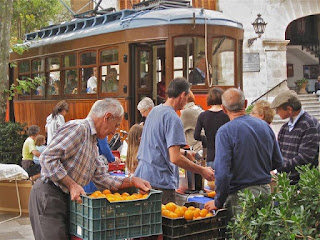 Take this coming week in the life of Soller and it will give you an idea of what I mean. Our events calendar shows the daily happenings from Show Cooking the Majorcan bread making tradition to Line Dancing but it is at the weekend it all really kicks off. The celebration to honour the Patron Saint of Music – Saint Cecilia includes a benefit concert to raise money for the refugee effort of Soller. Our City is one of the host venues for the Syrian refugees expected here soon. All the music and dance groups of Soller plus some very fine soloists who live here have all agreed to give their time to this magnificent concert. It takes place on Saturday 14th November in the Convent Church of the Sacred Heart at 7.30 pm. This is a fabulous venue big enough to seat the vast crowd that will turn out for this event. We all love music in all its forms here in Soller and we are happy to revere Saint Cecilia. No charge for this concert but donations to the Refugee fund are anticipated. 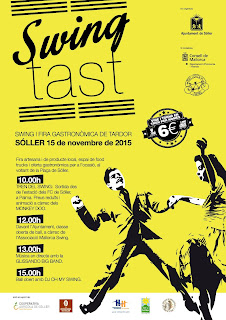 On Sunday 15th November 2015 all roads, trains and trams lead to Soller City centre for a SWING festival. Swing music, the big band sound and a lot of dancing is the order of the day. The Soller train has a special price and itinerary to get people here and the place will be rocking. The weather forecast is great and we are looking forward to a great fun day in the open air in the middle of November. Swing music groups from Majorca and many other places are on their way here to make this a day to remember. Meanwhile the winter work of reforming and renovation has begun. We watched in awe as the cranes were erected on the Repic beach to lift all the new shower cubicles into the new hotel that is being built there. The Hotel Minister is due to open in the spring next year and the build programme is currently on schedule. The spectator sport of seeing this project emerge into a new phase every few days is occupying a group of the retired of Soller right now. That together with the frequent film production companies that turn up and this group have their winter entertainment sorted. 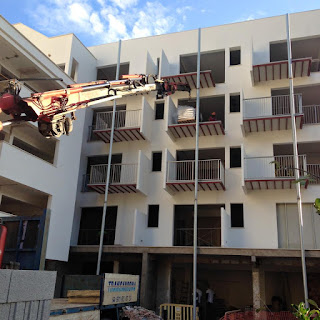 Christmas has already arrived in some of the shops in the main street of the Luna in central Soller. The decorations in the very French Castanyer shop just of the main street are very beautiful. We have new shops springing up everywhere and the notion that Soller is a serious shopping destination is now taking off. The latest arrival is the Cabot Concept Store which has opened its second shop on the Island in Soller. It started its flurry of excitement in Palma and now has done the same in Soller. I love the idea of a ‘concept’ store because it’s a great excuse to sell whatever takes the buyers fancy. The Soller store has beautiful sinks alongside clothes, gift ideas and plumbing. All very conceptual I’m sure. Soller is on the cruise ships day trip circuit and this weekend we have welcomed hundreds who were off the cruise ships docked in Palma. They arrived in Soller and the Port wearing their badges that identified which ship they were on. What a glorious visit they had with Soller looking so beautiful in the autumn sunshine. There has never been a better November to go cruising and we were delighted to welcome them in this, the season that is going on and on.