news from the Soller Valley

Published in the Majorca Daily Bulletin
Tuesday 24th November 2015
Photographs by Rachel Fox
This week the news from Soller includes a fallen tree, new life for our museum, Christmas decorations and weather.  I am an avid reader of local papers and news sources.  I know far too much about what is going on in the world and sometimes my brain says enough. The past few days have been a case in point and I resolved to centre myself right here and check out out our little Soller world which I am pleased to share with you. 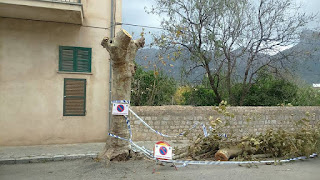 The high winds of Saturday brought fallen trees and leaves scurrying across the roads.  The rain battered us for a while and Soller’s Saturday market closed up early due to weather and lack of souls on the street.  In the L’horta district between City and Port a tree toppled precariously and the fire brigade was alerted to sort the problem.  Burly firemen with ladders and chain saws sorted the tree and provided the mornings entertainment for the street. This was considered newsworthy enough to hit our local papers front page and that gave me real pleasure.  It would be great to envisage a world where these small happenings were the only news. 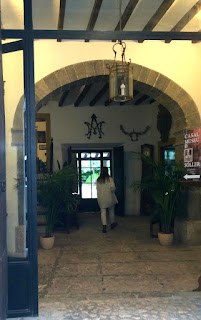 The Museum of Soller has reopened after a sort of closure over the past two years.  I say sort of because the Museum of Soller shares its space with the Maria Mayol Colum Foundation and the building has been used for their meetings and concerts in that closure period.  Anyway now this is all changing, from this week the Museum will be open six days a week with a shut down on Sunday.  The Museum is situated on the Calle Del Mar – at the top end near the Post Office.  It is an unprepossessing town house at street level and easy to miss but it does exist.  Sometimes a flag is blowing outside to direct you there. 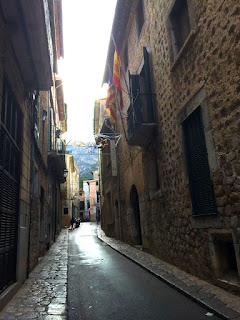 The Museum is an exciting glimpse into the many stories of the past in Soller. The staff there know all about the migration stories, the tales of Vicar Fuquet the Matchmaker of Soller, the industrial past and much more.  I am fascinated by what I learn there and much of it has found its way into this column and the pages of other magazines.  The Museum will be closed for decoration and updating of exhibits in January and February 2016 but right now, till the end of the year, it is open.
The men from the Town Hall have been busy putting up the Christmas Lights in the the streets in the centre of Soller.  This is for the Christmas ‘switch on’ which takes place on Friday 4th December.  After that Soller goes into its home grown decorations mode and on the 5th, 6th & 7th December there are classes to make decorations and hang them in the City Centre.  The focus of this activity is the fountain square where the trees are going to get a Christmas make over.  Everyone is welcome to join in this activity and contribute to making Soller’s Christmas local and meaningful.
The Ferrocarril of Soller is the organisation that runs the Soller Train and Tram.  They are the biggest employer of the area and many local people own a slice of them.  Their families invested in the train 100 years ago when it was a great idea that the government wouldn’t fund.  Sollerics dug deep and raised the money for this and over the years they have shared the highs and lows of its fortunes.  Right now they are proud to be part of the Unicef appeal to feed hungry children.  The takings from the Train this weekend were given as  a donation to Unicef for this work. 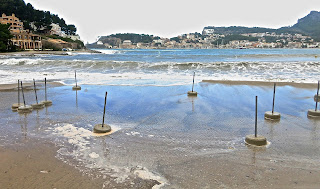 The Soller Valley is moving into winter now with the rest of Majorca.  As a mountain valley we experience a micro climate that can cause us to be much colder than the rest of the island once the sun goes down.  We even get ice hazard warnings in our cars when we drive up towards the Soller Tunnel or on the road to Deia. As we emerge blinking into the Palma side of things we look like the mountain hill billies with our thick coats and jumpers on.  Sollerics don’t mind being different indeed its all part of our persona. Proud to be from the Soller Valley – that’s us…
This is the news this week from Soller  which is a glimpse into small town life in this little City with a big, eccentric heart.