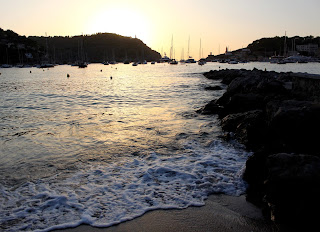 Have you ever heard ‘the Sound of Silence’ sung in Mallorquin?  It is a feature of a beautiful celebration here in the Soller Valley and it brings a lump to the throat every time.  Soller is deep in Fiesta land in August and we are delighted to share them with visitors, holiday makers and people who find us by accident.  The fiestas are all very important local times and not part of any theme park spectacle.  The Mass in the church of Biniariax starts its three day Fiesta with a ceremony to honour the elderly of the village.  A roll of honour is called of those who have achieved great age and they are presented with gifts from the town council including the Ensaimada to share with their family. The service ends with the haunting Simon and Garfunkel song and many reflective tears.  The large ensaimada is significant because it has been for generations the party dish usually dipped in hot chocolate and brought out like this for special events like weddings, christenings and celebrations. This event takes place in the Church in Biniaraix on Saturday 15th August in the morning. 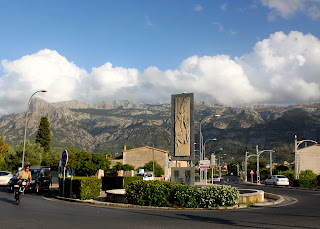 The new administration in Soller is getting very busy and for the first time in years the Sant Bartholomew Fiesta programme has been printed in advance and is available online.  So far so good except that the print is so small no-one can read it. My Tourist Information Colleagues were so proud of being ahead of the game for once but the print let them down.  I am assured that the paper version of the programme will be available from today so all will be well. The Fiesta is between 20th and 24th August with many pre -events starting on the 15th August at the Night of the Art. This is the time that our new politicians will be in evidence.  This fiesta is the most significant one of the year for local people and so many things happen in fiesta week.  Meetings are held, business is conducted and behind the scenes decisions are made.  It marks the moment when the business cranks up again after the August shut down and serious work begins again in September. 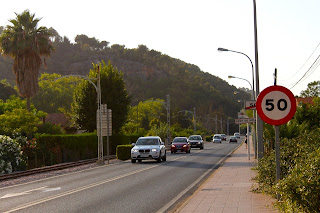 The new speed sign was erected this week in the stretch of road that leads from the monument roundabout down to the sea.  The speed has been reduced on that stretch to 50 in place of the 70 that was considered so lethal.  This has been a long time in the planning stage and local people are delighted that their voices have been heard.  Another traffic hot spot is all to do with the third world bus stop in the Port of Soller .  This was created on the roundabout a few years ago and shade for both sun and rain had been promised.  Photographs of tourists suffering from no sunshade hit the local papers with monotonous regularity.  This week it was announced that there would be no shelters because the bus stop was going to be moved.  It was considered to be too far out of the Port and generally not satisfactory.  There has been no announcement yet as to where the new site will be but the people of the Repic beach are hoping it is going to a lot nearer to them than the current one is.
The restaurants are very busy in Soller and the Port right now with the place at its August maximum.  This has made us go off centre in search of lunch with hungry children, straight out of Summer School, in tow.  They pulled me in the direction of Bar Stop which is a very unassuming place on the main road because my grandchildren had heard about the delicacy that was only served there that they wanted to try.  Hot baguette, infused with olive oil and salt and covered in the fresh squeezing of the ramalette tomatoes.   This was the dish of choice and it was wonderful in both its taste and simplicity.  Forget the burgers and pastas just bread and tomatoes hit the spot for our crew this week. 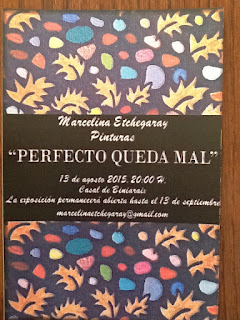 This is a week of such pleasure in the Soller Valley with the eagerly awaited Marcelina Etchegarry Exhibition in the Casal De Biniaraix.  The Nit of the Art on Saturday with all the exhibition openings and music to dance the night away .  Add the Sunday Summer concert in the Museum of the Sea and the hundred other live music events all over the Port.  It is no wonder that when people arrive here they hardly want to leave – there is just so much happening in our small world. Something for everyone is to be found in the Soller Valley this August.  Look forward to seeing you here very soon.