Enter Lynne Franks world on the road to Deya via a three point turn conducted on the main road of the mountain.  Stress enough before the climb to the 12th century monastery that marks her place in Valley.  The home now of Bloom Retreats and a very chilled Lynne Franks ready to give me some of her precious time and special energy.  Everyone knows Lynne Franks, she is an iconic child of our generation  The lady that made the PR world an art form under the auspices of Lynne Franks PR. She created the legendary London Fashion Week, launched designer jeans and introduced Swatch Watches.  All this done while working alongside the most important environmental and human rights issues of our time.  The indefatigable aura that surrounds Lynne is the mask I wanted to get behind because I know that this legend has a heart and a story.

Lynne’s early life helping in her fathers butchers shop in North London  connected her with the community. She reflects that it is  the love of people and all their stories that have been the thread that has inspired her work.  Early days of typing pool after leaving school at sixteen led to an ambition towards journalism and then to the heady world of magazine publication in London.  No college or university but straight into the world of work that was available in the 1970’s. 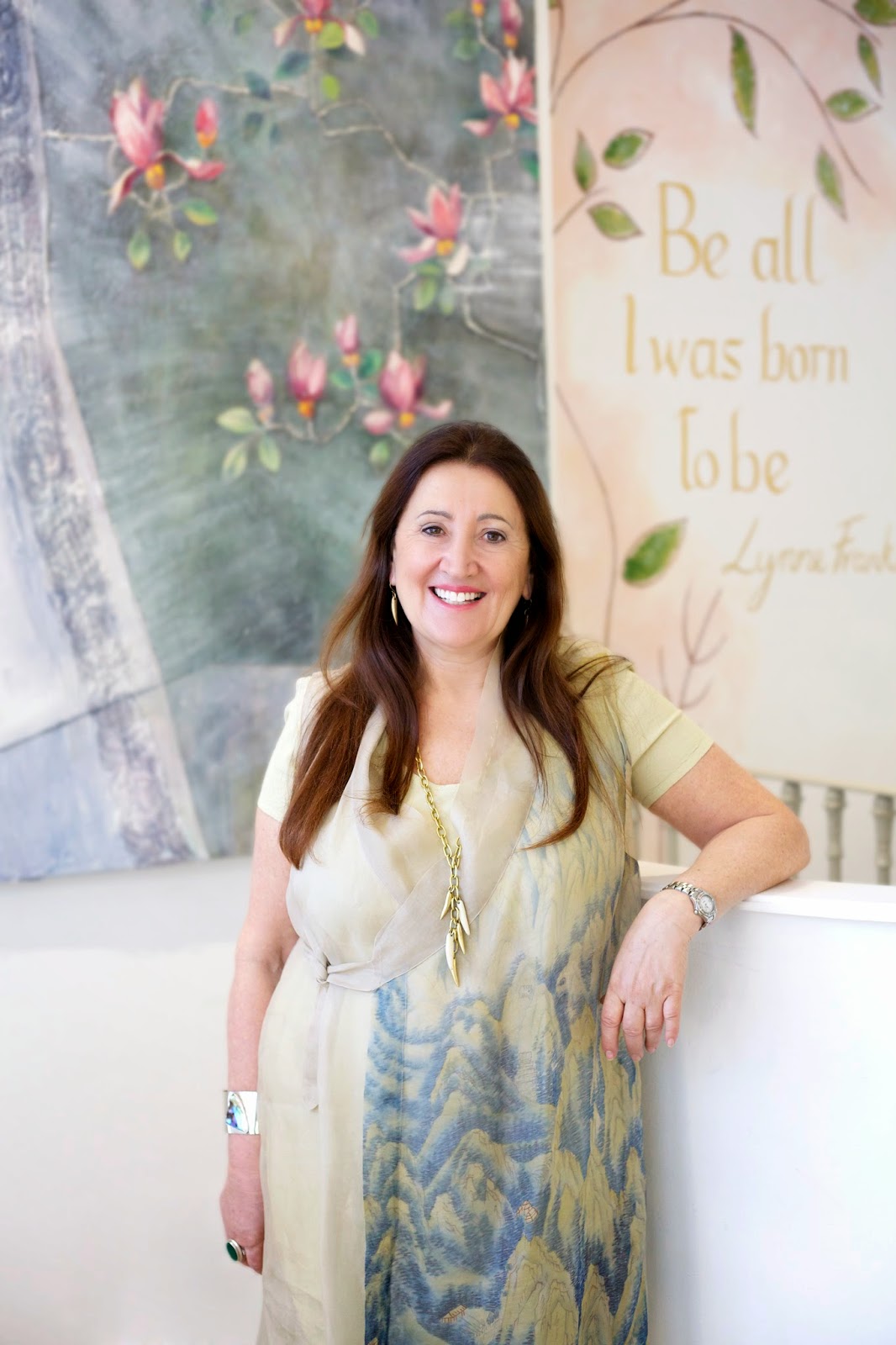 As a child of the ’60s Lynne grew up with many of the expectations of a woman of her generation.  She took it for granted that she would have a career, children and a secure marriage.  Starting her working life at sixteen meant that by age twenty-one she was ready to take all the chances of youth and  six years work experience and with encouragement of the fashion designer Katherine Hamnett to  fly with her own PR Agency.  This was to be her very exciting life for 23 years and everything in it was new, fun and it happened just as the world was ready for PR and all that it meant.  So that was work sorted, the marriage and children happened too and she is so proud of her two children Jessica and Joshua.  The game plan had worked and at the age of 44 it was time to take a little time out and decide on the next phase of her life.

‘Lets go to Majorca and see what our friends like so much about it.’  ‘Why has Katherine Hamnett got a place in Fornalutx?’  ‘Lets take a car and go and visit a few places’.  These were the conversations that Lynne and her husband had and what eventually brought them to Majorca for the first time.  To say that Lynne fell in love with the Island is an understatement – she was entranced.  Lynne had travelled the world many time over before she came to Majorca on that holiday and knew once she got into the Soller Valley that she had found her place in the universe.   The mountain road to Deya from Soller was the journey home for her and she set about finding a house right there in which to live.

Life happens and the exciting new world that was theirs for the taking with a little money in their pockets from selling the PR business fell apart. The marriage ended very suddenly and Lynne Franks was alone in Majorca with two teenage children and a new chapter of her life beginning with no rule book. She had left a world employing fifty of the brightest and best brains in PR, where she was the queen bee having ideas by the score every five minutes.  A staff whose function it was to research and develop any cause or subject she wanted – for this life in Deya. What to do now Lynne?

It took her three years to pull herself from the whirling dervish that her life became at that time.  Frenzied excitement, making the house in Deya her home, connecting with the community and then flying off in search of a new truth or aspect of religion.  Her soul and body were on their own journey in that time and the next manifestation of Lynne Franks was waiting in the wings of the confusion.

Deya welcomed her back from her journey of self discovery and its mountains enfolded her like they have done to many generations before.  The good energy and beauty all around were the balm for a troubled soul.  After having a teenage angst competition with her children  with none of them knowing who was the most outrageous teenager of the group. Lynne grew up and became Mum again and let the scales fall from her eyes.   So many causes to get involved with, so many women to assist on their journey of self discovery, so many human rights issues that needed her.  In addition to this she needed to earn a living just like the majority of the population.  Divorce settlements and problems meant that there was no happy ending in a castle on a hill with a bucket of gold at the door.

Lynnes’ journey back to the next stage of her career began with the launch of a woman’s radio station in London which she became the chairperson of.  This whole experience is now what she regards as the missing link in her life.  It brought her into contact with many different women’s organisations and high profile female leaders from a multitude of different disciplines.  She presented her own weekly show called ‘Frankly Speaking’ where feminists and activists of the time were interviewed.  Lynne had always regarded herself as a feminist before but now fully understood what it meant.  Through the people that she met and her own developing consciousness of the role of women in society she knew that women’s issues would now occupy the rest of her life.  She learned of the difficulties that so many women face all over the world and knew that even without getting paid she would have to join the cause and help in whatever way she could.

Lynne had the idea of a celebratory conference and concert called ‘What Women Want’ just prior to the United Nations fourth World Conference on Women in Beijing in August 1995.  A leap of faith into the world of a wing, a prayer and contacts created the first major women’s event ever held in Britain.  With the help of an assistant, teenage daughter Jessica, some great friends including Anita Roddick and a couple of sympathetic commercial sponsors they succeeded .  They featured workshops and discussions on a wide range of topics from technology, natural health, domestic violence to consumer power and sexuality.  Exhibitions and performances were held in the South Bank Centre, inside and outside the Festival Hall by female artists, musicians.street performers and alternative health therapists.  Women learned how to use the internet, how to dance, how to sing and it became the largest street party of its time.  The concert to finish off the event contained an eclectic mix of disciplines and performers from the spirituality of the Brigidine sisters, an order of Irish nuns who started the concert of female artists with a prayer.  Germaine Greer read a speech and music came from many wonderful performers including Chrissie Hynde and Sinead O’Connor.

The female warrior was back and going to lead from the front raising awareness of women’s issues and causes worldwide.  The high profile of ‘What Women Want’ resulted in invitations to speak all over the world.  To lead focus groups and discussions for business and government and to be embraced by the wider society as a spokesperson for women.  Lynne had accomplished her desire to get back on the ladder of life and become a contributor again.

Lynne is bringing women to Majorca – she is a one woman tourist board.  She wants Majorca to be the hub of the world for bringing together high powered women from  governments and industries worldwide.  Her concept is that women sharing information and spending time together brings nothing but good to their causes.  She has proved this in the BLOOM RETREATS that she holds at her home in Deia.  The idea of the retreat is to nurture, inspire and empower the whole woman.  Many of the women who have attended such courses have formed business and collaborative ventures with others they met who were on the same journey and used Lynnes’ world in Deia to find it.  Lynne herself contributes to the courses but they are led by an exceptional team of wellness

experts, renowned artists and international teachers.  Creative writing was one of the subjects on offer at this weeks course.  All this taking place in a an idyllic part of the Deya mountainside with chill out spaces for rest and relaxation, fruit trees to pick from if you are peckish and a choice of two swimming pools and a hot tub!

Lynne is a grandmother of five and is proud of her role as a ‘grandmother warrior’. She has every respect for the indigenous grandmother movement  of the world who have come together to lobby for world peace to create a better future for the next seven generations.  It was the Dali Llama who recently said that the worlds problems would be solved by the ‘Women of the Western World’ Lynne is the embodiment of this principle because when she gets hold of a worthwhile cause she has to see it through.  Two weeks ago a portrait of Lynne Franks was hung in the National Portrait Gallery in London as one of four portraits from the exhibition of the ‘100 leading ladies of our time.’ She is recorded here as the  ‘Legendary PR Guru’ and ‘Women’s Empowerment Activist’.

Lynne has no plans to retire in fact she is so energised by the retreats and International Women’s Conferences she wants to bring to Majorca that there is simply no stopping the woman.  Her life and connection with Deya and the rest of the Island is what gives her the motivation to go on.  She is totally at peace and at home here and doesn’t see that changing any time soon.  Deya is her rock and her place that opened the chapter for the second stage of her creative life.  The days of wonderful parties with live music and dancing with fabulous friends round the Deia pool may not be so frequent but life with a capital L still goes on for Lynne Franks – one special lady.