The drums were the first possessions  that arrived in Soller when this couples relocation brought them to the Hidden Valley.  Native New Yorkers with a dream to find the perfect place for the explosion of art and music in their lives.  A couple of Art Student kids who met at the famous  ‘Art Students League of New York’.  This is an Art School with a difference, based in central New York on West 57th Street.
For over 130 years it has had a tradition of offering reasonably priced classes on a flexible basis to students rich and poor.  This is an informal Art School with no degree structure or exams.  It is considered by many to be the finest Art School in the U.S.A and has produced some legends in the Art world.

Janet and Ned are artists and they fell in love among the canvas and paint of that school and got married very young.  Ned at age twenty-one surprised his parents by getting married and deciding that his future was going to be drums, art and Janet – not necessarily in that order.  Janet is an artist trained in the Academic Technique. This is a style of painting produced under the influence of European Academies of Art particularly the French Beaux- Art movement with its emphasis on Neoclassicism and Romanticism.   Her leanings are towards the influences of  Jean-Leon Gerome a French academic painter whose works were largely based on history, orientalism and mythology. If you go to the Hotel Casablanca in Times Square today you will find a huge mural in the foyer of Casablanca at the time of the film.  A huge work which took months to complete.  The artist – Janet Brewster.

Janet paints, it is her life, her job and  her vocation.  She loves to paint portraits, still life and wonderful scenery.  She is inspired by the elements and the human body and there is much evidence of  flesh in her studio including a full length nude of Ned!  Her career has taken her to many European cities to paint commissions and each trip brought her closer to finding a new route for her creativity.  Was it going to be  France – the natural home of so many painters or Spain?  Meanwhile while this decision making process was being played out Ned was back in New York playing every venue in the city.  He would describe his style of musicianship as Hardcore, Bohemian and Grungy at the time. For ten years he was the drummer with The Senders and if any of you can find in your record collections music by the Action Swingers, Blind Roaches and Fat Vultures,Raging Slab, False Prophet on the Dead Kennedy’s label – Alternative Tentacles – you will find his name on the record sleeve.  Ned is also a skilled cartoonist and the New York days were filled with art and the nights with music.

Family invitations from cousins to visit on the Island of Ibiza were what brought this couple to the Balearic Islands.  They had yearnings for change and a different stage for their creativity. They had fallen in love with Spain and were contemplating a  life there when friends from Madrid introduced  them to Soller.  Sometimes Soller grabs you by the gut and pulls you in and that is exactly their experience.  The light, the mountains, the coastline and the ruggedness of the North West Coast of Majorca were elemental in their decision.  The respect that local people had for art and music was the clincher.  They knew after short acquaintance that everything they represented was appreciated in the Soller Valley.  So seven years ago they left New York,the place that many young Spanish would love to live and headed for down town Soller.

The drums were the first of their belongings to arrive together with twenty five boxes of records, forty boxes of books, easels and a sofa.  That was their start in  the building on the Calle Lluna which houses the Brewster Gallery.  This is where Janet  and Ned live and work and it is in the heart of the community of the people they respect.  The shop front houses all Janet’s work including postcards of all her paintings.  The still life paintings of the Soller Lemons are often bought by visitors as a memento of their holidays here.  The Back room is the Art Studio where Janet works with local models and sometimes from photographs  in the tradition of the academic artist.  The studio is also a classroom where Janet teaches art to interested local people and short courses for holiday makers.
Ned and his drums edged themselves warily into the music of the City of Soller. He felt a little afraid to march in as an American with his drums and offer to play.

Not long after they arrived in Soller  Ned and Janet attended the Sant Bartholomew Fiesta in Soller and watched the demons, the fire run and the heady beat of the drums.  He knew that he wanted to join that group – it was his natural home.  The Esclatabutzes who are the local ‘Demon Group’ of Soller welcomed him in to their ranks once they heard him play and these days Ned is a valued member of the organisation.  He was part of the demonstration against the EU directive that wanted to cancel the Fire Runs of Spain because of Health and Safety issues.  He joined with the Escalatabutzes and all the other Demon Troops in Majorca and marched in protest in Palma.  He is glad to report that a compromise was reached and now the Fire Runs can exist as long as all the members of the groups pass a ‘fire management’ exam.

The acceptance by this group gave Ned a visible presence locally and now he plays in three local groups and one in Deia.  His music stretches from Rock and Roll to Jazz with the presence of the demon music never far away.  He teaches others to play the drums and is particularly excited about some young members of the group in Soller who are on their way to being outstanding.  The music that started warily because he was an outsider proved to be the introduction to the musicians of the valley who were only to glad to embrace his talent.  Ned’s cartooning skills make him the designer of interesting logos for tee shirts which they also sell at the Brewster Gallery.  So  the gallery, cartooning and music define his life here just as it did in New York.

Janet and Ned are integrators who have worked hard at learning the language both Spanish and Mallorquin.  They work with other artists and musicians who are local and have found that the ability to communicate is crucial.  They also live by the maxim that work opens doors.  They know in the self employed world it is all too easy to get overwhelmed by the need to pay your bills without a regular pay check.  This just inspires them to work even harder and be open to the opportunities that come their way.  One of the key things about living in the Soller Valley for them is the good energy  here which inspires their work and in turn their life – the two are intertwined.

Janet and Ned’s ambition is to continue the life they love in the Soller Valley and just get better at everything they do.  They go back to the US every year to visit family and recharge their batteries off island but they are always glad to be back in the Valley working hard amongst their people.  They just know that they have landed in the right place for them and feel very blessed. 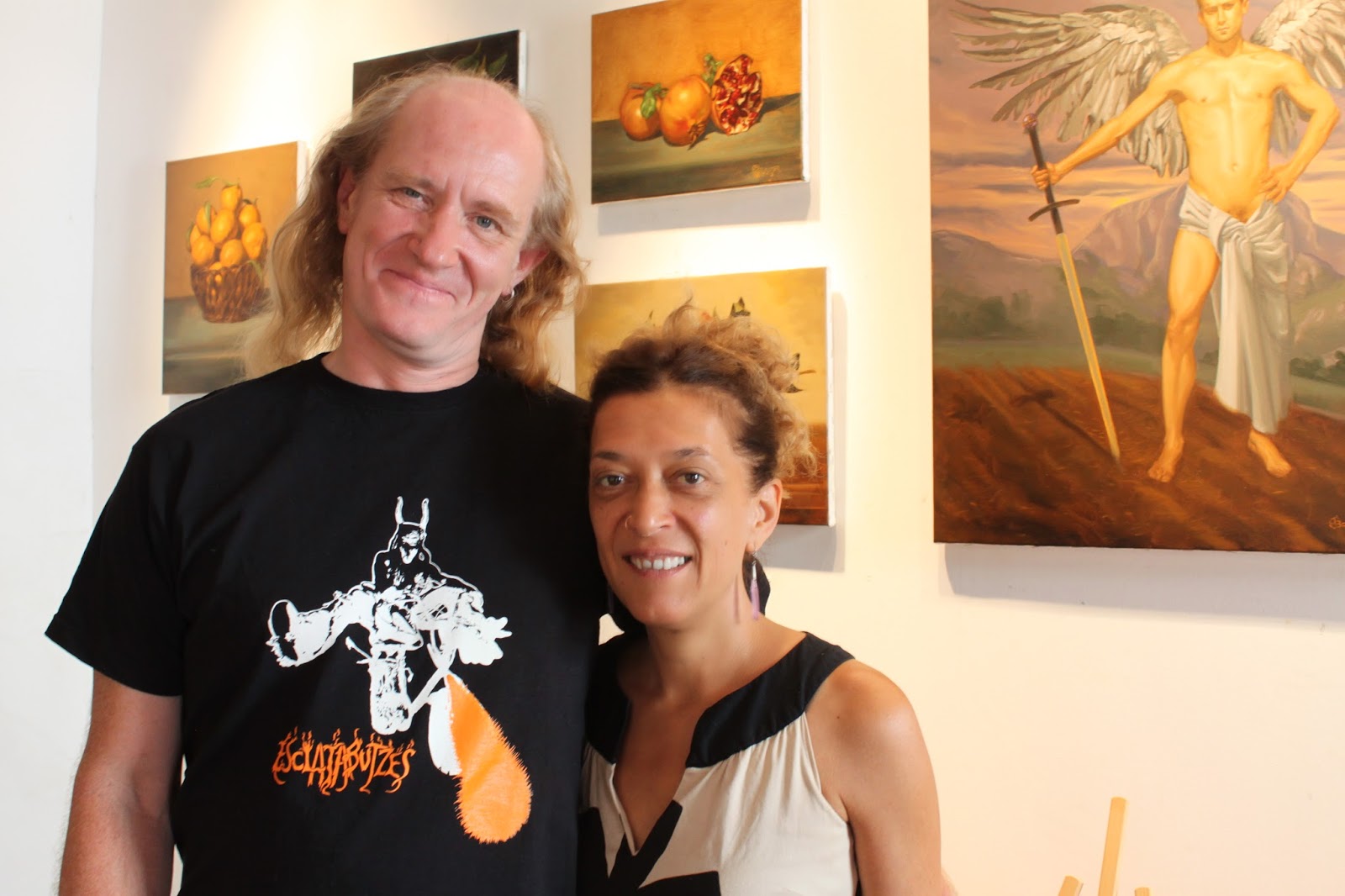