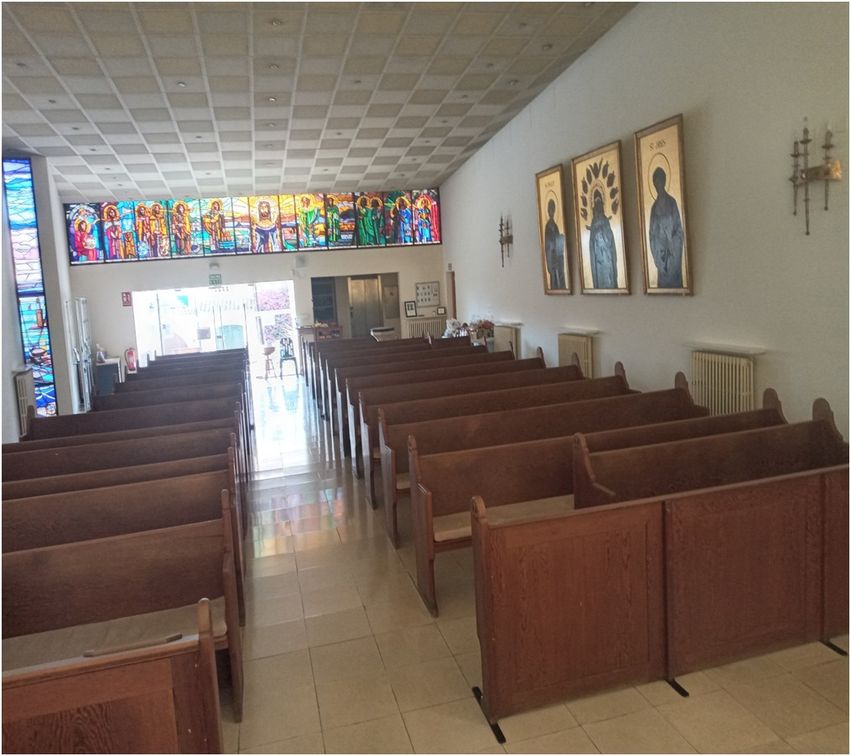 Written by Gillian Garden a member of the congregation  – June 2022

The first Anglican congregation in Mallorca was founded in Alcudia in the 1860s by Robert Bateman, the director of a British company draining the marshes there. It did not continue after his death but was restarted in the Terreno area of Palma in the 1920s as most of the British residents lived in that area. In 1934 an old soda water factory was rented and fitted out as a church. An Anglican chaplain came over from Barcelona whenever possible to hold services.

The following year Civil War broke out and the church was closed for the duration, although a British resident continued to pay the rent, the building being used to store all the possessions of British residents, who had been obliged to abandon Mallorca. When the Civil War ended, permission to resume services was granted only because the rent had been paid throughout the war. No other denominations were allowed to hold services.

No proselytizing was permitted so the only indication that this was a Church was a sign saying “Please close the gate” when there was a service being held. A Guardia Civil stood at the back of the church at each service.

A retired clergyman, Rev. Philip Coleman, started regular services with only the collection as his stipend. The Anglican Chaplaincy of St Philip and St James was thus born, being named after him and the Archdeacon at the time James Johnson. The congregation at that time was mainly made up of elderly people who had retired from diplomatic service overseas.

A fund had originally been set up in the early days to build a church. This was restarted in the 1960s and money was then raised bit by bit by congregation members holding coffee mornings, wine and cheese parties, and the first-ever bazaar (now an annual event securing much need funds for our financially independent church). No large donations were received but eventually, enough was raised to purchase a plot in Son Armadans, a site central for most members.

The original architect offered his design free but the then chaplain Edmund Capper did not think this correct and another architect was chosen and paid. Local builders from Genova were contracted. The wall behind the altar was finished by an elderly worker who used darker stones in a pattern with a specific meaning but he died before revealing what it was. It is believed to represent the 12 apostles.

The furnishings, including the piano, were brought in from the old Terreno building. A second-hand organ was only purchased later. A font of Santanyi stone was installed. A triptych by the renowned artist Krekovic was later donated but he was not informed we are dedicated to St James the Less and so portrayed Santiago the patron saint of Spain.

The hall built under the church was named the Coleman Hall in memory of Fr Philip. Initially, there was no house as there was a Chaplaincy House, donated by Mrs Gauntlett, in Terreno. The Church house was added soon after the inauguration for the sake of convenience and was remodelled in the late 1970s to add a bedroom and bathroom on the first floor. Air- conditioning was only installed recently.

The church was consecrated in October 1966, by Bishop Eley with Edmund Capper continuing as chaplain. On that day a donation from the Benham Trust allowed the Church to be consecrated free of debt.

Since that time we have willingly allowed any other Christian community to use the church for their services when so requested. Fr Capper was followed by an American, Fr Ed Riley, and then by a young family man Revd Macklin, who did not stay the full three-year term. Fr John Moody was then appointed. During this time the congregation continued to be elderly but in the 1970s younger couples and families began to attend. After Fr Moody left, Fr Hedley Pickard was appointed. Hedley’s wife, Peggy, participated actively in the life of the church and was one of the organists. As a former sports journalist and TV commentator, Hedley was anxious to make the Anglican presence on the island more visible. As well as starting the tradition of writing a weekly column in the local English newspaper, the Daily Bulletin, he attended many social events representing the church and this was given a write-up in the paper. Hedley held fortnightly services in Pollensa and Cala d’Or as well as twice-weekly in Palma, with occasional services in Andratx and Soller. He also traveled to both Menorca and Ibiza for regular monthly services as they were not yet separate chaplaincies.

He was passionate about visiting the sick at home and in hospital as he had done in the UK and set up a team of hospital visitors to work alongside those at the consulate. Junior and senior Sunday schools were set up with annual Sunday school outings to local places of interest when the youngsters were joined by church members. There was an active youth club that met weekly, unfortunately competing with bars and discos. Father Hedley was ably assisted by Father Angel Rubio, a Spanish former Jesuit priest, and Doctor of Divinity, who, after becoming an Anglican priest, served for many years in the UK before retiring to Mallorca. He is remembered in one of the stained glass windows, baptizing a child. His wife was also very active and well-loved.

During this time we became fully part of the ‘Diocese of Eurpe’ legally so losing the independence of decision though gaining in other ways. After Hedley Pickard returned to the UK, Fr Richard Mathews was appointed and he served for three years. During that time the church lost prominence on the island as he did not approve of the social image of a chaplain.

He was followed by Fr Frank Millar, who tried to attract new members, especially the young, again. He held weekly Sunday afternoon family services. He also started the weekly Mother and Toddlers group, which continues to this day although the name has changed several times. A chaplain was appointed for Pollensa at the same time, though still under Palma. Pollensa later became a chaplaincy in its own right, although is now back under Palma.

During the time of the next chaplain, Fr Jim Hawthorne, many improvements were made to prepare for the 25th-anniversary celebrations. These included buying a new organ, funded by many social events as well as donations from benefactors. A credence table was donated and new ceremonial vestments were also donated anonymously. The original plan for stained glass windows, which had never been implemented due to lack of funds, was reconsidered.

Nils Burwitz, a world-renowned artist living in Mallorca, was commissioned to draw up the design for stained glass windows at the rear and side of the church. Together with a Catalan glassworker, he set to work to make the windows a reality. Work was on such a tight schedule that the last windows only went in during the week of celebrations. All windows were privately donated.

Celebrations, which went on for over a week, included an organ and choral concert, the dedication of the new vestments, credence table, and stained glass windows, a harvest supper, and concert, and culminated in a grand black-tie dinner dance at the Club Nautico.

A well-received monthly magazine “Chaplains” aimed at the island population in general was started although it eventually had to be closed as uneconomical. The Garden of Remembrance was also created in his time and has given many hours of comfort to those whose loved ones are remembered there or even to those who just wish to sit and meditate.

Father Robert Ellis, another married priest, followed and kept the high profile Father Jim had worked hard to recover. He used his BBC connections to organize the television series ‘Parish in the Sun’ showing life in the chaplaincy. The solid wood doors were replaced by glass doors to unite the church with the outside world. To comply with new legislation for the disabled, a lift was installed to connect the church, patio, and hall.

After an inter-regnum, Father David Waller was appointed. He served until November 2019, when he was appointed Archdeacon.

Another inter-regnum followed and continued for nearly two years during the pandemic. Ron and Viv Larkin of the Uniting Church of Australia held the fort during this time. Canon Dr. Ishanesu Gusha was inducted in May 2021. His wife, Caroline, is setting up a branch of the Mothers Union, the first in the Balearic Islands.