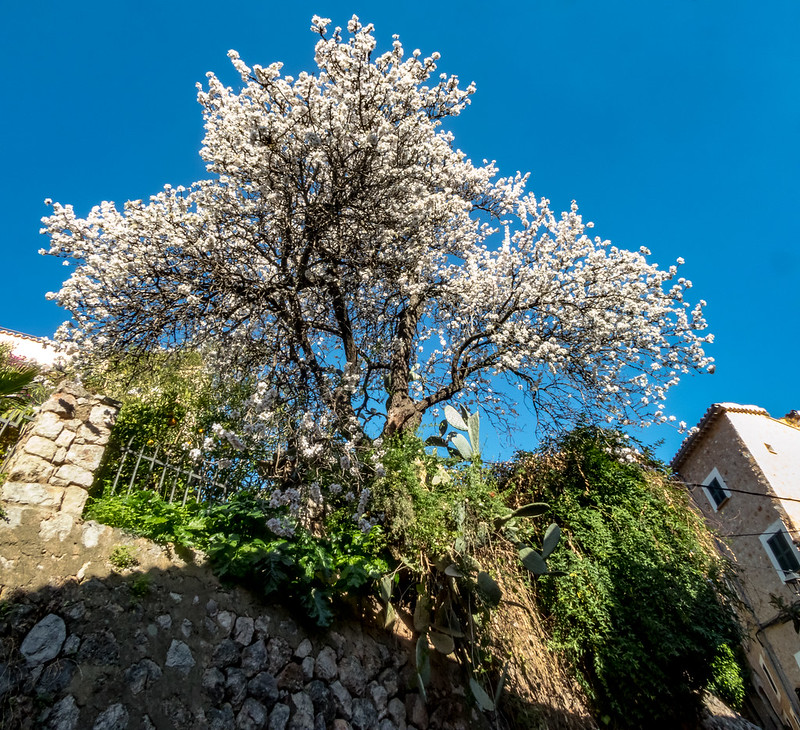 The walks of Mallorca are well catalogued and the decision to create the routes 221 and 222 were inspired. Eventually, using these routes a walk around the whole of Mallorca will be possible. Of course, for such an enterprise this was a monumental amount of work. The negotiations on access and creating walkable pathways have been a life’s work for some.

The grandchildren and I can pick up the 221 from many places in the Soller Valley and we all have different criteria. Mine is to do with the knees and not climbing much. The girls will be goats and push on to see what is over the highest ridge. When we walk together they watch the path for me and we amble along together. We are not having the fastest walk in the world but it is always very beautiful.

We wandered the paths of Raixa and the Juan March Hospital grounds in glorious weather this week. We were on a blossom hunt but it was slightly too early to get the full glory. We have wonderful blossom fields at this time of year but they are influenced by how cold it is and if the trees get enough sun on any given day.

Straight down the Soller road towards Palma you arrive at the right turn for Raixa and left turn for Juan March Hospital. Work is due to commence this week on a roundabout at this junction. A long overdue piece of roadwork now that Raixa is becoming so popular and used for many official functions. The ‘Caubert’ roundabout will be the fifth on this road and this has caused controversy. Roundabouts mean slowing down and adding a couple of minutes on the journey, which is not always popular.

Also at this point there will be coaches going into the Raixa hinterland and that manoeuvre will cause even more delay. For every solution there are always challenges but this decision has been made. The expectation is of a six month works programme which will inevitably cause more delays on the main Soller road. Everyone using this, one and only, main route, will have to allow more time for the journey.

I am a big fan of the lanes which end at the Juan March Hospital. The Joan March Hospital was inaugurated in 1920 as an anti-tuberculosis sanatorium. Currently, it is a public hospital specializing in the care of patients with respiratory diseases amongst other services. This wonderful location has long had the eyes of developers on it, but currently it is a well loved hospital.

In its busy sanatorium days the Soller train used to stop near the entrance to allow the staff off. The Soller train has many little halts and stops used in the past for workers. All revolutionary at the time. This was the day the train was used for local transport and the movement of freight to Palma. The tourist days weren’t even a twinkle in the eye at that time.

Our walk was that of ‘one big house to another’. From Raixa you can wave at the hospital and from Juan March the same. Two big estates on opposite sides of the main road each with their own history to tell. Filming at Raixa is well known including the Agatha Christie ‘Evil under the sun’ filmed in 1981. Juan March has rooms with large balconies where the TB sick spent a lot of their recovery time. They would have been very familiar with the view of Raixa across the Valley.

Our hunt for blossom was limited but the meadows of sorrel were stunning. A carpet of yellow which increased in its vibrancy as the sun became a little warmer. We walked the lanes with dog walkers and the odd serious walker following a Route 221 map.

This is our season for walkers now and so many will be deciding which are their favourite walks. The main road to Soller is filled with parked cars at weekends as many groups join with their sturdy boots and walking poles. For us to do this on a weekday with largely ‘nature and natter’ as our companions was a treat.

The world seems an easier place when you are walking amongst great beauty. The mountains, the meadows, the history and our footprint for the future were all there on that great ‘Nan’s Day Out’.