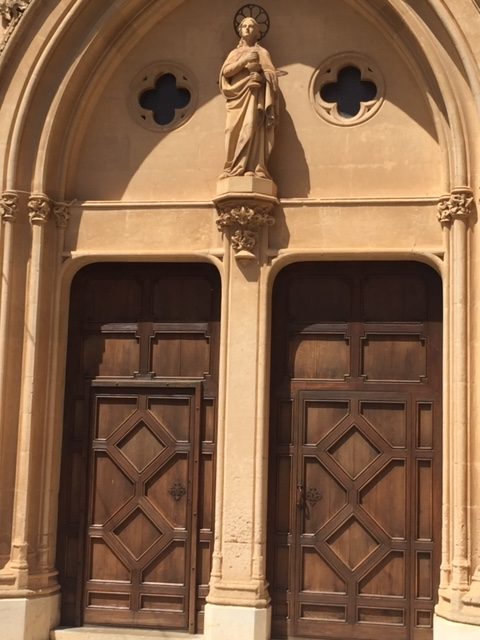 To drive to the very middle of the island was my mission of the day which was not a mid week experience.  A Wednesday visit to Sineu is commonplace as it has a great weekly market.  The only market on the island which still continues to sell livestock.  Sineu stands proudly in the centre knowing that in days gone by it was very important and laws were made here.  A fine church and many houses resembling mini palaces were built and the richness of farming in all its aspects is celebrated in this town. These days it is a very smart place to live and the town spreads out with plenty of new build apartments and cafes and restaurants.

Its position in the heart of the island means that it is a favoured point for hordes of cyclists making their way from one side of the island to the other.  It is also part of the commuter land of Majorca with its hourly train service to Palma taking just 45 minutes. Once the market is over on Wednesdays and the sweep up is done then Sineu settle to being a sleepy, affluent town. Proud traditions and fine dining are to be found here. For incomers it is a place to replace the numbers of the young of Sineu who have left for the coast or the Peninsular.

To walk amongst it as a normal town is fascinating wander into old Majorca.  The elderly sitting, socially distant on the park benches, were talking the afternoon away.  The children, just out of school were playing on the swings and the odd visitor was a point of interest. You stand out as not being local in this kind of place.  People are happy to see you and talk but they know you are not from ‘round these parts’.  Tell them you have driven from Soller and they think you have taken leave of your senses.

My elderly new friends were anxious that I visit the parish Church of Santa Maria as this is a must-see for many tourists visiting the area owing to its impressive 7-level bell tower and a small museum of medieval pottery.  Then I was sent to the Convent de la Concepció which has a’torno’, a small revolving door through which you can purchase pastries made by the nuns.

I did just that and then headed for the back lane route through the fields which took me to Petra. An 11 km journey through the farming fields and vegetation of this lush growing area.  Petra has a famous or infamous son, depending on your point of view.  You can visit the church he was baptized in and the museum dedicated to his memory.  Without the connection to Father Juniper Serra Petra would be one of those places there would be little reason to visit.  That is unless you were trying to get a feel for rural Majorca and its history. A train station with a train an hour to Palma gives a clue to its life today as a rural commuter village, much beloved by those who want a life of contrasts.  Busy Palma lives during the day and then sleepy Petra for the evenings and weekends.

As for Father Juniper Serra he was a priest who was plucked from Majorca to help create the Missions in California.  It is here that the story begins to be a problem.  The cruel colonialism of the era was no stranger to the church and the priests. His canonization in 2015 was a cause of controversy and is hotly debated whenever his name is mentioned. The history of the missions and the treatment of native Indians is a huge story and would take many books to uncover all the nuances. The fact now remains that he is a Saint of Majorca and many people make the pilgrimage to Petra, in the sleepy mid lands of Majorca to pay homage.  Many of them are from America and most from the mission schools that bear his name to this day.  Petra is forever on the map for this reason and enjoys the benefits of all the visitors to the village.

The opportunity to take time out and visit the middle of the island was a pleasure in the sunshine and amongst the glorious scenery.  The drive back to the mountains of the Soller Valley was next and home again to my very different world.  Majorca continues to amaze as just driving for an hour can tell new tales and introduce the difference a journey makes.