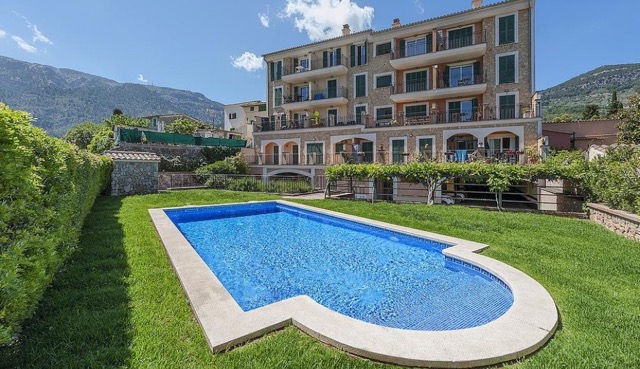 This is the story of an apartment block in L’horta in Soller, half way between Town and Port. This was a typical new build block of the area. Started with money, vision and good intentions.  Half way through the process the money ran out and it remained unfinished and unloved.  Eventually the developers and the banks, got the place moving by selling at a good price and the community was born. This story was the same for the Montemar Apartments on the Repic Beach and the blocks near the Calatraves Park in Soller.  There is just something about a new build block in Soller which will end up as a bargain for some.

Apartment blocks are no longer allowed to be built in the Soller Valley in 2020.  That is unless, ancient permissions for land can be dug out. Apartments are at a premium and if you have a lift, pool and car parking you have the golden key. This seems very strange now when the history of the apartment bargains of the past are told.

Block 45 has a communal swimming pool, garage, lift, a bit of a garden and a great location half way between town and port. This made it a favourite for holiday lets.  This is how it spent its early years as a favourite home from home for many Swedish, English and German visitors. Then the need to have a ‘holiday let license’ arrived and it all seemed very complicated and expensive. Almost overnight the block changed and long term lets or new owners moved into the 24 apartments.

Everyone was all new together and in the last three years the sound of suitcases rattling through the building on changeover days has completely stopped. The locals, the workers and the Swallows have taken over and live their Solleric lives.  We have lovely babies born in that time and a mix of young and not so young co existing. Until the stay home experience, we hardly knew one another except for our nearest next door neighbour.

The tales the occupants tell are all typical of the Covid world we are living in.  Bright, attractive multilingual couples attracted to the world of the Jumeirah and the Bikini Island Hotels live here. They work hard and as the season ends they leave this world and head back to visit their families.  They are the ones who had just arrived back in our block to start their 2020 season.  Instead they are locked down with the rest of us with family far away and only a few work colleagues in the general area. They sit and wait for instructions from their employers as none of them know if there will be a job for this year after all.

The same can be said for the waiters and waitresses who live here.  Some with babies who need looking after by grandparents so they can work.  What do these families do? Our block is just a snapshot of the lives of the people living in Majorca right now. Others live here who are in the employ of the Town Hall. They are largely working from home until next week when they have been called in to the office again.  This is being objected to and the unions are involved so who knows the outcome of that one.

Then there are people like me typing away at the computer or in some cases talking very loudly.  There are podcasters in the building and their intonation and pitch can be heard outside their doors. The odd Doctor lives here but haven’t been seen for some time as they are sleeping at the hospital doing great work.

Amongst the apartments there are some which remain shuttered and unloved.  They are the ones that belong to the second homers who just cannot get here at the moment. These Humans of Majorca are just desperate to take up their six month lives here.   They have no objection to being quarantined for two weeks and consider it no price to pay. The Soller Valley is calling them very loudly but they just cannot respond.

A season in the life of a block of apartments in Soller is strange subject matter one might think. I write this today because this is part of a pitch for a UK TV Series.  Who knows how far it will get in the world of stories evolving out of of this crisis.  Early indications are positive I am told. You, the people of Majorca, heard it hear first. ‘Desviament 45’ has a good ring to it don’t you think?

One thought on “HUMANS OF MALLORCA IN BLOCK 45 (Camp Llarg)”