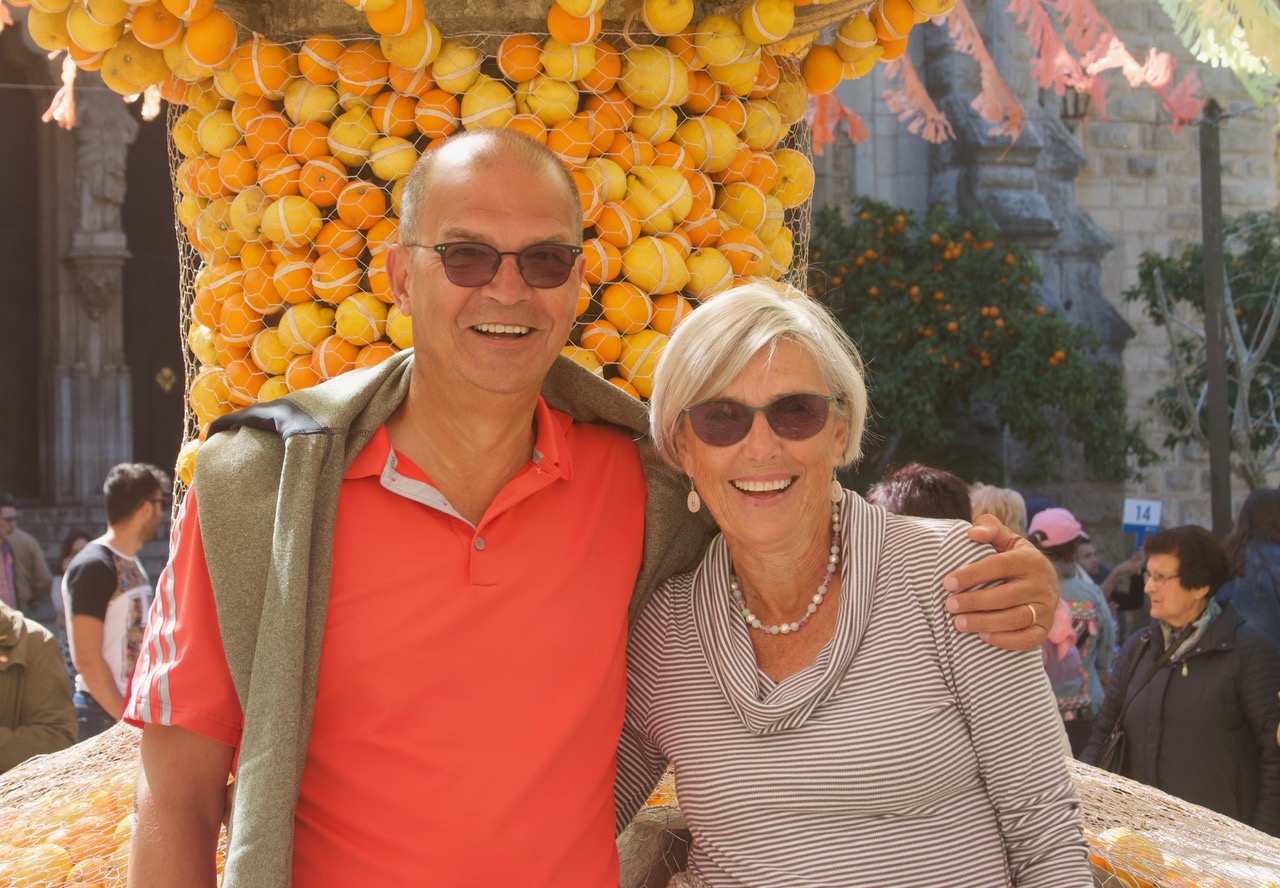 Today I bring you the words of Gary Lloyd Rees, a regular swallow from Canada who joins us annually.  Kate and Gary are a lovely couple who bring a great camera and add to the Soller Valley photographic collection each year.   They have an interesting story to tell and are honorary Sollerics. We are delighted welcome them back every year.

‘My wife Kate and I were born and bred in the UK: Kate in Torquay and myself in Dover. In 1998 we took advantage of the opportunity to emigrate to Canada through my employment in the City of London with the Royal Bank of Canada. My new job was based in Toronto, and we lived 90 minutes away in the Canadian “bush” – I assured concerned work colleagues that 90 minutes was just a regular UK daily commute. One daughter moved with us to start university in Toronto, one daughter stayed in the UK (at university studying Business & Spanish) and our son at that time was already living and working in La Manga, Murcia in mainland Spain.

We had visited Spain every year for several years before our move, and have visited every year since, incorporating visits to our son and his growing family on each trip.

In 2001, my work took us to Sydney, Australia to live for a few years followed by stints in London and Luxembourg whilst maintaining our new roots in Canada. By the early ‘00s we had both gained Canadian citizenship, which means that we hold dual citizenship as we could retain our UK one. In the late ‘00s I was back working in Toronto, albeit with a much shorter commute than before.

The year 2008 found us researching locations in Canada to plan for our upcoming retirement in 2010. We wanted to be somewhere with a small-town feel, with nearby open countryside, near to large city amenities and finally, and probably most importantly, near the water (having both grown up in coastal towns). One weekend we read a newspaper article about “Ontario’s West Coast” – we went out for a visit one weekend, staying in the small village of Bayfield on Lake Huron. We were hooked – we bought a plot of land that weekend on which to build our future retirement home.

A few words about Bayfield: it is village of just over 1,000 inhabitants whose population swells many times over in the summertime when the city “cottagers” vacation in their second homes. It is a tourist destination, with a main street full of quaint and unique shops, art galleries and several excellent restaurants and inns all located in heritage buildings. It also boasts a large and active art community and some of the best sunsets in the world.

Bayfield is located about 2 ½ hours drive due west of Toronto and a similar distance north-east of Detroit in the US. Not only is it located on Lake Huron, it has a river running through it which is home to the largest marina on the Canadian side of Lake Huron. There is actually a lake fishing fleet based in Bayfield. Lake Huron itself is the second largest of the five “Great Lakes” of North America – at its furthest point it is over 300 km wide and long – its surface area at 23,000 square miles is over 16 times that of Mallorca. Due to its large size and shallow depth it displays all the characteristics of a sea; however, in the winter in completely freezes over.

We are pretty well travelled – we have been to all 7 continents (and lived in 3), visited over 70 countries and all 15 autonomous regions in mainland Spain. However, apart from one week that Kate had spent in Magaluf in the early ‘70s we had not visited Mallorca. A good friend recommended the north-west of the island to us – specifically Soller. We visited for a few days in 2012 as part of our annual trip to Spain, staying in Soller in a small boutique hotel with 700 orange and lemon trees in its gardens, and just like our first experience with Bayfield we were smitten by the charm, peace and beauty of the place.

After that first visit, we returned for a few weeks in May of both 2013 and 2014 having located a property to rent within 200 yards of the hotel. Our son, his partner and family visited from mainland Spain and were so taken with the place that they booked their wedding for the summer of 2015 in a hotel in Soller port. All the immediate family, (including 9 grandchildren) and many friends, made the journey from mainland Spain, UK, US and Canada for the wedding, which took place on July 1st, Canada Day, probably the hottest day of 2015.

Unfortunately (or rather, as it turned out to be, fortunately), we were too late to book our time slot of May for 2016 so we had to miss coming that year. By then we had weathered some 15 winters in Canada and the novelty of snow, ice and freezing temperatures had definitely worn off. Many of the Bayfield residents are what North Americans call “snowbirds” in that they fly south in the winter months to places like Arizona, Florida and Mexico – similar to what are called “swallows” in Mallorca. We had no desire to winter in the US or Mexico but decided to try spending part of February and March in Soller – so that is what we started doing in 2017. Staying in the off-peak we have made many great local friends and relationships and have discovered that, like Bayfield, however charming a place is it’s actually the residents and the local community that make a place become “home”.

Since then, each year we have booked and stayed a little longer – this year we booked for 9 weeks and were due to leave on April 5th.  On March 4th we flew to Alicante to visit family and flew back to Palma on March 8th – at that time we were, with hindsight, somewhat naïve as to what was about to unfold. Just one week later, on March 15th, the “State of Alert” was implemented and the following day the Canadian Prime Minister (Justin Trudeau) announced “Let me be clear: if you are abroad, it is time to come back home.” As it transpired it was already too late to do so safely and we decided that the safest thing for us, and also for our friends and family back home, was to “shelter in place”.

For now, like everybody else in Mallorca, we are hunkered down and minimizing our exposure to others (and vice-versa) and venturing out for shopping only when strictly necessary. Unlike many, we are fortunate enough to have a small garden, so we are able to exercise by walking round and round and round. Without fail, we join in the daily “balcony clap” and with the recent change in clocks can now make contact by waving at people who before we could only make out by the light of their phones.

As well as following the statistics for Mallorca, we closely follow those for Murcia, the UK, Canada, Australia and the US where our immediate family and close friends live. It is apparent that we, in Mallorca, will be the first to “crest the curve”; however, that is small comfort when reflecting upon the tragic loss of life across Spain and elsewhere, and whilst the situation continues to get worse where friends and family are.

We realistically don’t expect to be able to travel back to Bayfield for several more weeks and have contingency plans in place for that. We also know that it is going to be bitter-sweet when the time comes for us to leave Soller and go back to Bayfield, as we feel as much home here as in Canada.

The snow scenes we leave every year

We have already booked for next year – this time for 10 weeks – and have a standing reservation for February and March which we are contemplating stretching to include January as well.’

Humans of Mallorca come from all over the world or they were born right here. Kate and Gary are incomers who love everything we stand for and have shared our darkest moments of the Corona Virus.  We will certainly welcome them back next year and for ever after that. They are one of us…

One thought on “KATE AND GARY ON LOCKDOWN IN SOLLER”