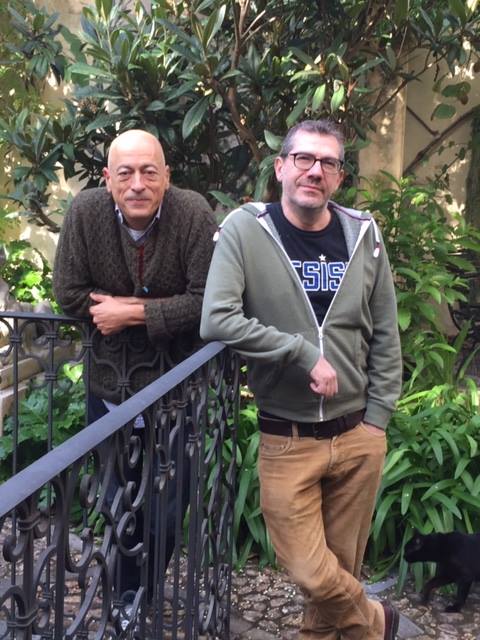 The story of what brings people to Majorca is a fascination for me because every one of them does have a story. In the case of Barry and Pablo they have two stories which met in Madrid. Humans come from all nationalities to this island and they each bring their skills and past life with them.

Let’s take Pablo first, he started life in sunny California and developed his academic studies in a serious vein. He studied Classics, Philosophy and Theology. Then graduate studies took him to Courtaulds to discover his life long passion for Art History. Time spent with the Victoria and Albert Museum in London and with Sothebys gave him his credentials and developed his skills. Historic House Restoration took him to Dublin where he settled with a shop in the centre – on College Green. His eye for style and detail earned him clients that he still works with today. Vast historical restoration projects and matching textiles to the era became his day to day life. The shop was his window on the world to show what he could do. since then Pablo works best from a shop front. Next stop was central Amsterdam with another Espinoza & Co shop and Dutch renovation projects.

Eventually the Californian in him was yearning better weather and sunshine and Madrid became the next stop and shop.

Now Barry’s turn for the spotlight and the focus on early years Dublin. Barry and Pablo did not know one another in Dublin that was to come much later. No doubt that Barry’s day to day life would have taken him past Pablo’s shop often – all part of life’s rich pattern.

Barry is a thinker and not afraid of getting involved in the causes of his time. His family held strong views on politics and causes and so does he. His degrees in Anthropology and Medieval Studies are a great backdrop to his current work for Hello Magazine!

When Barry graduated jobs were scarce in Dublin and he looked, as many Irish before him, overseas. A friend in Madrid invited him for a visit and he never went back. Everything about urban Spanish life appealed to him and that has been the case for the past 25 years.

Barry became a teacher of English in Madrid and soon realised what a murky world that was. Reputable language school existed alongside the rest. Some teachers had no contracts or job security. Barry was instrumental in the creation of Union recognition for these workers. He has never been afraid of fighting for a cause and seeing it through.

Barry’s work as a writer and translator worked alongside his teaching. His pages for Hello magazine occupied the years with special emphasis on anything historical or Euro Royal. He is an expert on all the princes and princesses of Europe and is needed for all the pub quiz questions! El Pais companies employ Barry for their in house translations and press releases. He didn’t plan it but he developed a career that was portable and could be done from anywhere in the world as long as he had good internet.

Barry and Pablo met in Madrid in 2000. The life, the weather, the art and culture of Madrid was enough for them – so they thought. The beginning of change came when Pablo’s mother decide that she wished to move to Spain to be nearer her son. She would be accompanied by her sister. Her criteria were that she wanted a Californian weather system, an interesting group of people to live amongst all within walking distance of the centre. This was the mission that Pablo and Barry were happy to accept. They loved travelling and discovering all that Spain had to offer. Looking at the map one day they realised that the Balearic Islands existed and that they needed to check Majorca out.

The island was an adventure waiting to happen. Palma was great, and the towns of the north and south were delightful, but it wasn’t till they hit Soller that all the things on Mum’s wish list were fulfilled. They had their eureka moment and enlisted the help of estate agents to show them round. They limited their search to houses near the main square and happened by an unloved, faded house with concrete for a garden. They walked away and came back a few times and the potential beckoned. For an art historian, this renovation could be done, was a decision left hanging in the air.

Life has a habit of changing things and so it was. Pablo’s mother died before realising her relocation ambition. There was no good reason for Barry and Pablo to come to Soller now but the seed had already been sown. These big city people decided to give small city Soller a try. The bought the renovation project house and began a whole new life in the Soller Valley.

Fast forward fourteen years and the house has a magnificent garden from the concrete of the past. Much of the house has received the touch of the experts and some of it is waiting for a lottery win. This is one very large property with everything needing replacing from the roof down. A Casita in the garden for holiday lets with a license was the first thing completed to give an income. All other work that Barry and Pablo do continues from their Soller home. They need their urban fixes and this is fed by regular visits to Madrid to see clients. Their day to day life other than that is Soller based and that is where the next chapter of this story begins.

There are many multicultural voices in Soller that wish to affect change. Some of them are associated with the politicians and others raise awareness in other ways. Barry was conscious that so many people complained about local environmental issues and moaned about the perceived reasons for them. He created a Facebook page entitled ‘A force to be reckoned with – Tramuntana’. This page allowed people to give voice to their local environmental concerns. This led in turn to meetings and a discovery that there are many people who want to be part of the solution.

This page has been transformative to the lives the English speakers in Soller.  So much excellent information passes through it each week.  Lots of information and a platform for lively debate.

Barry and Pablo are Humans of Majorca, they live here and are doing all they can to encourage the local community to join in and make their voice heard. Their, time, expertise and commitment shows their humanity. To talk and moan is not their style but to be an instrument for change is.

A great privilege for me to get to know Barry and Pablo and be grateful for the work they are doing in the Soller Valley.