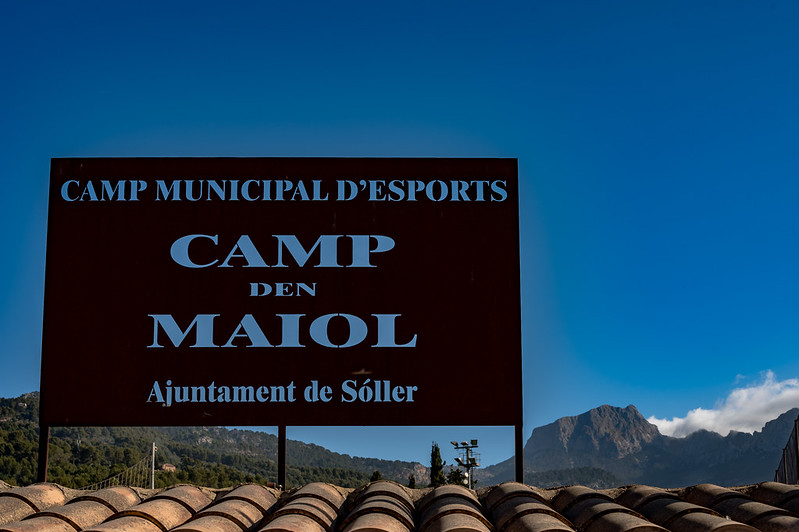 The Soller Football Club ground is 97 years old this year – its birthday is on August 24th. The stadium was built in the centre of town about 5 minutes walk from the town square. Of course when it was built it was on the outskirts of town but these days the urban sprawl has caught up with it and placed it bang in the centre. It has to be the most beautiful football pitch in the world with spectacular mountain scenery all around. It is a very well used club and has its own café within the grounds to feed the never ending supply of the Soller population who use the pitch and facilities.

It is home to the Soller Football Team who came into being in 1954. They are still looking forward to better days in the league. It is also a very significant location for hundreds of young people who use the space every week.

This is the sort of club that has hundreds of bikes left propped up against the wall. The children get on their bike and cycle to the pitch, play football and then cycle home again. The exercise regime for these children is first class and they are very enthusiastic. The children’s soccer life is very well organised with the early training programmes leading to a place with the team which is affiliated to the Spanish Federation of Junior Football.

The ‘Federation’ is much revered and it is the players ambition to be spotted by one of the Federation’s coaches and offered a place on the Team. This is certainly the children’s desire and of course the ‘Soccer Moms and Dads’ will support their children.

This is not without cost to the parents and the day their child gets a place in the team is the day their life changes. Then, it is supporting them in home games, driving them all over the Island for the away games, washing the kit, preparing food for the social events and paying the subscriptions. They get to know Majorca’s football pitches very well including the smallest villages who are so proud of their facilities.

My family know this pitch very well as Mimi, my 16-year-old granddaughter played in the club since she was 5 years old.  Every week she turned up as the only girl in the team and played football. She transferred to the superior girl’s team Son Sardina a few years ago. These were the rules at the time.  Since then Soller has begun its own all girls team which is enjoying its growth.

The beautiful game is loved on this Island and in every village.  The Soller football pitch is the memory box of generations and will carry on for generations to come…