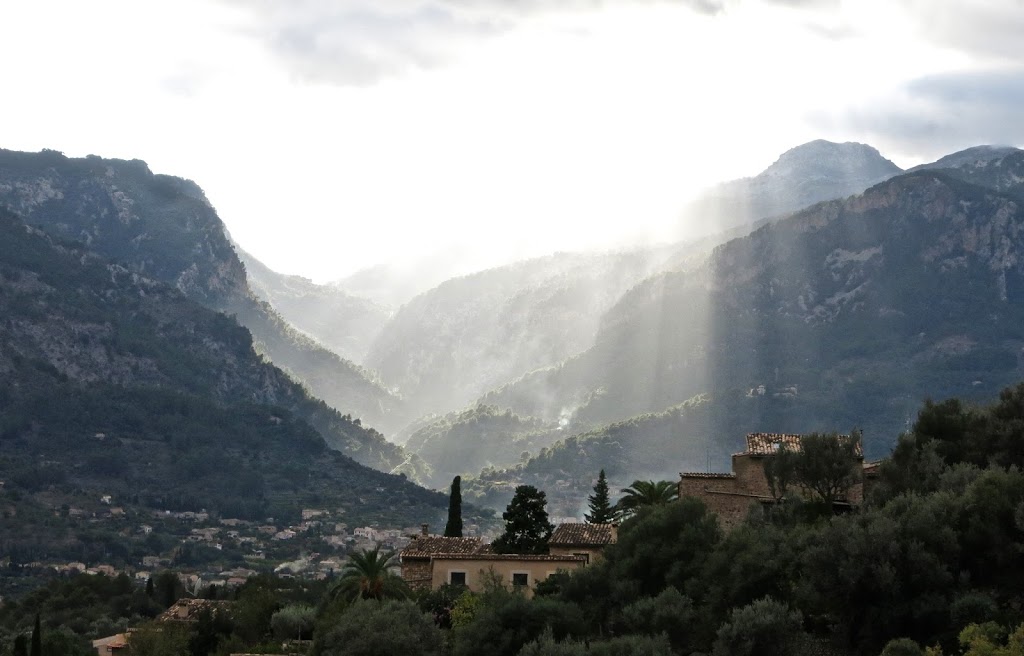 Changing times – Soller style
Written by Shirley Roberts
Photographs by Rachel Fox
Published in the Majorca Daily Bulletin on
Tuesday 31st July 2017
Twenty years ago the Soller Tunnel opened.  The road was blasted through the mountain and cars flowed freely as long as they paid the toll.  This development was hugely controversial and many did not want this to happen. Add that to accusations of conspiracy and financial irregularities resulting in prison sentences for some.  You can see that was a turbulent time in the Soller Valley’s history.

The generations of people who had crossed the Coll mountain to get to the Palma side had a lot to say.  Stage coach and horses did the route in the early days and then cars and tarmacked roads. So many of those people swore they would continue use the route with its 52 hairpin bends and never use the Soller Tunnel. The businesses on the top of the Coll who had looked after travellers for generations were delighted by their loyal customer’s response.  Alas within a month of the tunnel opening one restaurant closed and the other relocated to the Port of Soller. Everyone loved the tunnel and the freedom it gave.
The Coll has now reinvented itself as the hard mans cycling route and the restaurants at the top do a roaring trade. Twenty years ago life seemed bleak up there but now they are busier than ever.

Soller is now in the same place again, this time with the end of the tunnel charges in sight on 1st September 2017.  There are thousands who don’t want this to happen.  They see that the exclusive Soller Valley is going to be opened up to all and they don’t consider it a good thing. The complaints about saturation and parking and (dare I say it) attracting the ‘wrong’ type of visitor are many.
There is a group who simply don’t believe it is going to happen and that all the hype is simply ‘fake news’.  They are the ones that think that there is going to be a dramatic announcement in the next few weeks and that the tolls will continue to be operated until the resolution of some court case or other.

The past is the past and the future hasn’t been written yet so plans are being made come what may.  The first is to do with the supermarket tales of the Soller Valley.  The City of Soller has lots of small supermarkets and one mid size.  No mega store for the area exists in spite of rumours and plans that have come to nothing. Talk, talk and more talk about this has been around for as long as I have.  Now, we have heard it is Bunyola who may be slipping in with a mega store of its own.
Bunyola on the other side of the Coll mountain is already a satellite village for Palma.  It shares much history and familial connection with Soller and is considered by many to be one place separated by the mountain. It is here, it is said, that a major new supermarket is to be built.  This means that the people of Soller will have access to a full size shopping experience just ten minutes away with no toll to pay or time spent negotiating the queues at the entrance booths.
The Soller Estate agents are all reporting increased interest from Majorcan buyers and renters.  The toll fee has been a barrier in many people’s minds and the negotiation to get a resident discount far too hard. Now it is just to become like any other place on the island and a slice of Soller is what many think they must have. The Town Hall have a big job as they come back from their summer holidays.  The schools, parking and many other infrastructure issues have to be sorted.  An influx of new people is great in every way but the process needs a bit of management.
We are all watching the future unfold with great interest.   The people here divide up between those that embrace change and those that resist.  Both sides are vocal and will have to accept compromise eventually.  The bets are now on as to whether there will be last minute hitch in the free tunnel?  Which supermarket will be the first to open in Soller or the environs? How many of those that don’t want a free tunnel will take to using the mountain road?
Never a dull moment in the Soller Valley – you could write a book – maybe I will.