Loading...
Skip to content
A day in the life of the Port of Soller beaches
By Shirley Roberts
Photographs by Rachel Fox
Published in the Majorca Daily Bulletin
on Tuesday 30th May 2017

There are very few beaches on the North West coast of Mallorca. Valdemossa, Banyulbufar and Deia all have their Cala’s that they love. But for a proper size beach the only place in our part of the island is the Port of Soller. This is a resort with a difference in that it makes little concession to anything commercial.  No fun fairs, bouncy castles or theme parks just a rickety tram trundling the 100-year-old route from Soller train station to the Santa Catalina end of the Port. The area loves its visitors and has them daily in their thousands as this is the place the trippers get on the large tourist boat to Sa Colobra.  From there they pick up coaches to continue their scenic route by sea and land through the Tramuntana mountains. Many visitors get their first glimpse of the area using this route and then they come back again and again at a more leisurely pace.
We have fine dining that encircles our perfect horse shoe bay with new restaurants jostling for a front line position.  Sollerics are creatures of habit and it is hard to get them to change their restaurant allegiances.  I make it a rule that I have to try at least three of the new restaurants each year before I revert back to my old favourites.  I have done two new ones so far this season and I have to admit they were very good. The ‘celebrity chef’ concept is just hitting us where the venue is second to the name of the Chef.  As this particular one has joined us from the gastronomy of San Sebastian it is no wonder he is making a splash. 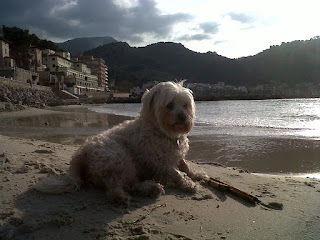 The sand on the beaches is looking great now the clean up of the winter has finished.  We have three beach areas since the Port’s renovation a few years ago and the sand is different on all of them.  The newest is in front of the Esplendido Hotel and feels like cool silk.  We watched as the sand ship arrived with that sand and it was great to watch a beach being made out of rocks and nothingness. The other two beaches are the Repic and the Generosa Beach.  The Repic is on the left when the tram hits the seafront and the Generosa is as far as the tram goes near the Santa Catalina end of the Port. These days, apart from bucket and spade life the place is known for its restaurants, live music and for the number of boats that live in our waters. 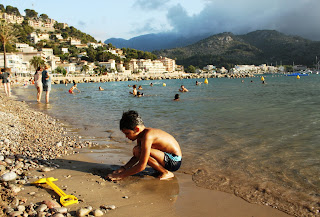 Last Friday I was hanging out on the Marina watching the finest of yachts arrive when the Army turned up.   They brought military ambulances and various ‘ready to erect’ buildings plus a lot of soldiers.  They wouldn’t let me take their picture but they allowed me to snap the ambulance to prove I was not making this up. I chatted to the the boss Army man and he told me that next Sunday the Military are running a marathon which begins and ends in the Port of Soller.  The team were there to prepare in true military fashion for the event leaving nothing to chance. This made me laugh all morning – everything we do in the Soller Valley happens at the last minute.  Lots of planning goes on but evidence of happenings is usually half an hour before.  The idea that this race was having all this preparatory work was just fascinating.
On Saturday a team of Divers gave up their leisure time and did a sea clean in the Port.  The brought up rubbish from the sea bed which included lumps of wood, tyres, tons of plastic and so much more. It was a great job and coincided with others cleaning the beaches and picking up litter.  The Half Term visitors on the beach got busy too and everyone was left with the knowledge that it is just not acceptable to leave litter in the sea or on the beach.  There are bins everywhere for rubbish but better still take it home with you and dispose of it.
My morning with the army coincided with watching a very smart tender arrive to take three American visitors off to join a smart yacht moored out in the bay. Flown from Hollywood, via London after completing a busy filming schedule was the story. We just don’t know who is around our world but we do know they are very welcome to enjoy their rest and relaxation right here in our Soller Valley world.