Many people mistakenly believe that the Immaculate Conception refers to the conception of Christ through the action of the Holy Spirit in the womb of the Blessed Virgin Mary.  However, this is not the case.  Rather, it refers to the condition that she was free from Original Sin from the moment of her conception in the womb of her mother, Saint Anne.  It is for this reason that the Catholic Church celebrates the Nativity of the Blessed Virgin Mary on 8thSeptember (i.e. nine months before the 8th December, the Feast of the Immaculate Conception).  God chose Mary to be “a model of holiness” to show his love for her as she would make herself fully available to His divine plan and service.  Her “yes” at the Annunciation undoes the disobedience of Eden and makes paradise once again a possibility for all of us.  It is for this reason that Catholics venerate Mary. 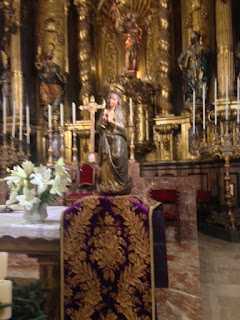 The Feast of the Immaculate Conception is consequently a very important day in the Catholic Church and, as such, it is a public holiday in Spain and therefore in Mallorca.  In Soller, there will be a Vigil Mass on the 7th December at 7.30 p.m. at La Parroquia de Sant Bartomeu in the main square and Mass will also be celebrated there at 11 a.m. on the 8th.  As can be seen from the photograph above, a special statue of the Blessed Virgin Mary has already been placed next to the alter in preparation of the Feast Day.  The church in Biniaraix is in fact dedicated to the Immaculate Conception and Mass will be celebrated there at 10.30 a.m. on the 8th.  All are most welcome to attend.
Debra Reynolds – Religious Affairs Correspondent and Soller Resident