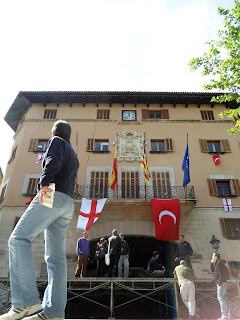 In any community there is an identifiable heart and in Soller it is very clearly apparent.  The City square is overlooked by its Church and its Town Hall standing side by side.  Both buildings have their back to the mountains and their faces focused on the City in front of them and then on to the sea.  From the rooftops of the Town Hall you can glimpse the ocean and the lighthouse way in the distance.  I set the scene of this today to marvel at the significance of the Town Hall steps.  The design of the building gave a natural stage as the entrance to the administration that goes on behind the elegant façade and beautiful staircases.  This stage is used regularly for so many events and is the focal point for gatherings in our community. 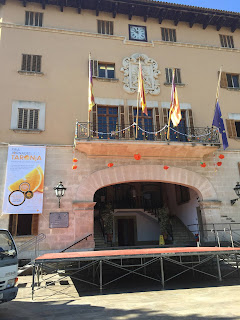 Last Friday the Peace Tree was installed on the steps and at 11 am the Mayor and local councillors gathered there with hundreds of local children.  The purpose of the meeting was to read a declaration against Gender Violence and to register Soller’s desire for people to live freely without fear of violence and intimidation.  This action was repeated in many other places in Majorca at the same time and solidarity with victims was shown by all.
On Saturday the Town Hall steps were taken over by all things Recycling.  We had a recycling event to enable people to understand what they should do with their rubbish and how to dispose of it in an environmentally friendly way.  Many other places in our City took part in this event but the focus was back to the Town Hall. 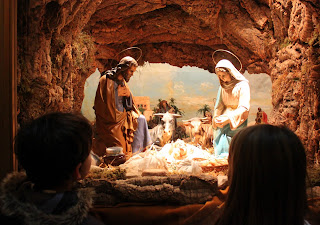 The traditional Belem showing the Nativity scene is a well loved feature of the Christmas season.  The Soller household Belems are a beautiful peep into our world when the entradas display their Nativity scene using their family heirlooms.  The Town Hall stage is the site of the City Belem and encourages everyone from the youngest to the oldest to climb those steps and see the cities contribution to the Belem season.
Every time there is an event in Soller that needs a full stage it is added on to the front of our Town Hall. This is a natural auditorium setting and with seating provided out front becomes a huge open air theatre space. This is the place for music, dancing, theatre, children’s performances and so much more. Every month in Soller there is an occasion which necessitates a stage and reminds us of the circle of life in Soller.

Our Town Hall is the centre of all things administrative for us and we are frequent visitors.  To go inside and see the huge portraits on the wall the the Mayor’s Chambers is of particular fascination for me.  One of the Portraits is of Maria Mayol Colum who is a true pioneering heroine of Soller. Her story is fascinating and she has played a huge part in making the Soller women what they are today.  She was born in Soller, studied in France and then returned to Soller to form the highly influential ‘Promotion of Cultural Development of Soller Women’ organisation.  She and a group of like minded women were the feminists of the day and went from house to house   to invite women to join their literacy classes and learn of the political issues of the time.  This was met with huge resistance by the local families who saw no benefit in educating their wives and daughters. The only library in Soller at the time was ‘men only’.  Not to be outdone Maria Mayol set about creating the rival library which was ‘women only’ and situated in the main square.  The library offered literacy lessons, a comfortable place to sit and read and the solidarity that a growing organisation could bring.  In time this produced writings and poetry that are revered today and left a permanent impression on the City of Soller.
Maria Mayol died in 1959 and life changed for Soller women beyond recognition in the years following her death.  Writers and historians began to value her work and the contribution she made to her era in politics, education and the written word not to mention her library.  The day came in 1992, thirty-three years after her death when she was honoured by her town.  She was proclaimed ‘An illustrious child of the City of Soller’ in a ceremony attended by the most important dignitaries that Majorca had to offer. 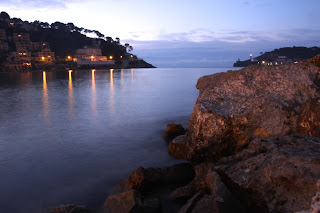 Her portrait has pride of place in Soller town Hall and is worth a visit to see.
Soller Town Hall is so much more than a building and it is at the heart of all that Sollerics do right here.  You are very welcome to come and visit and see all this for yourself.  A great winter visit for all…