Loading...
Skip to content
Ninebot Ninjas begin in the Port of Soller
Published in the Majorca Daily Bulletin
Sunday 29th May 2016

Down in the Marina amongst the fishing boats and nets a revolution is taking place.  Alongside the old school traditions of the past the latest in technology and robotics share the space.  This is the Soller Valley after all and it has a tradition of fantastic innovations rising like a phoenix out of the ashes of its glorious past.  If you were going to launch a company with an immediate tourist application and an all encompassing vision for the world where else would you do it but here. 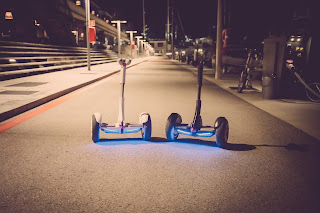 The Port of Soller is the business place of choice for the fine people behind Ninebot but they don’t live here.  The brains for this enterprise come from over the mountain in Alaro. Let’s meet Nick Magliocchetti who arrived in Alaro as a temporary stop with his family a couple of years ago.  London called them back but the family couldn’t let go of the Majorca they had grown to love with a passion. Nick’s world in the UK and in many other places round the globe is one of high rolling big business in the technology industry. He works with household names as an investor and advisor with a retail bias. He is passionate about the part that technology will play in the future and is a huge investor in concepts that others would dismiss as fanciful.  He has seen the future and he knows that the investors of today have to take their thinking and understanding to an altogether different level to make any sense of it. 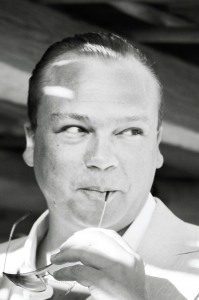 Our next new friend is Pancho Perez who made the journey to Majorca from Ecuador some thirteen years ago. Pancho and his family also live in Alaro and it was the location that brought him into contact with Nick and the business that grew from their shared values.  Pancho is an internet computer man who has made his living behind a computer screen for many years. He is a passionate believer that the earths resources are better served by the developments of new technology and innovations and that the future is electric. The combination of the shared knowledge of all that was possible and the fascination with the new transportation products of the Ninebot made their business association complete. 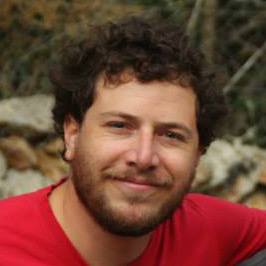 At its simplest the Ninebot Ninja is a tourist attraction.  The Segway’s of the past have now been taken over by The Chinese vehicle maker Ninebot.   The Beijing based firm did not declare what they paid for this except to say that 54 million came for Xiaomi the smartphone maker and investment firm Sequoia Capital. The ability to control the movement of the Ninebot machines from the smartphone is a crucial factor in this invention and part of the bigger picture. 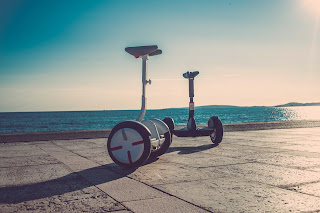 The Ninebots are personal transporters, they are not hover boards or electric toys.  They are lighter and slicker than the original Segway’s and have thousands of personal and business applications. The ultimate vision is that everyone will one day carry these around in the boot of the car and then park and ride in to town centres on their own eco friendly machine. The out of town car parks will have new meanings when an easy form of transport exists to take people from them on their own machine.  The family of electric machines designed for the purpose include cars, bikes, scooters, skateboards and rollerblades. 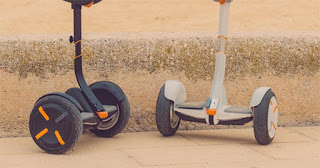 The Tomorrows World aspect of all this will happen much faster than anyone can guess but for today its all about the launch.  This week sees the Ninjas take to the streets of the Port of Soller.   They are the leaders of the sightseeing groups and the ambassadors for the product.  Everyone is stopping the Ninjas and asking for demonstrations and explanations.  At the Palma Boat show and the Internet Technology Fair in Palma last week the people couldn’t get enough of the Ninebots.  To watch the one wheel Ninebot operate from the remote control of a mobile phone is a sight that many enjoyed. 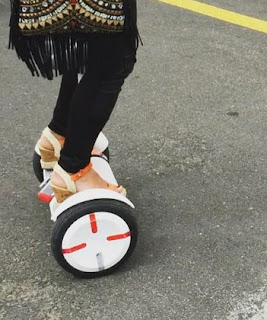 Meanwhile back in the Port of Soller, Pancho and Nick have held their meetings with the Town Hall and the Mayor and explained their concept. The tours will be guided and controlled by a leader.  All will wear helmets and the leader will have the ability to set the speed limit of the Ninebot via the technology. The route of the tours will be from the Marina end of the Port of Soller up to the Lighthouse on the other side of the bay. This is a beautiful route alongside the sea on the newly paved seafront surfaces.  The riders will have viewed the safety video and had their practice session before they start. They will all have learnt the company mantra ‘Step up and think forward’.  This is all it takes to set off on the Ninebot for a great holiday experience.
There will also be private hires of the Ninebots so that people can have their own machine on tap for the duration on their holiday.  Visitors are very excited that the machine is portable enough to live in the boot of the car and then come out in different place in Majorca to continue the sightseeing experience. The insurance for individuals is on a personal liability basis and fully explained at the time of rental.
The maximum speed that that the Ninebot travels is just 6 kms per hour. This makes it a gentle journey with enough time to be conscious of the route and the beauty along the way.
The machines on hire will be added to as the season develops and the one problem they envisage is in the number of offers they will have to sell the stock.  From their base on the Marina in the Port of Soller they will be frontline as the yachts come in to stay. The sales of Ninebots to the yachting world is one of the fastest growing areas of work. The yachts with all their toys on board will no doubt need at least one of these to add to the stable. The yachties need have no fear as a swift delivery of a Ninebot to anywhere in the world is what they specialise in. But they can’t have the ones reserved for the Port of Soller Safaris.
This is the year for many new businesses to take their place on our Island.  The austerity years have allowed planning and thinking time and 2016 is seeing one after another of them seeing the light of day.
Nick and Pancho are on a mission to give visitors a great holiday experience and a view into the new world. The environment is helped by personal transportation and they know that everything they will eventually sell has not been invented yet. They are ready to absorb them and roll them out all over Majorca and the rest of Spain.
Ninebot and their Ninja guides will be a familiar face in our towns and cities in the not too distant future. The people of the Soller Valley will be proud that the launch was here amongst the City with a ‘can do’ mentality and appreciation for progress and development. It is very comforting to know that here in the heart of tradition and respect for the past there is still time and acknowledgement given to the very latest that 2016 and beyond can bring.